Honey Buzzard. My UK record is two sightings back last century. A few in France of a similar vintage, and then nothing until a brief but clear view near Lisbon a couple of years ago. The fantastic news they had returned to Swanton Novers saw me getting up at 7am on the first available morning and driving the 100+ miles to see them.

A breakfast at the excellent Waitrose cafe in Swaffham - my new favourite place - and then it was quiet roads, then almost deserted country roads until I pull into a field rammed full of cars and old men with telescopes. Something told me I was in the right place.

You know when there's nothing happening at a twitch. People just stand around chatting. That's how it was. I spent my time scanning, and picked up distant raptors, mainly Buzzards, but a Sparrowhawk did throw me for a while. Someone called out a Hobby behind us, but other than that just chatting, as you do. Apparently from photos five different Honey Buzzards have been identified.

An hour passed, I guess, then a shout and there it was. Despite the number of people present, it just seemed to appear high up and heading in our direction.

I'd taken the precaution of scouring You Tube the night previously, and found this fantastic video by Mark Mallalieu, hosted by the Sussex Ornithological Society. So when I had my first decent view of a Honey Buzzard in flight, I was reminded of the comment that (I paraphrase) whereas a Common Buzzard looks quite stocky and heavy, a Honey Buzzard is all wings and tail. And that's how it looked as it lolloped along in our general direction. Scope view showed some barring but the light didn't help, and someone said 'its the one with a notch in the wing' which it had.

Then it climbed up and clapped its wings behind its back. There was an audible purring from the crowd, a spontaneous collective appreciation of the display, as if we were watching some special section of an Attenborough documentary. In a way, we were, this display behaviour from a large raptor is special stuff, and it treated us to this for a while, circling its area, before gliding back towards the wood.

And that was it. Possibly five minutes at most.

I left, as there didn't seem anything to be gained by waiting possibly another few hours. But that was a pulsating exciting display, something I'd not witnessed before, of a bird that has a special place in my list for no good reason other than it is spectacular and, on these islands at least, scarce.

Madness? I'm not sure what the maddest aspect of this is. Driving over 200 miles, standing an hour in a field, all for five minutes viewing at most, or thinking that it was absolutely worth it and I'll do it again soon.

The second in an occasional series of orchids two weeks past their best.
I had been vaguely aware of Lizard Orchids on Devil's Dyke. A kind of 'I should go and see those someday' awareness. But browsing through Orchid Hunter's videos I found this clear and precise instruction of where to go.
So on the way back from North Norfolk (more anon) I followed his instructions, parked on the corner of Heath Road near Burwell, walked about half a mile along a path, over the A14 on a footbridge, then bizarrely found myself on Newmarket Racecourse with the stands in the distance, the pristine white fencing and well watered turf in front of me, and across that the continuation of the Devil's Dyke.
Once back on top it was gloriously easy. After about 50 yards my 21st century fieldcraft skills kicked in, and I followed the well worn looping path off the main path to the frizzled remains of a Lizard Orchid. A walk of not more than 100 yards produced I would guess about fifteen more spikes, mostly well past their best. I did find one still with some flowers on, fortunately, and took a few photos.
Orchid Hunter went down into the ditch itself, and probably this is the best thing to do, but time was not my friend and I'd seen what I came for. Enough to make (another) mental note that next year I need to be a bit earlier in the year.
But how odd. That on a regular basis I've been driving back down the A14 from Brecks/Norfolk trips, and on the stretch between the two A11 turn offs, about a mile past the BP service station is a footbridge, and about 200 yards away at most across the adjacent racecourse is a stand of Lizard Orchids. All those trips, and I never knew. 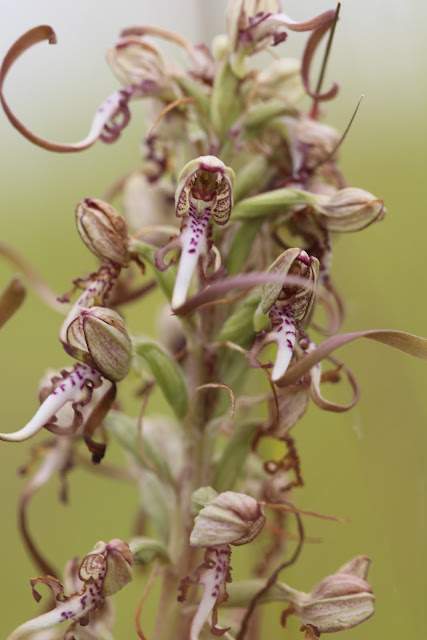 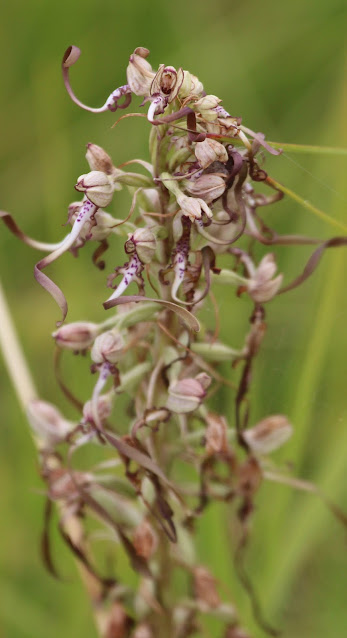