I like to think that if there is one that that makes this a unique birding blog it is the truly awful photography. Despite my best efforts all my photos look like I have taken them through the bathroom window on a foggy day. I have decided it is time to hone my skills and perhaps eventually to become merely adequate. So on a sunny afternoon off I went to Hatfield forest, which despite the photos below looked spectacular. 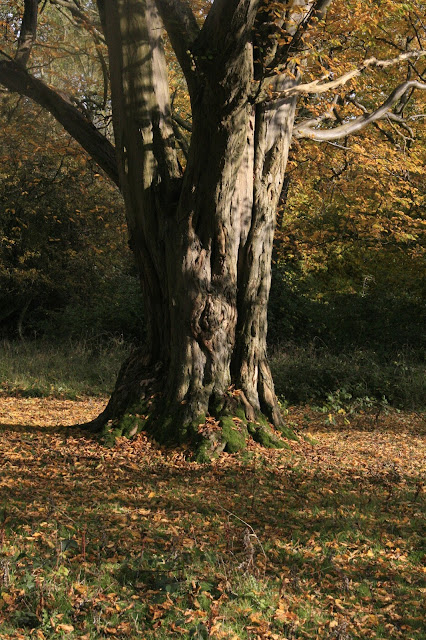 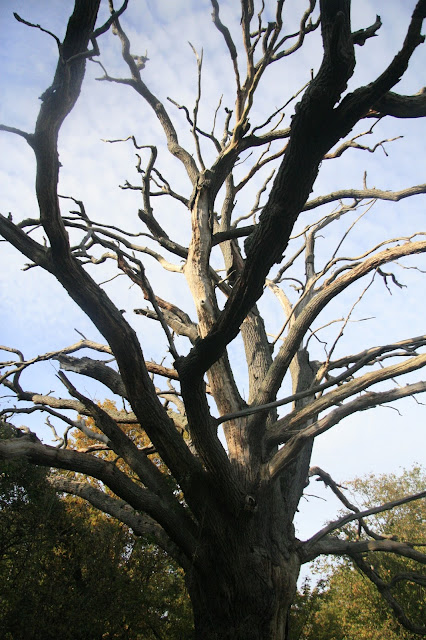 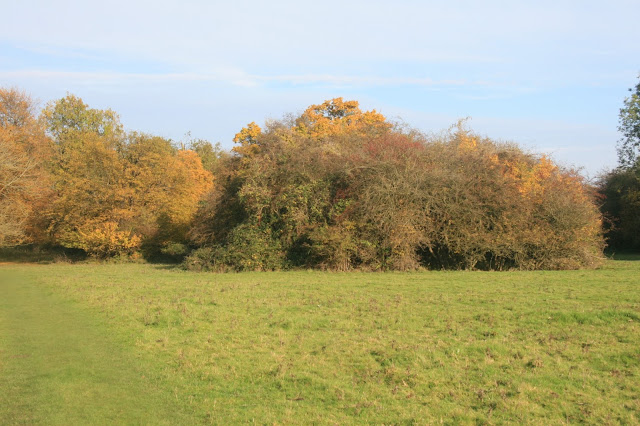 I got lost, and ended up walking a considerable distance. Goldcrests were the commonest birds today by far, other birds were Marsh Tit, Nuthatch, TreeCreeper, Jay, and the usual small stuff.

The Ladybirds had invaded all four doors and grouped together in the seals. Here's the picture from the next morning.

With a fantastic set of birds in North Norfolk and a change of weather looming it was a no-brainer to have a second visit to Holkham Wildlife Park aka Holkham Pines.

I paid my entrance fee at the Queen Anne Drive car park and headed off to the first exhibit - Isabelline Shrike. I spent a half hour watching the bird work the hedgerow, dropping down frequently and once impaling a worm on a thorn. There was one other birder there; as I fiddled with my adapter and camera finally ending up with the horror below as my best effort he calmly clamped his iPhone to his scope eyepiece, stood back and calmly took a video. I think I'm wasting my time with this adapter lark.


He introduced himself as G and we paired up for the day, luckily for me G turned out to be a former twitcher, full of skills and knowledge but relaxed enough to approach this as a fun day out. G was less lucky as he got me. My only material contribution came next as I took us to the bush that had previously held the Red Flanked Bluetail. Last week I had stood in a crowd and had 5 seconds of view; today the pair of us had the bird to ourselves, quietly working its way through the undergrowth, even flitting through the branches above our heads at one point. Blue tail, red flanks, white chin, the lot. fantastic.

We worked the area a bit and G had a Pallas's Warbler stick its head out at one point, but we couldn't refind it, only masses of Goldcrests. On the way back to the car park we found our only group of birders of the morning at our next exhibit, a Firecrest. It gave typical Firecrest views, i.e. a fleeting glimpse of the head and shoulders but nothing else before it dived deep into the middle of a Holly Tree. One of these days I will see an entire Firecrest in full view.

Next we headed toward Wells Wood. Again the groups of birders were our guide; a large group stood under a group of spindly oaks watching a Hume's Leaf Warbler. It was earning its keep today, consistently calling and at intervals perching in the open to allow the crowd to admire its slightly faded look.

Next the Blyths Reed Warbler exhibit. the bird had not been seen for two hours and with only a few people looking for it out prospects were dim. G brought his experience to bear, and also his iPhone. A few "chuck-chuck"s from the bird call app were soon met with a response in kind from deep in the brambles. We then followed the line of gently moving flower heads until we began to see the bird working its way though the undergrowth. Larger than I had expected, it was washed out grey. It gave the characteristic "inverted banana" posture a few times, and was constantly flicking its tail. How to definitively tell it from Reed? No idea, but the affirmation of the crowd is good enough for my list! A smart little bird and thanks to G for finding this lifer.

It was mid afternoon and my permit to birdwatch was due to expire so I left G searching for more birds, in particular a skulking bird with a soft "tack" we had seen flit across our path earlier. The final exhibit was a crowd by the Car Park looking into a holly tree - Pallas's Warbler! Like the Hume's it flicked its way round suitably exposed twigs giving the admiring crowd full value - another outstanding bird. The only thing it could have done to please the crowd more was to sit in the open and sing, which I mention as the last time I saw this species 30 years ago that is what it was doing.

Supporting birds included an obliging and colourful Brambling under some pines, a couple of Chiffchaffs, a pair of Stonechat, a few Common Buzzards and Marsh Harriers, Redwings and Skylarks overhead.

I was left with some intriguing questions. Birders have a choice of visiting the exhibits or finding their own; how long does it take to find your own? Our experience from the Blyths was you could spend all day and not find one. How many other skulkers are there out there? A late Olive-Backed Pipit was reported after I left, and a second Bluetail was found over the weekend, so I suspect there may be quite a few other undiscovered skulkers in the 3-mile stretch of thick woodland. By contrast, I suspect most Shrikes have been found as they sit on the top of bushes out in the open.

Thanks to G for excellent company and expertise. Another smashing day in Norfolk

I had some free time this afternoon, so put on walking boots and waterproof jacket and went out the front door ...

First north along the river from Sawbridgeworth to Thorley Wash. More Blue tits than I can recall along here in several flocks, accompanying birds included a Chiffchaff at Keksey's farm, a Coal tit and a Goldcrest at Wallbury, and a couple of Treecreepers. - always nice A flock of about 25 Siskins at Tednambury gave good views in riverside alders. 5 Redwings over were my first local birds, 5 Little Grebes on the river and plenty of Jays , also the usual list-padders such as Grey Wagtail, Great Spotted and Green Woodpeckers.


Then west up the hill to Thorley Church, and the start of the walk up to the high ground. Lots of open fields now, and footpaths leading me across recently sown winter wheat.There was a Common Buzzard sat in a field, and a flock of c15 skylarks. Up across another field to Trims Green, another small Skylark flock, and a tweeting Chiff in the bushes round the fishing pond.

Now a small wander round the high ground of Shingle Hall Farm down to Tharbies. The Peregrine was sat on its usual clod, ignoring both the flock of Wood Pigeons at the north end of the field, and two Sparrowhawks cruising the eastern perimeter. Down near Tharbies 2  Golden Plovers flew over calling whilst I was inspecting a flock of 50 Starlings. A couple of Yellowhammers called from unseen bushes and 5 Swallows went west in advance of a dark cloud. Finally 7 Red Legged Partridges scurried round the corner of a copse near West road, and that was the end of the walk.

All in about 4 hours hard walking. It's nice to get some of these birds on my walking from the house list, but there was a lot of time with no birds and not much chance of seeing any. Perhaps next time I need to park near the high ground for a proper walk round there, and walk all the way to Stortford and get the train back. 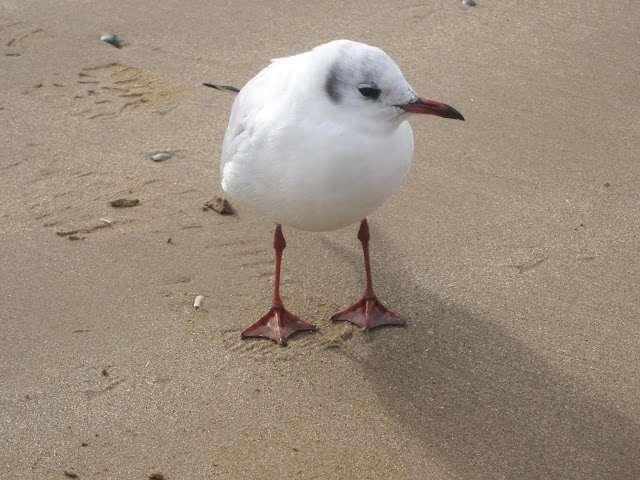 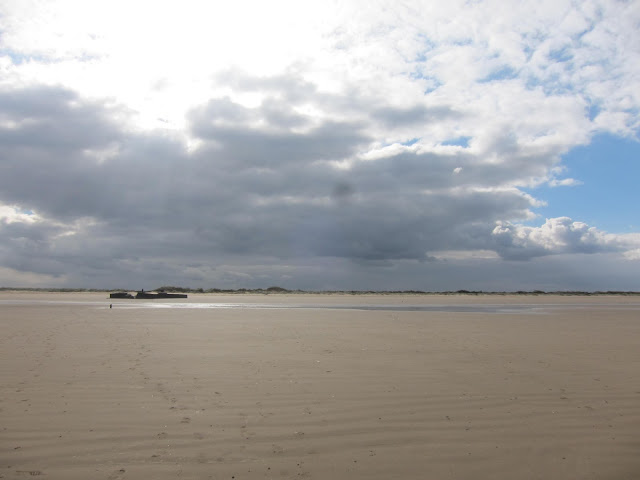