I was out on Chobham Common when we came across a bumble bee with an orange-red tail and a faint white band on the thorax. It was similar to a male Red-Tailed bumble bee, but not with the same as ones I was used to from my patch. so /i took lots of photos, and was going through them at home when I cropped one and got this. 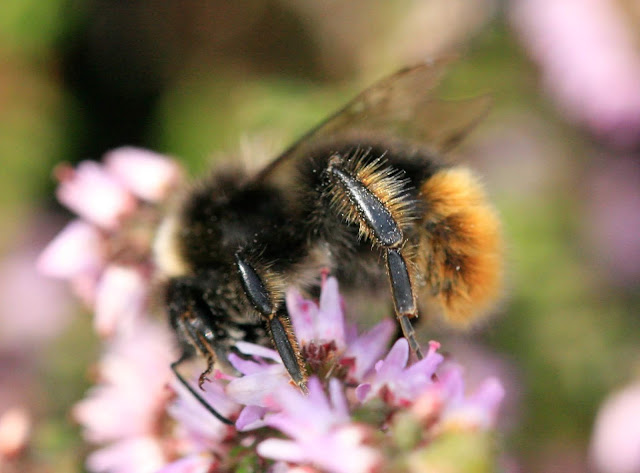 ... and just have a look at the hairs on the leg. Bright orange! clearly this is a Red-Shanked Carder Bee. No need to look any further, so I triumphantly tweet this out, and somewhat arrogantly copy in the wonderful Steven Falk, author of the excellent The Field Guide to the Bees of Great Britain and Ireland. I duly wait the applause, and instead get a tweet back saying this is just a male Red-Tailed Bumble Bee. Surely he must be wrong! So I protest and back comes a polite tweet pointing out that the extra photo I attached shows white on the face, and this is diagnostic of Red-Tailed Bumble bee, and that Red-Tailed Bumble bees have red whiskers on their legs too.

So that is me told. I have clearly not got my Bee eye in yet and am still having basic difficulties understanding the variety of the common bees. Like those people who take pictures of young Blackbirds and think they have something rare. Anyway, I am now wiser, and very grateful for Mr Falk sharing his expertise with people bombarding him with mis-identified photos of common bees, something he does regularly and with patience and charm; we are indeed lucky to have naturalists so generous with their time and expertise. 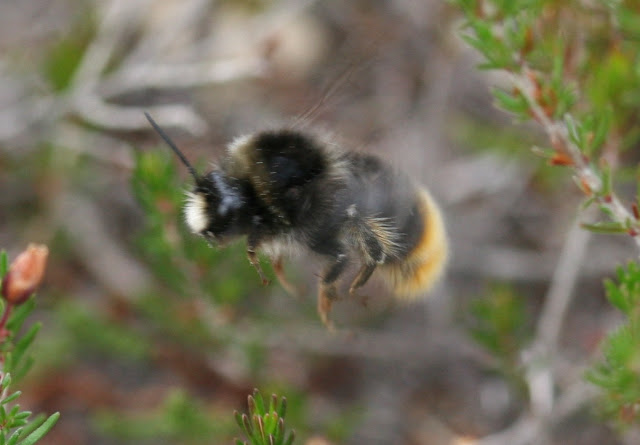 Meanwhile this tweet has embarrassingly got a life of its own. Despite the complete mis-identification, lots of people are now liking this and retweeting it. It has become my most popular tweet. I'm tempted to delete it ...
at August 27, 2018 No comments:

D#3 wanted a lift to and from Thorpe Park. So, a day SW of London. David suggested Chobham Common, and that's where we went. Well, we actually went to Cobham, but soon realised our mistake.

Bird-wise it was quiet; a few glimpses of Dartford Warbler, several Stonechats, and a flock of about 40 birds that had Willow Warblers, Blue, Great, Coal and long-tailed tit, and a Spotted Flycatcher. But we did find Grayling butterflies all over the place, much to our surprise.

This was the first time for me I've seen them close too without a strong wind, so the first time I got to see their upper parts - in flight only. A really nice if unspectacular butterfly. After a while David noticed something about their behaviour, mainly because as we moved to take the best side-on shot our shadows were in danger of impinging on the butterflies. We eventually worked out what we think was going on.

The butterflies land with their fore-wing up revealing the eye, then slide that down, then slowly shuffle round until their wings face the sun, and then lean slightly so their wings are perpendicular to the sun's rays. Then they soak up the maximum heat they can. Quite something!


A few more nameless insects. Possibly Heather Mining bee (really should stop thinking that every dark slim bee is a honey bee), no-idea on the wasp, oh, and a bumble be that deserves a post of its own ... 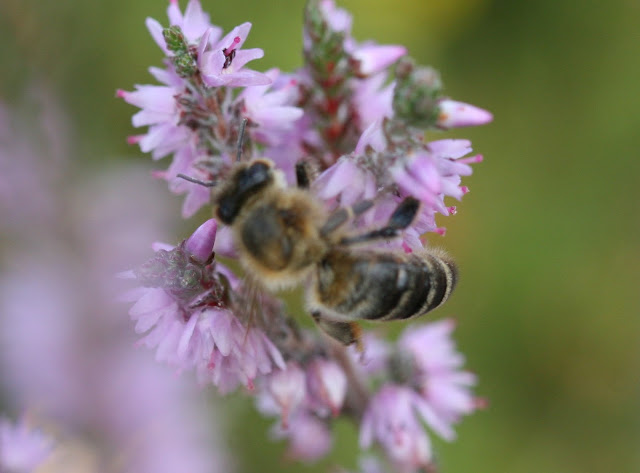 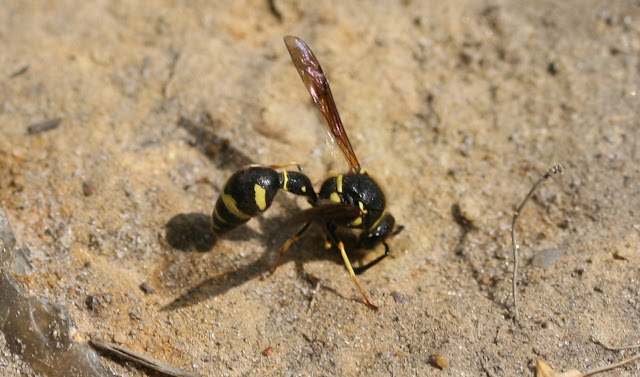 Email ThisBlogThis!Share to TwitterShare to FacebookShare to Pinterest
Labels: Butterflies

Breaking the mid-August doldrums at Minsmere

Mid August can be a difficult time as migration begins in fits and starts. However a Semi-Palmated Sandpiper at Minsmere ticked the automatic "lifer within 100 miles" box so I was on my way, by myself this time as my usual birding companion was not available.

The bird was soon ticked, quelling pre-tick nerves, and I managed to get decent if somewhat distant views (see here for typical views). It showed the various features that my pre-trip reading had indicated were diagnostic - lack of v stripes, short-tailed projection, slightly heavy black bill etc but I fancy if I'd seen that by myself I might have ticked an adult Little Stint. And whilst it is nice to get a lifer, careful steady of this peep only confirmed that a juvenile Little Stint is a beautiful bird in its rich tan and pinkish hues in a way that a semi-p isn't. Roll on September and a few of those for the list!

Otherwise on the scrapes there were 60 Little Gulls - an amazing numbers, 6 Spotted Redshanks, 4 Ruff, 3 Green Sandpipers, 2 Greenshanks, a Little Tern and an early Wigeon.

Another lifer turned up in the form of a Wasp Spider. It was easy to find, having been told to go to the place with the trampled-down grass, and was very impressive - larger than I had imagined.

One of the pleasures of birding is meeting other birders. At the Sluice bushes I got chatting with a chap from the midlands when he noticed a flycatcher-like bird popping up from the bushes there. We gave it a while and eventually he picked up a Pied Flycatcher briefly in the depths of the foliage. It disappeared but returned later to chase off a different bird that suddenly appeared, so at least one and possibly two Pied flys. If I hadn't been chatting to him I would have been long gone I think before this turned up.

So there we have it. Nearly time for migration to really kick-in. Come on winds, please just swing round for us.

Email ThisBlogThis!Share to TwitterShare to FacebookShare to Pinterest
Labels: Minsmere

A day out with David hunting insects, a few weeks later than ideal. In retrospect, with searing heat on Tuesday and drizzle today, Wednesday was a serendipitous choice although when the breeze got up on Thursley it didn't feel like it.

It took a while for the dragons to appear, but when they did they were in number. Lots of Black Darter (new for me), Keeled Skimmer, Black-Tailed Skimmer, Emerald Damselfly, Common/Azure damselfly, Blue-Tailed Damselfly. 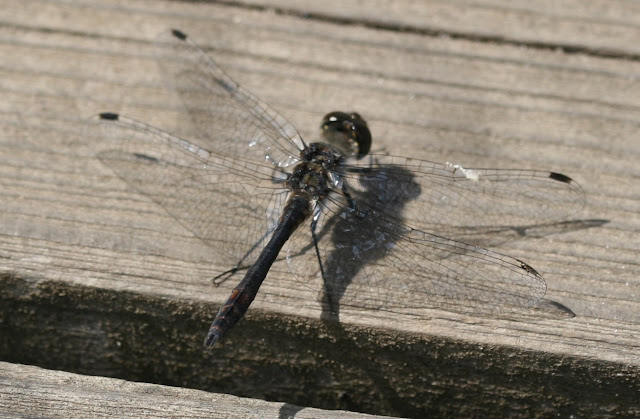 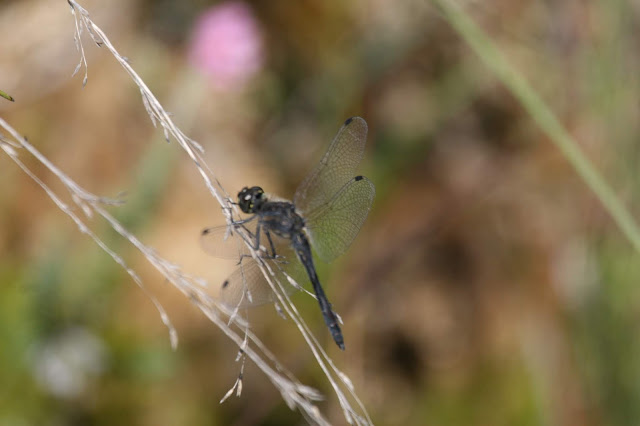 On a couple of occasions we noticed female Keeled Skimmers ovipositing and a male hovering just over; this seems to be a recognised part of their behaviour.

We got lucky with Small Red Damselfly as a couple fluttered briefly whilst we were watching a Black Darter. Wow, they are really small! Very hard to see when not flying as they look like bits of grass. 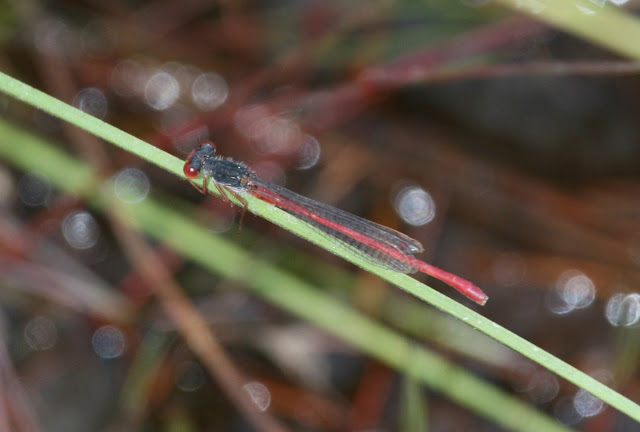 On to Oaken Wood. Not the visual feast of White Admirals we had experienced on our previous visit,  still lots to go at.

We saw a Blue which was so small, wings literally the size of a little-finger nail, we were left stumped as to what it is. Reviewing the photos, I think it is just a very small Common Blue. Perhaps the drought has resulted in smaller butterflies in the second brood? 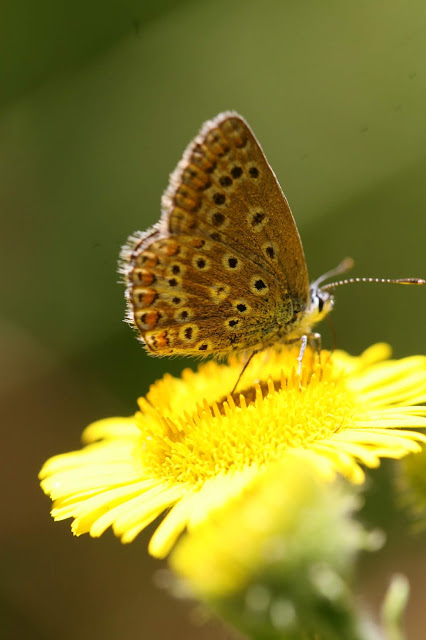 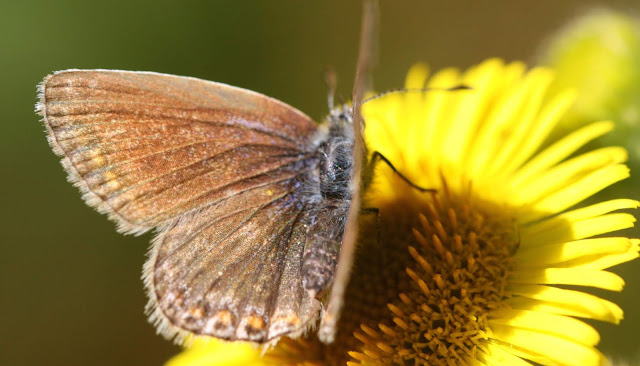 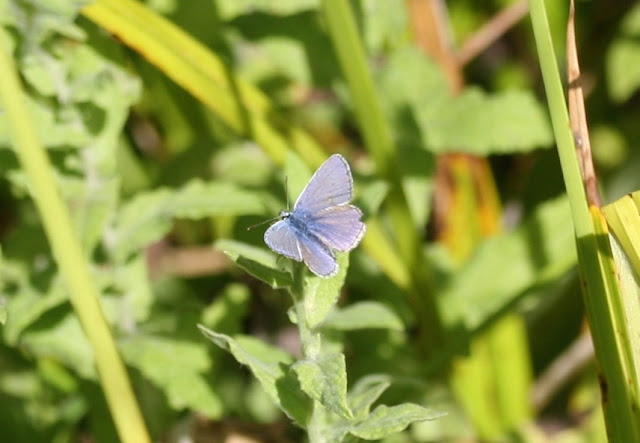 The star butterfly was undoubtedly the Wood White, of which we saw six. David picked out the first (and most of the others), males just permanently flying a couple of feet off the ground. Such a small and dainty butterfly with those tear-drop wings! Photographing these on a plant was obviously impossible so I was reduced to trailing around trying to get a flight shot. The one below is the best of the bunch and shows the pale spot on the upper fore-wing. 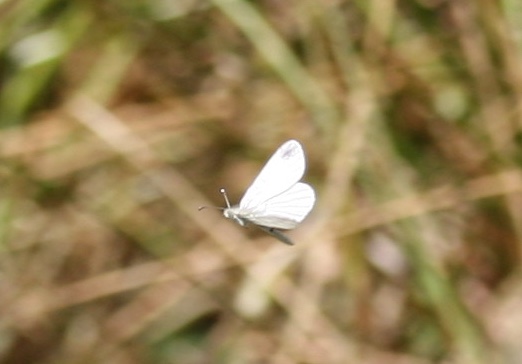 David found a (presumably) female settled on a thistle and quietly fed, so an opportunity to get the macro lens doing the job it was designed for. 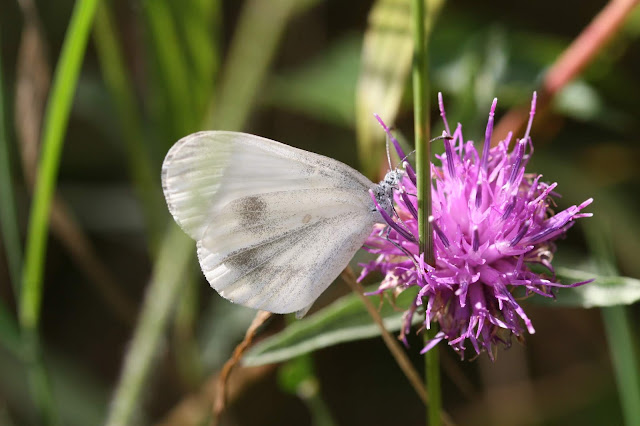 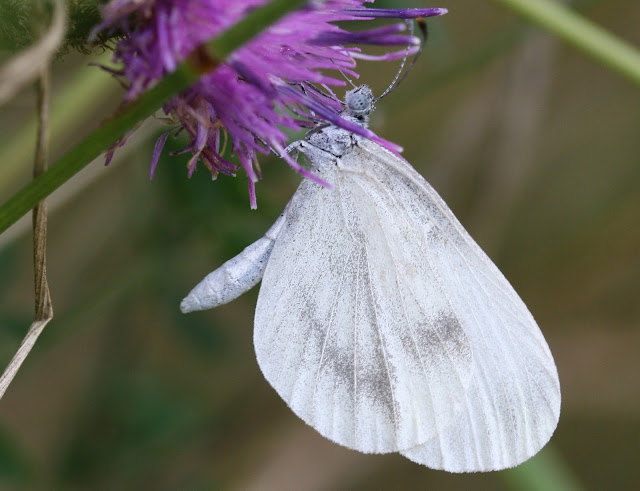 There is something very therapeutic about looking for insects. You are in their hands, and if they decide not to appear, that is something you just have to accept. In contrast to some aspects of birding, the slow pace and careful looking required for looking for insects is quite calming. I guess its almost over for this year but am looking forward to next year already.
at August 09, 2018 1 comment:

Dipping reached new heights at Rye Meads this morning. Not only were there no birds to be seen, but I missed the Willow Emeralds and Wasp Spider, despite there now being a big sign saying "Wasp Spiders are right here!" Nevertheless, got into pleasant conversation with a fellow birder and saw a few insects so a worthwhile and enjoyable outing. The best of the photos here. 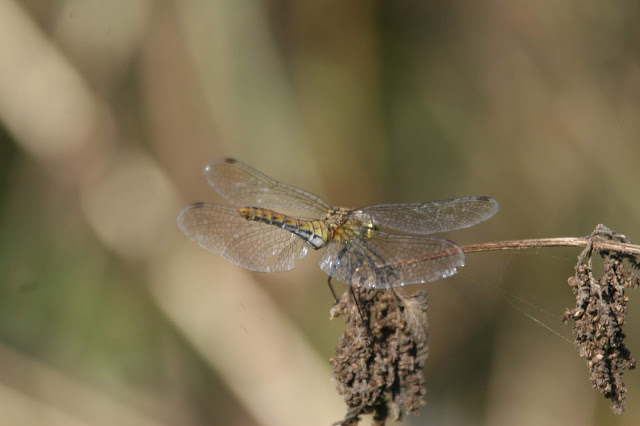