Out with camera in search of crime.

What’s crime been like in your area recently? Round south Sawbridgeworth its been rife. Murder, theft, gangs mugging individuals. Twice I've heard general consternation and found a Sparrowhawk sat on a bird, and twice my appearance has caused the hawk to flee empty handed.

I went out this evening with a camera to try and catch some of the miscreants. Some proper action of proper birds, not just some lazy pathetic photo of a Wood Pigeon sat in a tree. Even I have to be better than that.

Two days ago at the flooded field I arrived in time to see the four Lapwings flying round in an agitated way, mobbing a Carrion Crow. The Crow flew off with an egg in its mouth. I assume it belonged to a Lapwing. Also flying round were a couple of these, who have been hanging around and who I believe were in some way involved in this crime. 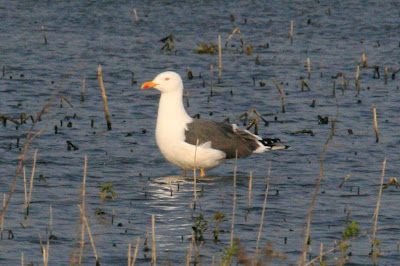 The Lapwings have been wandering round the fringes of the pond, looking spectacular with their bright red legs and multi-chromatic wings, but at the same time somehow forlorn. 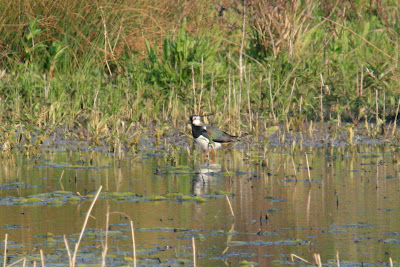 And if its good enough for Lapwing to graze round here, and also a Common Snipe recently, then why not something else like a Wood Sandpiper, or a Spotted Redshank? Its not asking much is it?

At least one bird has managed to get some young off. 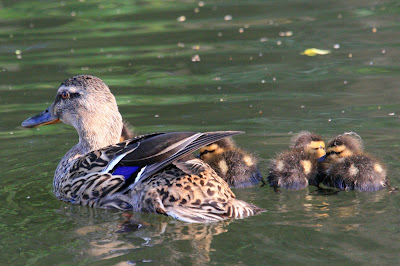 I continued up toward the wood, hoping for one of the local warblers; a Lesser Whitethroat, one of the local Grasshopper Warblers, or even just a Sedge Warbler or Linnet from the overgrown field. Instead I get a pair of Bullfinch. I haven’t sent these for a while, and there perched in an adjacent bush is the pair. Possibly a unique chance to get the two of them together, and here they are! 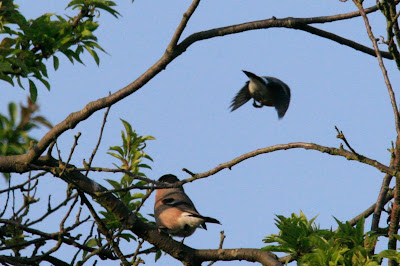 Then the regular Grey Heron doing its daily flight over the Park. Surely I can’t screw up this one! 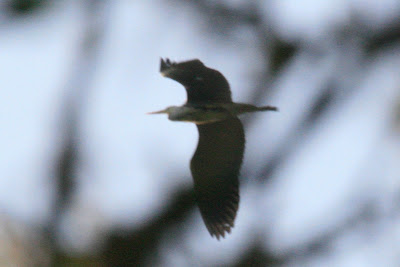 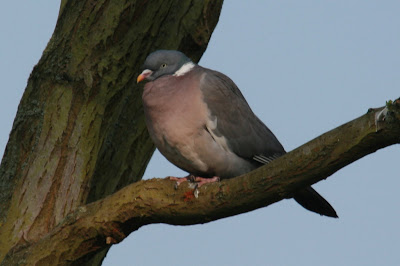 The countryside of Britain is covered in fields. Pastures, grazed by cattle or sheep, with a low uniform sward of grass, or arable fields with dense monocultures of alien crops. As we all know, pasture doesn’t generally support much bird life. A few thrushes, some pigeons and crows, and if we are lucky an occasionally Lapwing, or wagtail.

Have you ever wondered what would happen if a field was just left to revert to some kind of original state? What birdlife or other wildlife it would support? Well courtesy of the field neighbouring the road at the bottom of the house, I can give an answer.

The meadow borders a stream on its north edge, and then rises towards a wood. There’s a small rough wood on the eastern edge, and another field on the southern edge. There are unkempt hedgerows all around. The ground is not particularly wet for the most part but there are rushes along the stream.

I have no idea when it stopped being farmed, but a couple of years ago it had some waist high thorn bushes and a pair of Linnets. This year the field is thick with brambles and thorn bushes, and a number of trees are dotted round the field. Many plants are now over head height, and the eastern half is just about impenetrable. The pictures show this clearly. 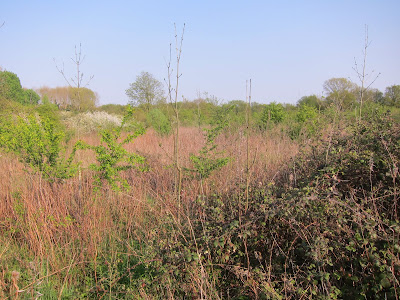 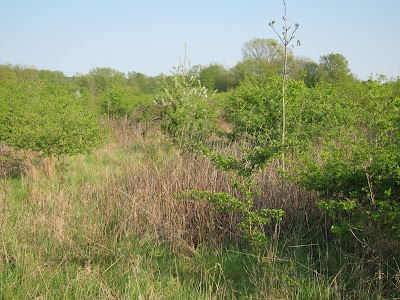 So far this spring the birdlife has been spectacular. There are numerous Linnets, Goldfinches, Greenfinches, and Chaffinches and a Reed Bunting has been seen and heard occasionally. There have been records of Chiffchaff, Willow Warbler, Blackcap, Garden Warbler, Whitethroat, Lesser Whitethroat, and recently even a reeling Grasshopper Warbler. With all this birdlife a Sparrowhawk is regular chasing birds along the edges. And I’m no expert on butterflies but currently there are numerous Orange Tip, Small Tortoiseshell, Peacock, and Speckled Wood butterflies.

Portland Bill this morning. I was convinced it would be epic - southerly wind, rain on its way. And it was - epically barren. Skylark, Meadow Pipit, Pied Wagtail, Linnet on the land. Gannet, Kittiwake, Fulmar, Razorbill, Guillemot, and Shag on the water. I retreated to the obs, and commented on the lack of birds.

"It's not Skua hour." The theory, as relayed to me by one of the regulars, is that the Skuas spend the night in the western approaches, and leave at dawn. this brings them past the bill between 8:45 and 9:45 am. Needless to say, the theory was met with mirth and derision from other regulars, who no doubt had heard it all before.

Email ThisBlogThis!Share to TwitterShare to FacebookShare to Pinterest
Labels: Portland

Took the dogs for their daily constitutional round Pishiobury Park. The park has had a lot of work on it recently - am I a cynic to suspect budgets being spent up just prior to the financial year end? 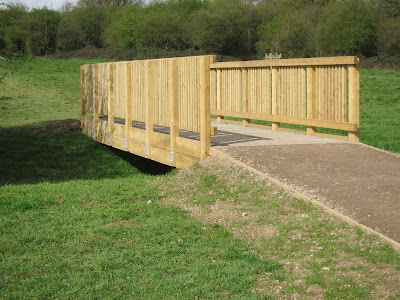 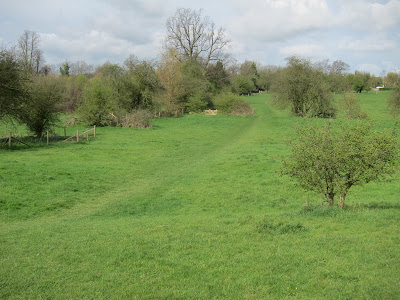 The Park is wide open green space dotted with mature trees. There is a hedgerow through the middle, and some overgrown wooded areas round the fringes. Birds are much as you'd expect - ie not very many. But there are open views so occasional birds do fly over, including a couple of Wigeon during the December freeze up and a Ring-Necked Parakeet earlier this year.

The Horse Chestnut trees are coming into leaf. These trees nationally seem to be under a rage attacks from a variety of sources, There are a number of excellent specimens, so fingers crossed they survive the current onslaught of "all Horse Chestnuts must die" disease. 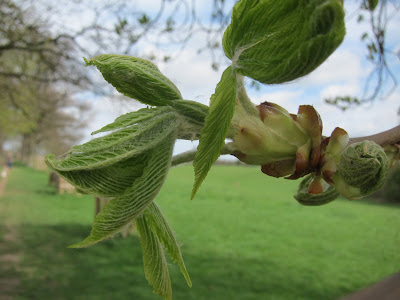 Today there was a distant Common Buzzard, singing ChiffChaffs and Blackcaps, and the usual Great Tit and Blue Tit. Some day soon I'll do a proper survey and count to provide a baseline population.

Mrs D and I spent a few moments sat on another new installation - a seat specially designed for those members of the local population who are over seven foot tall. We clambered up and sat there swinging our legs. Money well spent. 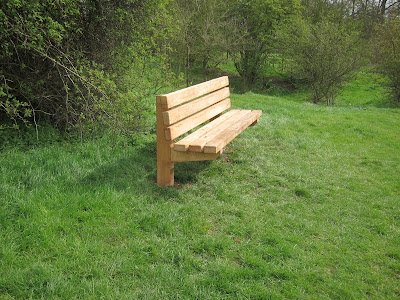 Email ThisBlogThis!Share to TwitterShare to FacebookShare to Pinterest
Labels: Pishiobury

The pond at Lower Sheering is fuller than its ever been. Today it was host to a pair of Shoveler, a pair of Gadwall, and a few Teal. Recently its held a male Pintail, had a female Wigeon for a day, and a pair of Shelduck were reported from there too.

The Park held four Common Buzzards again, and plentiful singing Chiffchaffs and Blackcaps. There were several Brimstone butterflies on the wing ("Cabbage Yellows" according to Mrs D), and a Comma and a Peacock butterfly.

There are still small flocks of Yellowhammer, Chaffinch, and Fieldfare around, but the Siskins that were here in number early in the winter have all departed.

The High ground held 35 Golden Plover this evening, looking spectacular in summer plumage as they wheeled over the field. Previously this flock was up to 250 birds, and a male Wheatear was here last weekend too
at April 02, 2011 No comments: