My first visit to The Naze to see some Yellow Browed Warblers. It took me a while to get a feel for the place, and for some time I found myself looking at banks of empty bushes, or glimpsing goldcrests, chiffchaffs, long-tailed tits and blue tits. I thought I'd go away empty handed, but fortunately the locals were helpful, patient, and generous in their assistance. I finally got a brief glimpse of a YBW at the top of a sycamore, and a Firecrest peeped out of the middle of a bush.

I got to considering the time I'd spent doing the various things I'd come to do, and constructed a pie chart. Here it is.

The YBW is there at 0% and the Firecrest doesn't even register. It would seem on the face of it that this is a poor return, but birding is nothing if not about travelling hopefully, and the search through flocks of flitting waifs in the hope for the eventual jewel was fun. I'd go again if the opportunity arose.
at September 29, 2015 3 comments:

I went back to the high ground to look for the Peregrine that had been three a couple of weeks ago. I had been back briefly mid-week and seen a Wheatear but not much else, but had a window of opportunity today to revisit. After a few blanks, a strange avian arguing revealed the presence of not one but two peregrines over the airfield memorial. The tussling continued for a while until the clearly larger one (presumably the female) drifted away over the Stort valley... the male cruised around victorious for a while before swooping down to its favourite clod in the centre of the field.

This time I was armed with my new camera adapter. It's nearly great, in that it nearly fits. With a bit of fiddling I can get a picture that fills the screen on the back of the camera, with the result below. It was a long way off blah blah and there was heat haze blah blah and the light meant I couldn't see the back of the camera properly but there it is, a Peregrine in a field. 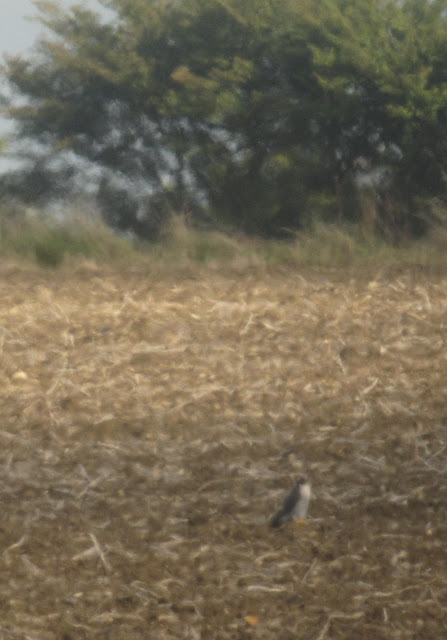 Some days stick in your mind. 23rd August 1986 was one such for me. I was wandering round my then home north of Leeds and took an unfamiliar route back to Bramhope via Lineham Farm. This is rough farmland right on the top of the escarpment that sits on the south-side of the Wharfe valley, and to the west becomes Otley Chevin and then Ilkley Moor. Long story short: 15 Whinchat, 6 Wheatear, 1 Redstart, 2 Tree Pipits. Birds I had never expected to see in those numbers so close to my home.

I went back on a couple of occasions that year and had more Whinchats and Wheatears. I moved out of the area but returned nearby in the early 90's and revisited a few times in early September and had regular Redstarts and Whinchats. My notes also show Yellow Wagtail, and resident Grey Partridge and Little Owl.

The decades have passed, life has moved on, but last week (9th) I found myself back in Bramhope with time to spare, so I headed out again down Breary Lane East and out to Lineham farm. How would it compare?

Firstly, its a shock to see the things you took for normal. The hawthorn hedges were windblown affairs; sparse, gnarled, twisted and stunted, not the lush and vibrant hedgerows down here in Hertfordshire. The fields were rammed with scores of sheep apparently being held for a few days prior to being taken to market. There had been crops grown in the area, but now it was just rough pasture and much of it looked as if it had been left to go wild and thistle-covered. And the views were fantastic, across Lower Wharfedale and up the Washburn Valley.

The first change in the birdlife was predictable: Red Kite. Not a single distant red kite, but four red kites in view at once, more behind me, one crouched in a field like a white-haired old lady with a grey shawl, and one just over my head. What an awesome change, and one worth jumping up and down about. The second change was Common Buzzard. 2 birds, sat in bushes so not just drifting over. this was a scarce bird back in the 80's in these parts, but like much of the rest of Eastern England they are now well established. Then c35 Lapwings in a field with 200 Starlings (not recorded in my old notes but were typically in the area), c150 Goldfinches and sat quietly amongst them 3 Siskin, also noted a Sparrowhawk, c20 Pied Wagtails, c20 Swallows, and a few Common Gulls - again a common bird in Yorkshire.

So on this occasion no migrants (other than Willow Chiffs calling distantly), no Grey Partridge, no Little Owl. That doesn't mean they aren't here, but the area has changed and I would not be surprised if the Partridge at least had gone.

A gap in the afternoon. Wryneck at Stevenage? too far, particularly as I don't know the site and they tend to go missing for hours at a time. Osprey at Panshanger Park? Nearer, but Ospreys spend most of their time sat in trees, so unless you know the tree ...

So into the van with the optics, and drive slowly through the village and up onto the high ground at Trim's Green. Two miles in all as the Osprey flies. My first stop is a lay-by next to a large field, and it is empty until I find a Peregrine sat on a large clod of earth. Zoom up, and its a fine adult, barred chest, yellow claws and saddle on the beak, black hood, yellow eyering, deep blue back. I spend about half an hour watching it, and it just sits watching. Its head goes round the full 180 as it surveys the field, fully aware I'm sure of the woodies in the distant corners. It looks straight up, and keeps looking up. I follow its gaze and see a Red Kite drifting over. The kite drifts over the top field and is lost to view. The Peregrine keeps sitting on its clod of earth.

I move on to the entrance to the farm. From here there is a clear view over toward Stansted airport and Hatfield Forest. a few gulls moving, then some panicky wood pigeons and the peregrine is flying through them. It isn't really trying and at one stage a pigeon chases it. It twists and turns, tucks its wings in for a mini-stoop, and then cruises round for a while and drifts off.

On to stop three opposite Mathams Wood. Nothing but crows, jackdaws and pigeons, and about 20 or so Swallows and House Martins, which may be local, feeding over the recently cut fields. Just getting back in the van when some discordant crows alert me to a Common Buzzard drifting just over the car and then over the field. I know these are common birds now, but close up and low these are still mightily impressive birds, full of power. This one has pale feather edges on its upper wing, so probably this year's bird.

Last stop, a gate at the west edge of the big field, from where the concrete ribbon perimeter of the old airfield winds across the field. Again, it is empty until I find a Peregrine, presumably the same one, sat in the field. A passing pigeon draws it out and it menaces the pigeon on its way, not really engaging. Even so it covers the field in no time, and gives a few more glimpses of its speed and power as it flies up and round back toward the field where I first found it.

One last traverse with the scope of the hedge in the middle where the earth mounds are. A very blotchy common buzzard is sat there. Then that's it for the day and off for some last-minute shopping for D#3's birthday tomorrow.

Its only September, but if this peregrine hangs around we could have some fun this winter.