Brrr - an extra layer today. I'm told that local beekeepers are feeding their bees on syrup to stop them consuming the honey as they have stopped going out. Just one butterfly today, in contrast to a couple of weeks ago when they were seemingly ever-present. Showery and windy kept many birds well hidden, and for the end of April there are still some noticeable absences - Garden Warbler, Cuckoo, for instance.

The sky was the highlight on today's walk round the patch. Some real drama as the showers headed past, massive grey clouds and sun shining in the gaps 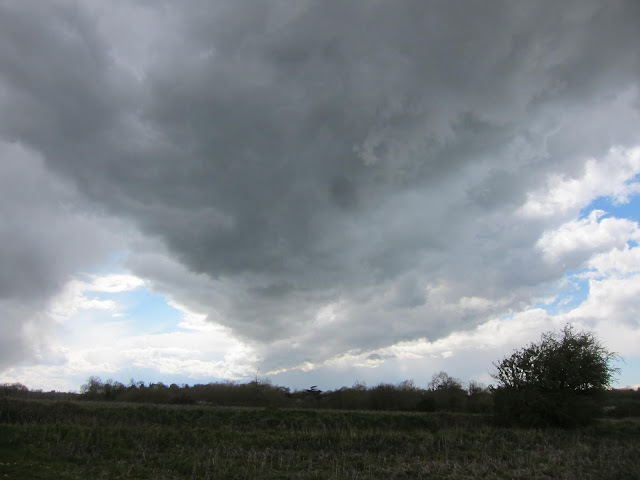 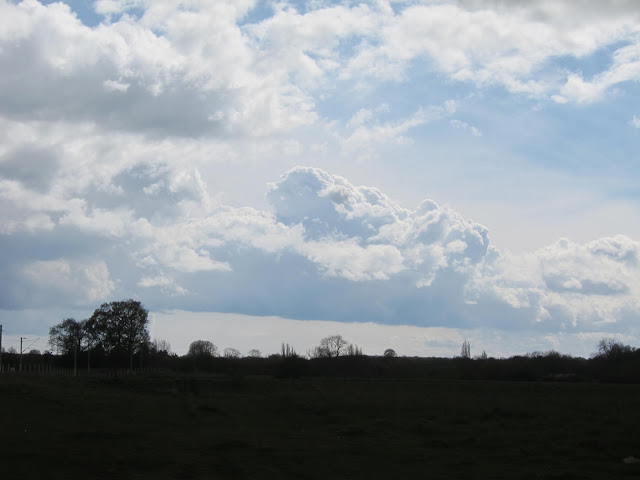 Warbler numbers are beginning to build up. They have been variable recently with some Chiff passage along the river recently. Today a Willow Warbler singing from the usual location, which is somewhere in the impenetrable centre of the overgrown field, and 3 singing Chiffchaffs. Lesser Whitethroats are almost the commonest warbler with 5 singing recently. Today a Cetti's Warbler from below Feakes Lock, a Sedge Warbler singing at the pond, and 3 Whitethroats.

8 Swallows over the pond were joined by 2 House Martins which became the 77th species on the patch this year.

Finally the Little Owl was found again. Everyone else gets a Little Owl sat out on a stump or the corner of a building, so why do I get one that sits in the middle of a bush? And hides behind a lichen-covered twig to boot. 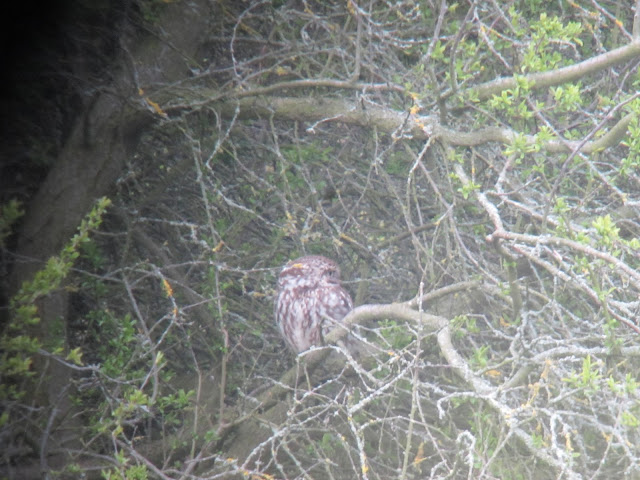 It was never going to be as good as Sunday. Nevertheless, some observations worth recording.

First to Ferrybridge at 7:30ish. Nothing much on the water (8 Oystercatcher and a few Sandwich Terns) so I climbed up the shingle to join local watcher S. He effortlessly picked out 10 Common Scoter and a Fulmar out on the sea. Portland Harbour was millpond-flat, and we picked up 2 Great Northern Divers, another Common Scoter, and in the far corner a Black Throated Diver. Even at this distance it had that snake-like appearance, and was clearly still in winter plumage.

S pointed out some hares and a pair of Ravens further up Chesil beach. The Ravens indulged in a spot of pecking; one bird stood motionless, and the other gently pecked round the first bird's head, presumably taking nits or ticks. we've all seen chimpanzees do it, I haven't heard of birds doing this before though.

On to Portland. It was quiet, but birds started to come through; male Redstart, Whitethroat, Stonechat, a few Willow chiffs. A peregrine appeared twice, once taking a small bird and sliding off over the cliffs. Peregrine was the commonest raptor of the weekend in terms of views.

Finally Lodmoor in search of a Wood Sandpiper.  The water level was high, and there was some wader activity on a pool in the centre; a summer plumage Black Tailed Godwit, and something that could have been the target bird flew in but was out of sight when it landed. Oh well. There was still enough to see - 2 Marsh Harrier, a Wheatear, a White Wagtail, 2 Lesser Whitethroats including one singing out in the open, Cettis close enough to touch. A nice way to finish the weekend. 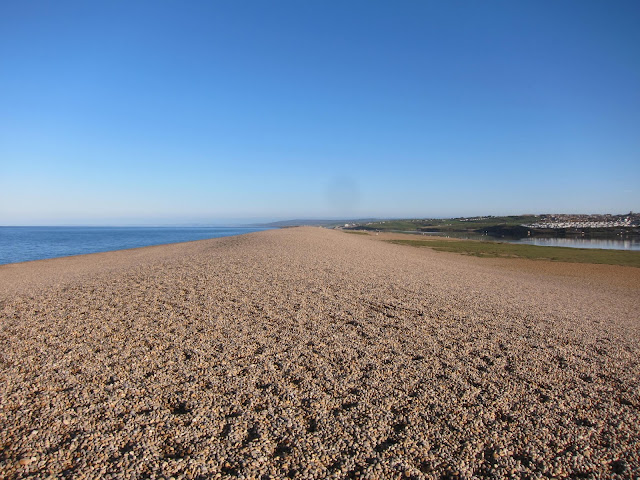 The sky was clear blue all the way down to Portland. Whilst undoubtedly making for a beautiful day walking the island, a clear night is usually the signal for migrants to depart. Would there be any migrants left? Would new ones arrive?

Male Ring Ouzel on the slopes near the neolithic site was a promising start. Then down to the Bill car park and Swallows were in off the sea in a constant stream. Probably low hundreds during the day, with a House Martin and 5 Sand Martins. There was a Wheatear near the bill - the first of 12 during the day and a hint of things to come. The sea was largely void as expected, with some Guillemots lounging near the cliffs. I thought a distant large brown bird was my first skua of the year, but no it was a Creamcrown Marsh Harrier making its way to landfall somewhere along Chesil beach.

Up the west cliffs to the Top Fields. A male Redstart was the first of 4 seen during the day, and a White Wagtail was present, identification of this presenting no problem now I am an expert (see previous post). On to the top fields proper, and more Wheatears, another Redstart, 3 White Wagtails on a strip of freshly ploughed field, and two Short-Eared Owls in a bush showing fantastically well. A Peregrine zipped around amongst some Buzzards and a Raven. the first of a number of views of Peregrine as they hunted over the bill area presumably looking to feed the growing chicks somewhere down the West Cliffs.

A lift to the Hump - thanks - where there were Blackcaps and a female Redstart (carefully studied for future reference) then a Hoopoe in Suckthumb Quarry. A fantastic bird, quite close, looking almost prehistoric with its crest. It picked out a few grubs then sat quietly under a bush. I called a Whinchat on a bush, but it was a smart male Wheatear, joining my small but rapidly expanding list of Birds That Sit In Bushes For No Other Purpose Than To Confuse Me. Thanks

At this point someone mentioned the Subalpine Warbler was showing well down by the huts, and Tick Fever kicked in strongly. I set a fierce pace, ignoring all possible migrants and arrived at a large crowd surrounding some low vegetation near the huts. Showing regularly round the fringes according to a departing birder. Two hours of watching several Willow Chiffs flitting around followed until the target bird flew in to give tantalisingly brief views. It showed once later for slightly longer. A really neat little bird, the back surprisingly olive-grey I felt, vivid purple face and breast. Some Mediterranean magic for our cold island.

Off to the Privet Hedge to spend a couple of hours not seeing the Bluethroat, with just Wheatear, Redstart, and a very close male Sparrowhawk as reward, but even this dip could not take the gloss off a fantastic day. Finally a Little Owl in the jobs quarry to finish.

Great weather, great scenery, great birds, good chat with other birders. The kind of day that you wish you could repeat over and over, step for step, bird for bird. Fantastic.

Email ThisBlogThis!Share to TwitterShare to FacebookShare to Pinterest
Labels: Portland

Another walk round the patch to see if any migrants had made their way to my few fields.

First up was a Lesser Whitethroat singing in a bush. Quite common locally, it was nice to see one this early belting out its song as it picked its way through blackthorn blossom. then down on the river a Kingfisher whizzed by and a Jay shrieked. On to the horse field, and a Pied Wagtail. I haven't had one on the ground on the patch so was pleased to get this, but on close inspection and note-taking and after consulting books and the net it was a White Wagtail. Pale grey back, abrupt change into the black cap, distinct and bold black bib, not much other black on it.

A Mute Swan on the river was a patch year tick, then down by Feakes Lock a female Black Redstart! It was sat in a tree, and then hawked insects and moved to the bushes by the river bank, finally sitting on a fallen log.

I initially identified this as a Redstart, but sent the photos below to local birders who confirmed it as Black Redstart. I never thought I'd see one in a tree in a field outside Sawbridgeworth! Here's the pics, one enlarged and one as taken through the scope. 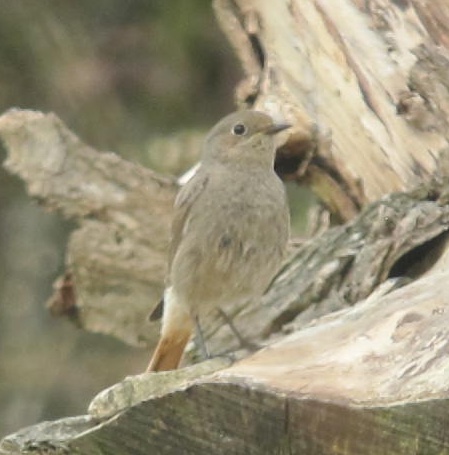 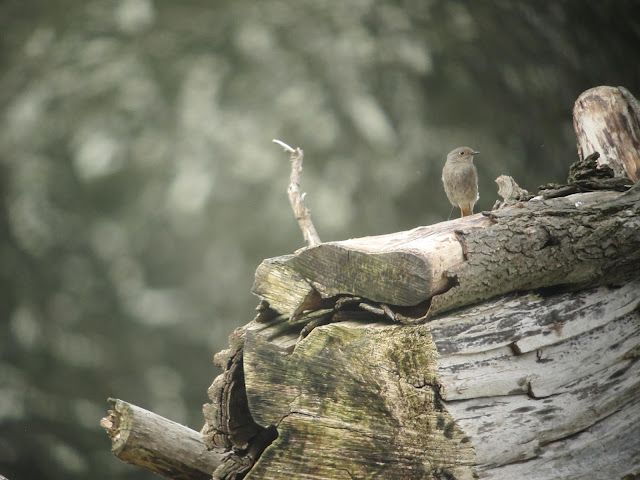 A Cetti's warbler sang from the reeds behind the Black Redstart. That's a different set of reeds from the ones up by the pond, so I make that 2 Cetti's warblers on the patch. A Bullfinch sat in the hedgerow, and a Redpoll was amongst 25 Linnets. Then the rain came, and that was it. After the latest flurry of migrants, the patch year list stands at 72.
at April 12, 2016 No comments:

Twitter broadcast a Little Gull at Amwell. I'd just arrived to observe it when a Marsh Harrier was called flying high over. The cream crown did a leisurely circuit then moved on toward Rye Meads. Meanwhile the adult Little Gull dropped into the Reeds by the viewpoint, before doing some fishing then flying off high south.

Other birds were the first House Martin of the year for me, Swallow, Sparrowhawk, Redshank, Snipe, Little Egret. 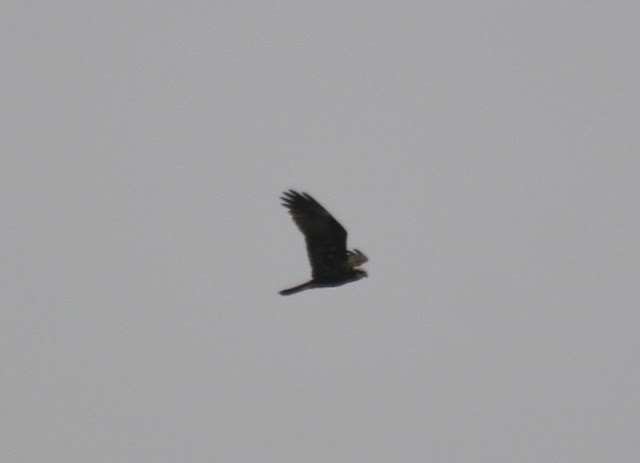 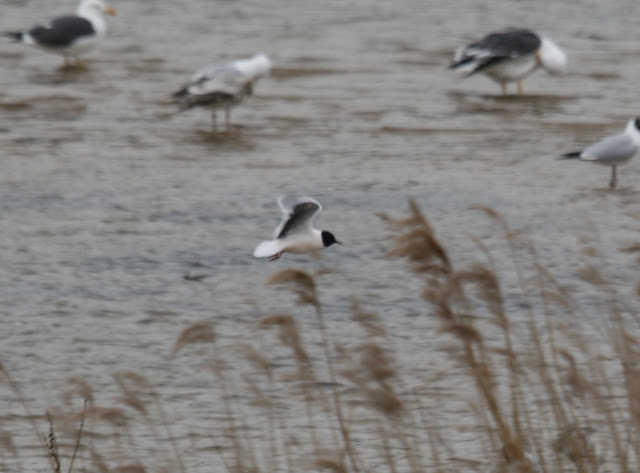 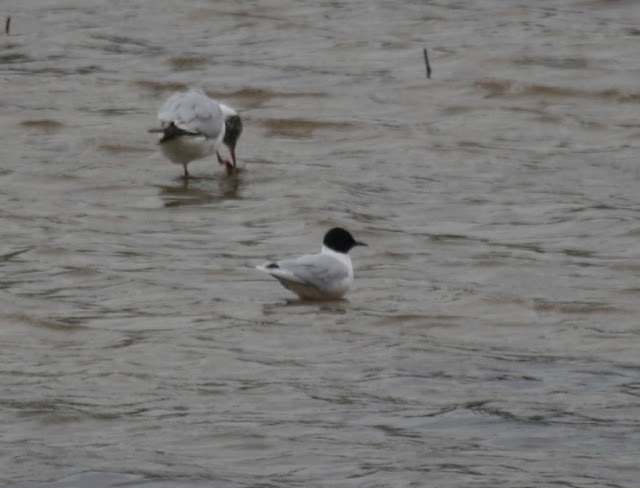 Took the Canon EOS30D with 100-400mm lens with the non-functioning auto focus out along the patch. Here it is, with no editing. Apart from Cropping. And one where I turned the light up.

My patch is some wildlife-friendly fields by a river, with overgrown hedgerows, some tall trees, and crops left in the field. I've frequently walked the patch thinking surely, surely, there must be a Little Owl here. And back in 2007 I did hear one at dusk, but since then ... nothing.

Until today! Boing, boing, in bounding flight across the field like a weird mechanical toy, flew a Little Owl. It perched in a small tree giving excellent views for about ten minutes before I moved on. Where has this thing been hiding? Have I just been overlooking it? I think not, as on the return part of my walk I found it again in a tree, quite easy to see on a scan, so maybe its just moved in. Welcome!

Elsewhere the pond is slowly turning into a mini Minsmere. Water Rail and Cetti's Warbler were heard here last month, and today a Kingfisher of all things sat in a bush looking for prey. There were 7 Shoveler, 2 Gadwall, and 4 Teal, and a pair of Coots are now nesting. No sign of the Little Grebes that have been seen here on occasion, but there was a Grey Heron in the reeds.

On the Herts side of the river there is a distant field with a dip that has become flooded. It needs a telescope to see properly, and no doubt will become dry and overgrown, but today there was a Green Sandpiper, a Shoveler, a Gadwall and a few each of Teal and Moorhen. Last month this held a male Wigeon for a day too.

Elsewhere on the walk a few lingering Linnet, four singing Chiffchaffs, 2 Redwing, 2 Meadow Pipits, and a male Kestrel.
at April 04, 2016 No comments: