Bank holiday with the family and Dog.

Sunday D#2 had avoided going out all day so I persuaded him to go to Lodmoor:

Then Monday morning at the Nothe 2 Willow Warblers and a Wheatear. Sparrowhawk over the marina.

On the way back from Weymouth D2 managed a photo of a rainbow. You can just make out the second rainbow with reversed colours and the slightly darker band between the two rainbows known as Alexander's bands. 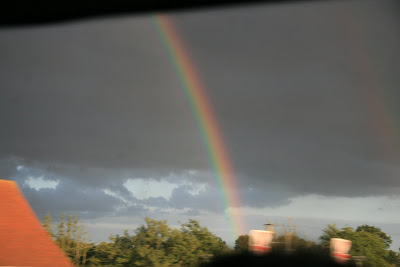 Most of my birding I do by myself, so I’m constantly confronted by the limits of my own ID skills, particularly in Autumn when there’s a mix of plumages. I can’t seem to summon up the certainty of many other birders.

At the Common Tern colony at Lodmoor for instance, where there’s been Arctic Terns and a Roseate Tern recently, I was struggling. I’d only seen Roseate once before and had it pointed out to me in flight; would I be able to identify one sat in front of me without help?

The first visit drew a blank, just a mix of juvenile and adult plumages. On the second visit I found a juvenile with an all-black bill and an absence of the ginger shawl the juvenile Commons have, but otherwise apparently identical to the surrounding Commons. Was this the Arctic? Or perhaps the Roseate losing its summer plumage? I toured the reserve seeing little of interest and ended up at the bandstand looking over the tern colony again. All the terns went up and suddenly there, gleaming almost white, was the Roseate Tern. It settled on its own and was obviously different; easy to pick out with the naked eye; a black bill with a few splashes of red at the base, pale back and wings, bright red legs, and as I zoomed up was there even a splash of pink on the breast?

It seemed bored. All around were Common Terns engaged in a whirl of social interactions; squabbling juveniles, loafing adults, males offering fish to females, females refusing them because the female next door had been offered a bigger one. The Rosy seemed uncomfortable to be in such company, and eventually flew off. The wing-beats were faster than the Common Terns, so I should have no problems picking up a Rosy amongst Commons as they fly past the bill next spring.

The ID difficulties continued when I returned to work today. The Thames has a number of Black-headed Gulls on my patch by HMS Belfast, and they constantly deceive at this time of year. I’m forever spotting Little Gulls and Med Guls, but they always end up being bleached or moulting BHG’s. But today a Little Gull just wouldn’t turn into a BHG. The flying was consistently faster, and when it turned it seemed to flash some dark underwings. A clear-cut case one would think, but without binoculars it’s just so hard to be completely satisfied.

It seems I’m not the only one to have difficulty with ID’s. A Little Stint turned up at Lodmoor whilst we were in Weymouth. I decided not to go and drag the family round Lodmoor again, hence missing the opportunity to fail to spot that it was in fact this.
at August 05, 2010 No comments: