The King of Finches

Out again on the patch today. Added Coal Tit to the patch list. Checked through the finch flock again with similar result to the last trip: 2 Lesser Redpoll, 2 Bullfinch, then low tens of Goldfinch, Linnet and Chaffinch. Slightly further over there were 3 Reed Buntings and low tens of Yellowhammers.

Finches are amongst the most glorious of birds. Brambling provide a variety of spectacular plumages, and Hawfinches are favourites of many birders although that is partly down to their scarcity. But for me the King of Finches is the Bullfinch. On a cold winter day a plump male is a truly spectacular sight; the colours are outrageously vivid - an ostentatious challenge to the notion that birds should be difficult to spot for their own safety.

At this point I should show a photo such as this one.  But I had my scope and contraption to day, so you get the picture below instead. 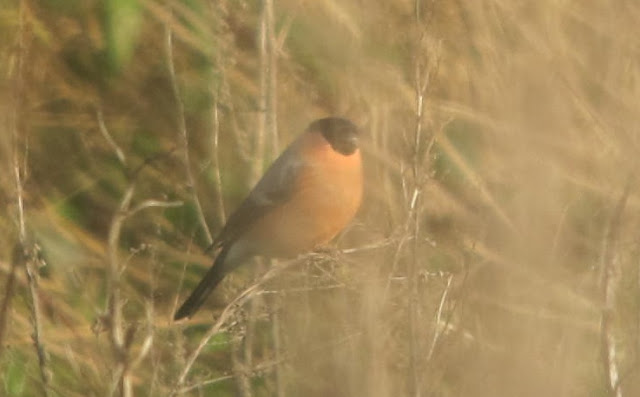 The Lesser Redpolls showed well, with one male beginning to come into summer plumage. Again there are better photos out there, but this is from the patch so has a particular relevance. 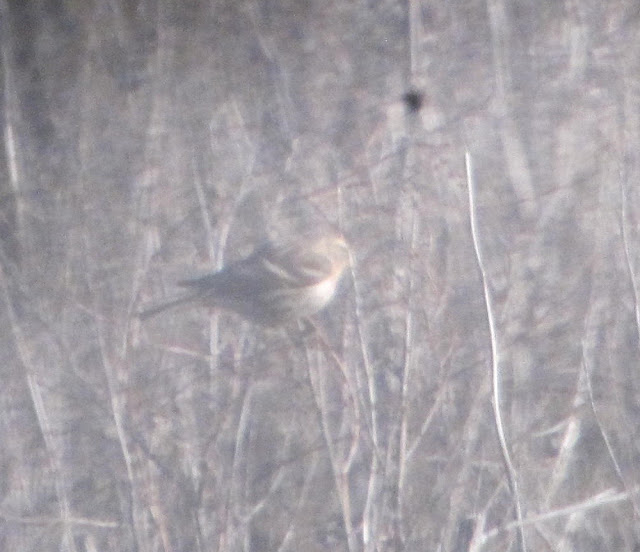 Dartford Warbler is something of a blot on my list. It's on there, Rame Head April 1984, but it was a fleeting view at best. The tail end of something diving into a gorse bush. Probably a Dartford Warbler. Possibly a Long-tailed tit, or maybe a Dunnock.

Blot no more! A morning visit to a frosty Rainham Marsh RSPB saw me finally getting decent views. One was following a Stonechat around which I gather is a frequent pairing, and for a skulking bird was being very showy. Sat out in leafless thorn bushes, perching on barbed wire, even singing. And a surprisingly nice bird to look at too - rusty red throat and underparts, a slight white moustache. Much nicer and easier than I thought it would be,

For a while it looked like that would be the only notable bird, but a Short-Eared Owl gave a cracking display near the rifle butts in the SW corner of the reserve. It even called a few times - rather like a deep-throated sneeze. Other birds worth a mention include 2 Marsh Harriers, a few Pintail, Kingfisher, 7 Stonechats, and the bizarre circumstance of having Jack Snipe in my year-list but not Common Snipe was ended when 7 Common Snipes flew over the frozen reserve.

Finally, some music. The death of David Bowie made me think of another star from glam rock - Marc Bolan, and I found this video from 1972 . It is worth looking at this with a perspective of 40 years of "progress". They look like they are playing our local village hall, but in fact it is Wembley Stadium. Just the four of them, and one (Mickey Finn) seems to do nothing other than bang a tambourine and try and get the audience going - a kind of proto-Bez. Various commentors note a marked resemblance to Mr Bean. Compared to the modern stadium concert with large screens, light shows, dancers, walkways into the audience and a host of backing musicians this show seems a complete shambles, a ludicrously naive thing to do. But there is, nevertheless, bags of star quality in Marc Bolan that seems to be missing from many of today's manufactured stars. Enjoy!

This weekend I've been out on the patch. Mostly it was a good range of the usual stuff (2 species of Woodpecker,  Common Buzzard, Sparrowhawk) , but there was patch gold hidden in a flock of finches. The numbers have built up recently and there was about 50 mixed Linnet and Chaffinch with a Bullfinch and on top of a dead plant a Lesser Redpoll.

Way back in the 1970's when I started birding in Leeds, Lesser Redpolls were commoner than Sparrows. In the garden, at school, whenever I went out, they were almost a permanent accompaniment. It did take me a while to be able to separate them from Linnets in winter. I know - completely different - but I had my Grandad's old Zeiss artillery glasses from WWI (he was British but borrowed them from a dead German), and I was young. I spent ages down at Golden Acre Park noting details of a flock until finally I was able to 100% identify them as Redpolls Linnets.

Party of that trauma remains, but the finely barred shawl and distinct wing bar were enough. The other finches routed around on the ground but this remained firmly on the head of a plant. It remained long enough to get a photo. Here indeed is the proof ...


I returned today in a light covering of snow, the scrape completely frozen over with some Teal out on the ice, and this time took the scope. A very pleasant hour was spent going through the flock, finding a few Reed Buntings, and about 30 Yellowhammers. And  two Lesser Redpolls, very neat birds sitting out on dead heads.

I know Redpolls are still common enough to not warrant a second look in many places, but these are my first for the patch in over five years of watching. There are a few local records on the Herts Bird Club site so I suspect the cold weather may have encouraged some inward movement.

With Siskin flying over this makes the patch total now 50 for the year.

I don't really do listing. No idea what my UK list is. But with this year being more uncertain than previous ones, I maybe able to do some decent birding so getting some year lists together could be fun.

I've borrowed some advice from the doyen of patch watching at North Downs and Beyond  and divided the world into three regions; there's the 'core patch' of south Sawbridgeworth and Pishiobury Park. this is mainly wet farmland and parkland. Then there's a wider patch region that covers (specifically) Trimm's Green and the high ground round Shingle Hall Farm, The Stort as far north as Stortford; Pincey Brook at Hatfield Broad Oak, and Hatfield Forest. Then finally there is everywhere else.

I've had a couple of walks round my core patch so far this year, and so far I'm on 42 species. Its poor, but I'm relaxed. Its interesting what you don't see on a normal walk round. No House Sparrows or Reed Buntings, for instance. There are a few winter thrushes, okay numbers of Yellowhammers and Linnets, and healthy numbers of Blackbird, Robin, and Dunnocks amongst others. So far the only notable species are Little Egret on 4th, and Common Gull on the deck. Plenty of the latter fly over on their way to roost, but not many actually touch down.

anyway, here's some sights from around the core patch. 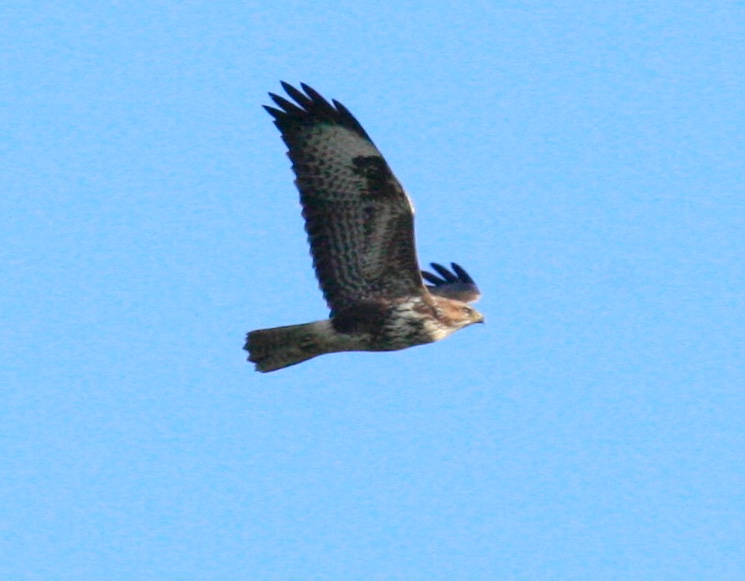 Finally a good-bye to David Bowie, a star of mine and lots of other people's youth. I'll post a few of the more obscure tracks starting with this early one from The Man Who Sold The World,  The Width of a Circle