I've been taking lots of photos of Bumble Bees recently. Here's a few that have me stumped, and one firstly that I'm reasonably happy about.

1. I think this is male Vestal Cuckoo Bee (Bombus Vestalis) due to the yellow on the edge of the white tail and the faint yellow midriff band. On the brambles near my house this seems to be the commonest bumble bee. Odd that a parasite should outnumber the host, but there we are. 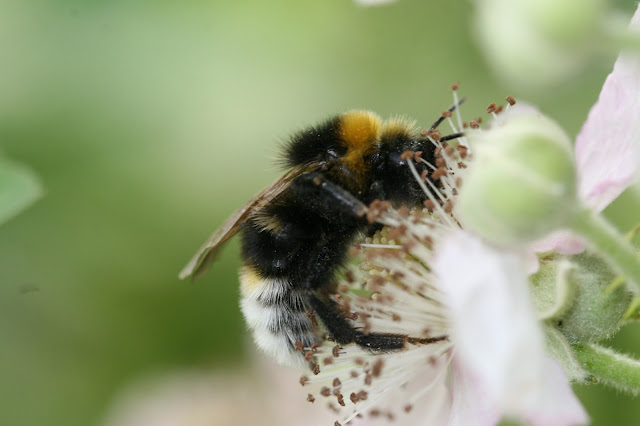 2. Again on brambles in a local wood. Two shots of a completely smooth bee apart from a yellow frill. I think this is just a completely hairless worker bee of a common species, but only because I cannot find an alternative explanation. 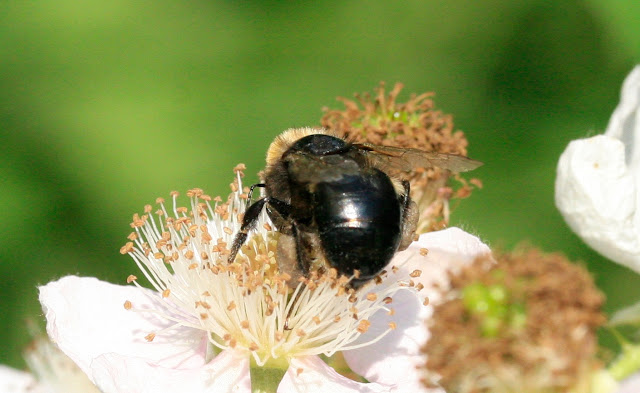 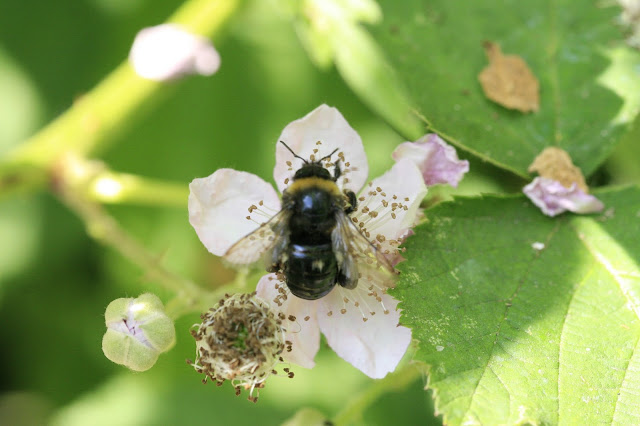 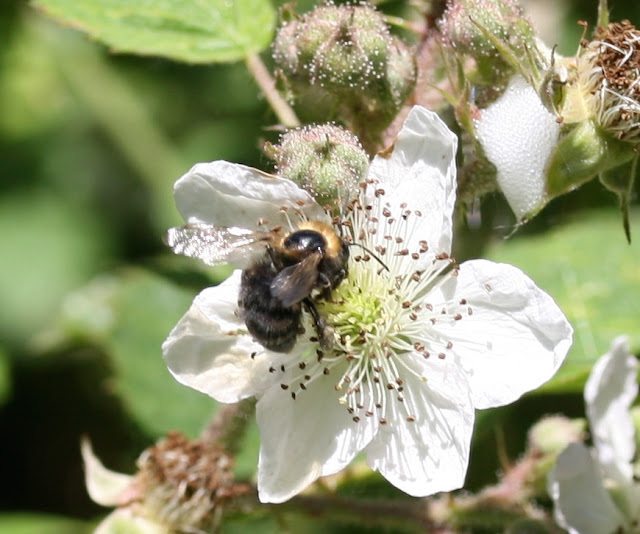 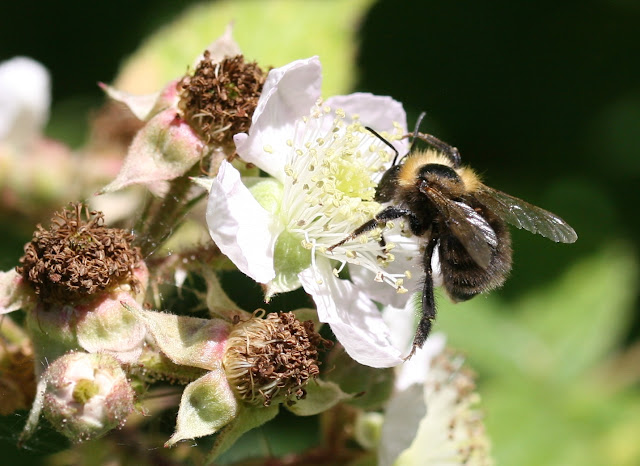 4. This was taken at Thursley Common in Surrey. A dark bee with a greyish white tail. On close inspection it has a faint collar and midriff so I suspect it is just a variant of a common bumble bee. There were at least two like this. 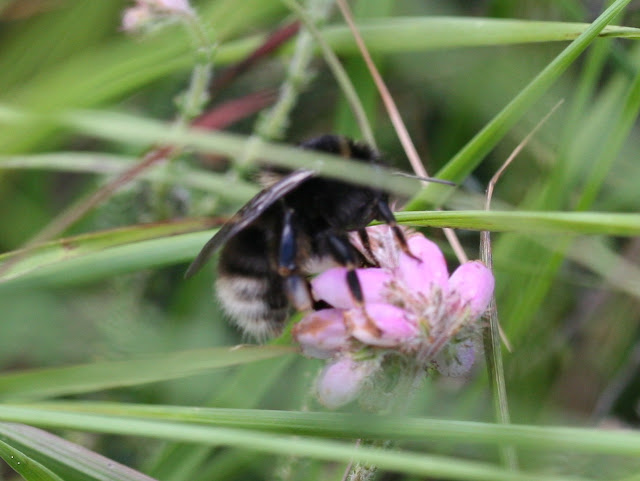 5. From a recent visit to Hatfield Forest. It looks like a common bee except for the profuse yellow on the head. I thought at first it might be Early Bumble bee but on looking in my book Barbut's Cuckoo bee also has lots of yellow on the head. So I'm confused, again. 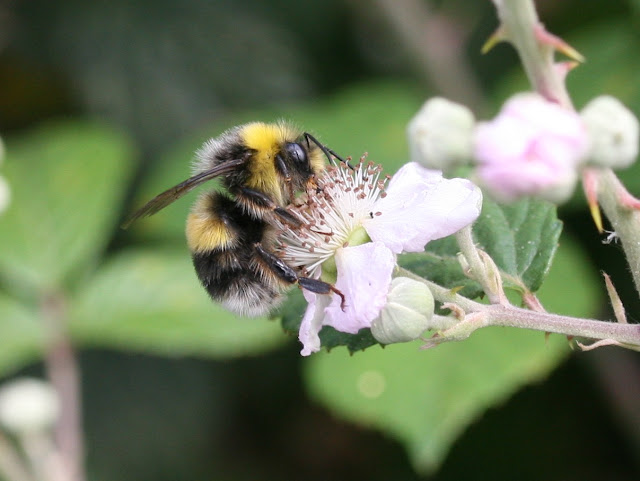 6. And finally another from Hatfield Forest, and all black one. I couldn't get round the right side of the bush to get a decent photograph so sadly these will have to do. My book indicates there is a form of male Field Cuckoo Bee that is black, but I don't think there is enough on this to confirm an id. 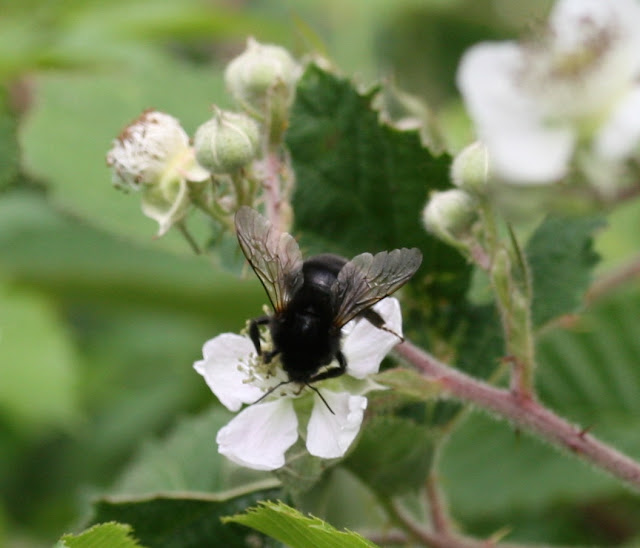 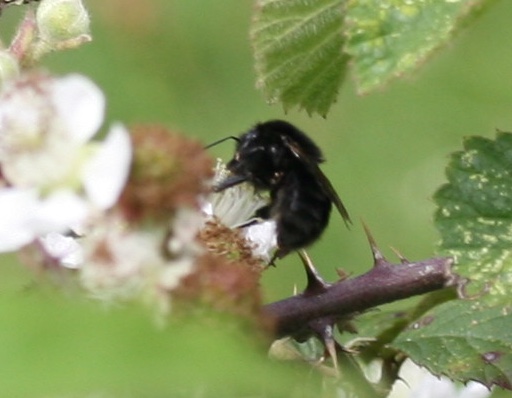 Having spent a few decades watching birds and being pretty confident about identifying any British bird on a good view, its fun to go back to the start with a new group of creatures. I haven't yet got a feel for what is variation within a common species and what marks out a different species. And I still haven't been able to point at a bee and say "thats a Garden Bumble Bee" event though I'm sure they are all around.
at June 27, 2017 2 comments:

D#3 going on what now appears to be an annual pilgrimage to Thorpe Park. This gave me most of the day to do with as I pleased. Last year I did Box Hill but this year David came along and we went to Thursley Common.

Redstart - a beautiful confiding male by the Moat Pond Car Park, Hobby, a brief Dartford Warbler, and singing Tree Pipit gave us what would be a pretty decent list by itself, but we were primarily interested in the Odonata. A first go at some of these for me. My Id guesses in the photos below.


Then on to Oaken Wood for butterflies. We saw Silver Washed Fritillary, some high-up Purple Emperors, and lots of White Admirals. Its been a while since I saw this, and was fortunate to have one pose for me. 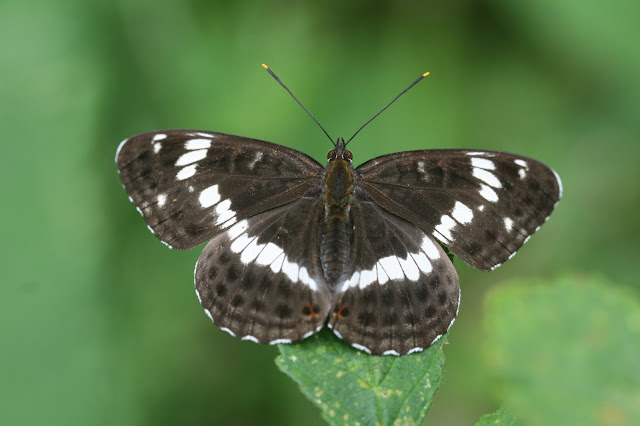 I found the searching for odanata really quite relaxing. A gentle stroll with lots of looking, then when seeing one waiting for the dragon to return to its post or complete its circuit. Mrs D tells me this is Mindfulness. I think I can quite happily have some more of that.
at June 25, 2017 No comments:

Email ThisBlogThis!Share to TwitterShare to FacebookShare to Pinterest
Labels: Dragonflies

Possibly the only thing to be said for the snail's pace of traffic in this area is that you get plenty of time to look at the road-side verges, and with this being early summer there are lots of flowers to admire.

I though I spotted some Bee Orchids today so returned mid-morning to find 22 spikes by a local main road. Further up the road the flowers I had thought were Common Spotted Orchids were indeed that species. Also a couple of Pyramidal Orchids out on a local roundabout. It turned out there were Bee Orchids at all three sites I stopped. I guess the shorter spikes are not that easy to pick up from the car.

I'm not sure how these got here. It is tempting to think these flowers naturally occur here, and the occasional mowing and attention from rabbits makes a supportive habitat. The alternative explanation that I've heard from a Landscape Gardener is that when a new road is constructed the contractors buy a load of mixed seed which contains daisies and various other standard species and a few orchid seeds for good measure, so these are effectively introduced. Whatever the explanation, these beautiful and intriguing flowers liven up our local environment. 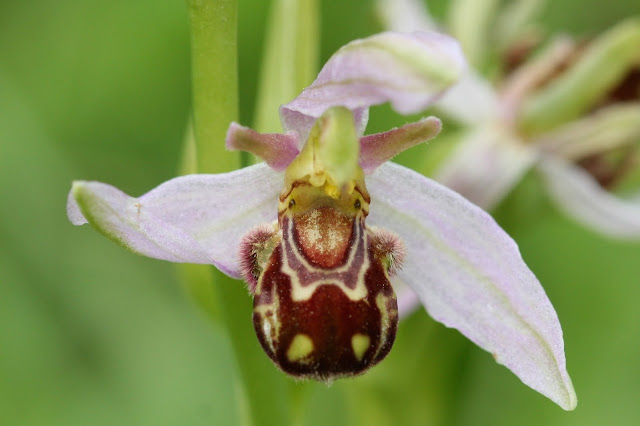 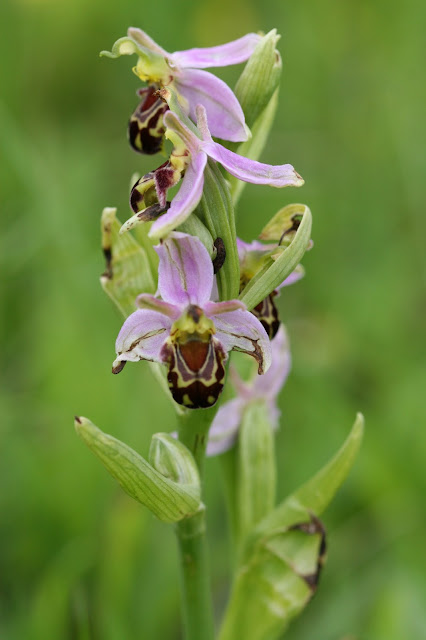 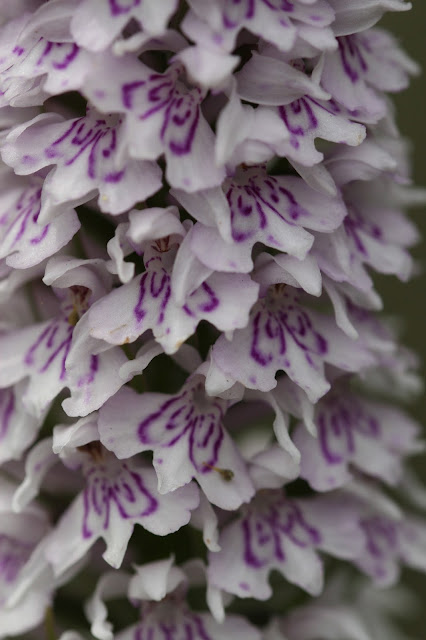 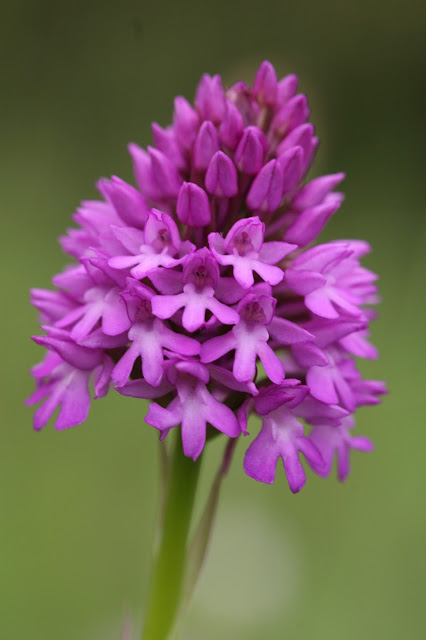 Email ThisBlogThis!Share to TwitterShare to FacebookShare to Pinterest
Labels: orchids

Summer on the patch

Summer on the patch. Birds are busy raising young, so not much change to report, but insects are beginning to appear.

Bramble bushes in particular are insect magnets. Here's one in a wooded area so protected from wind, and it was alive with bees. 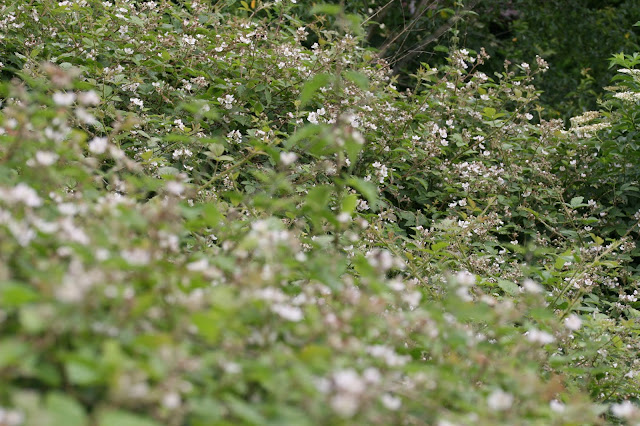 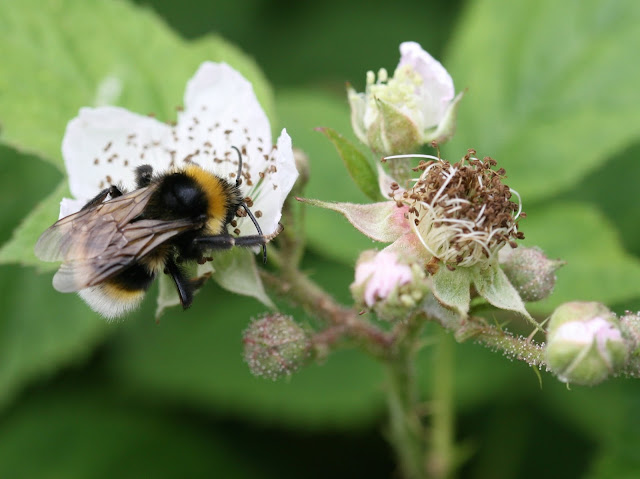 This looks like a male Vestal Cuckoo Bee (bombus vestalis).  It has the distinctive yellow tinge to the edge of the white tail, and has a band round the top of the abdomen. 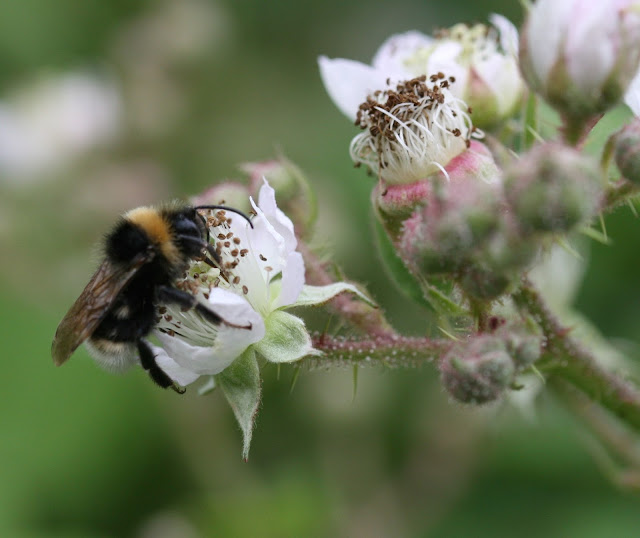 This and the one below look like a female Vestal Cuckoo Bee (no middle ring). 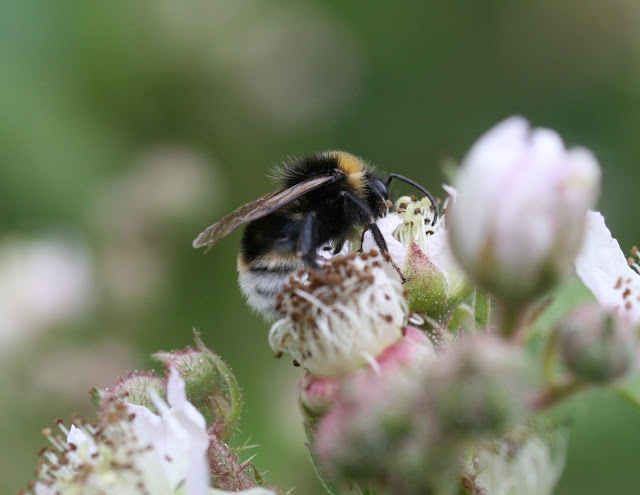 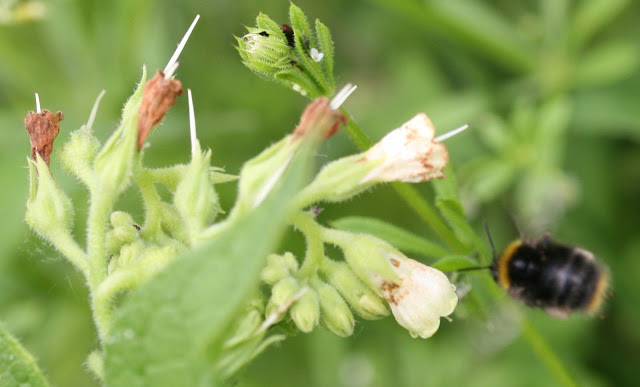 I don't know which this one is. It is a female worker bumble bee (has pollen baskets) but has no middle band. 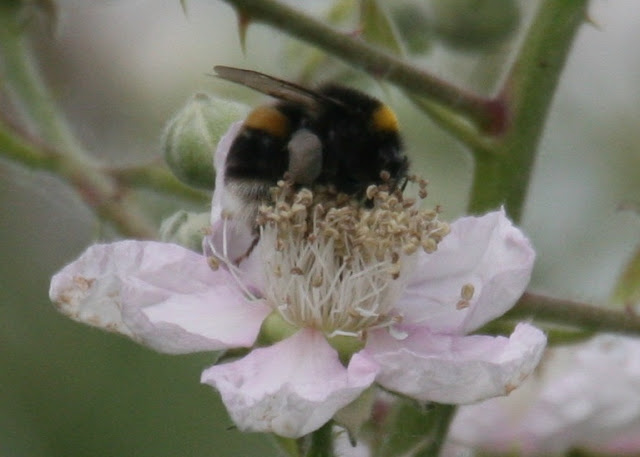 This is a worker (pollen baskets again) and is straightforwardly either a buff-tailed bee or white-tailed bee.

Then a couple of hoverflies, both of which are I believe Volucella Bombylans. These mimic bumble bees, the first one mimicking red-tailed bee and the second white-tailed bee. 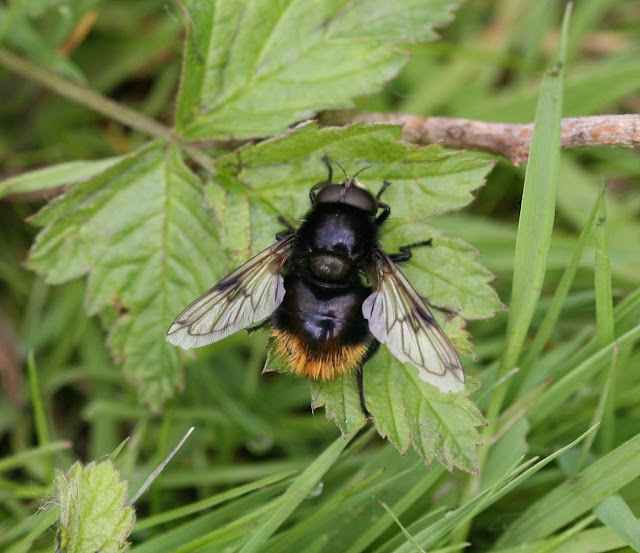 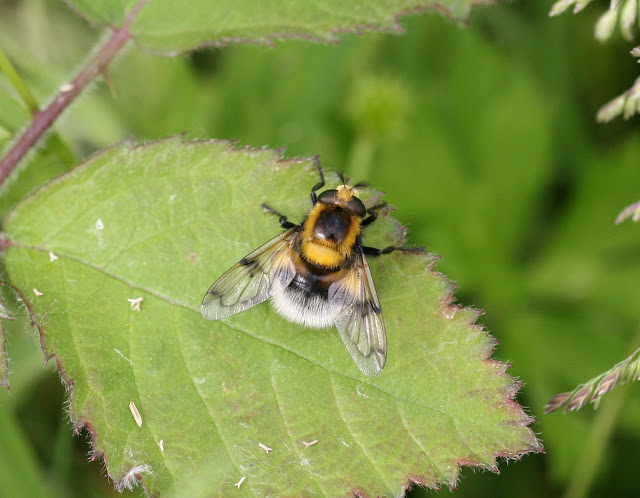 Now on easier ground. A male Large Skipper - first of the year. 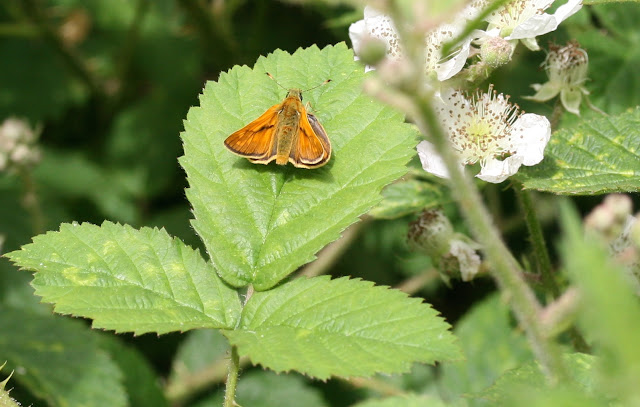 Finally a Whitethroat, and then one of the more notable birds of the patch. Please leave a comment when you have found it! 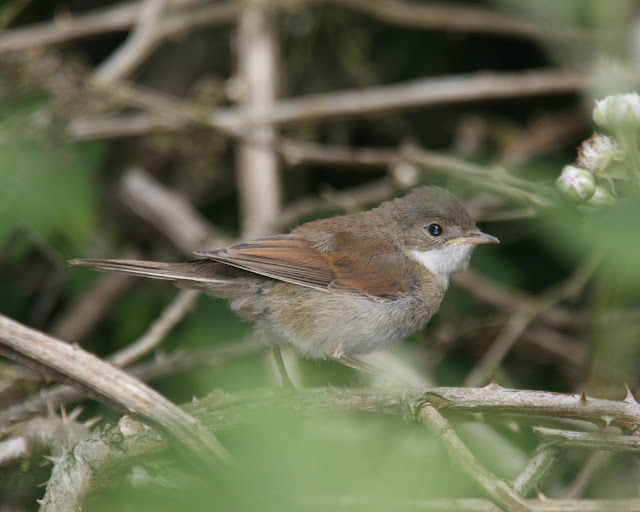 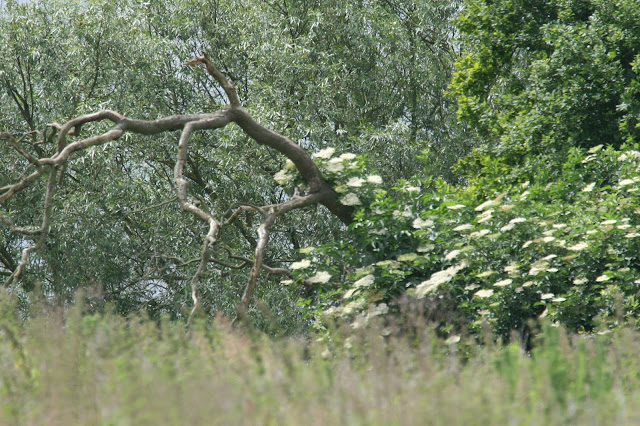 Out and about on the patch. More photos to follow but I came across this. It is, I believe, a Mayfly - I have no idea which one. Look at those wings! Amazing! 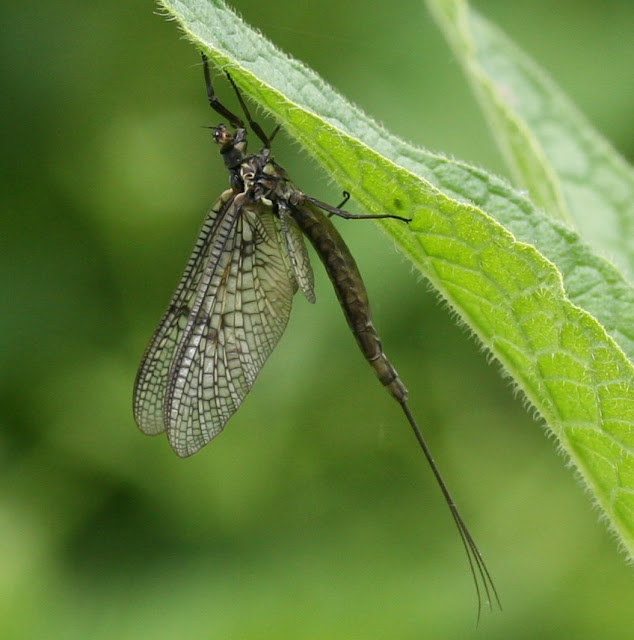