Bramhope revisited - and the importance of comprehensive note taking

A bright morning walk to revisit old haunts round Bramhope. I walk I used to do periodically from the mid 1970s to the mid 1980s. Walking down Long Meadows a loud screeching turned out to be from a Little Owl sat in a tree on the edge of the field. Then past Old Rushes Farm. This used to be a tumble down couple of barns but is now all done up and inhabited, not just by people but by a small flock of Tree Sparrows. Up to Paul's Pond and a Little Grebe in with the Tufted Duck and Canadas. Up to the slopes of Golden Acre Park, and where once children sledged down a grassy slope there are now trees of all shapes and sizes, and consequently a family party of Bullfinch and a Nuthatch. Up to Lineham Farm where two Willow Chiffs hooet-ed in the bushes, back to Bramhope where an Oystercatcher flew high over.

I checked my records. I used to have Little Owl at the tumble-down Old rushes Farm, clearly not one there now. My records showed Tree Sparrows at nearby Adle Dam but no records from anywhere on the walk, and to be honest I have absolutely no recollection of seeing Tree Sparrows at the Dam. And no flying over Oystercatcher records either. Add the Ubiquitous Red Kites and that's four new species-records for the walk. In addition I had Nuthatch calling from all reasonable size bits of woodland (about 5 in total). I have Nuthatch records from Adle Dam but not anywhere else.

So has there genuinely been an increase in Tree Sparrows and Nuthatches? I'm just not sure my old records are comprehensive enough. If I'd done then what I do now, which is to regularly record all birds seen on my standard patch walk, I may have a reasonable basis for comparison.

If I could go back in time and have a word with my younger self, I would say - just once in a while, record everything you see. Things that seem commonplace and dull today may become of great interest in later years. And you will need to know that if its not on that list, that means it wasn't observed, not that you couldn't be bothered to note it.
at July 23, 2017 1 comment:

A couple of trips. Firstly Rainham Marsh RSPB. Marsh Harrier and Bearded Tits notwithstanding, it was all about the insects. There were masses of workers on the Lavender in the car park and I think these were Brown-Banded Carder Bees, mainly because at least one of them was a carder bee with a brown band. Difficult to photograph in a suitable pose, I am nevertheless quite pleased with the art in these photos. 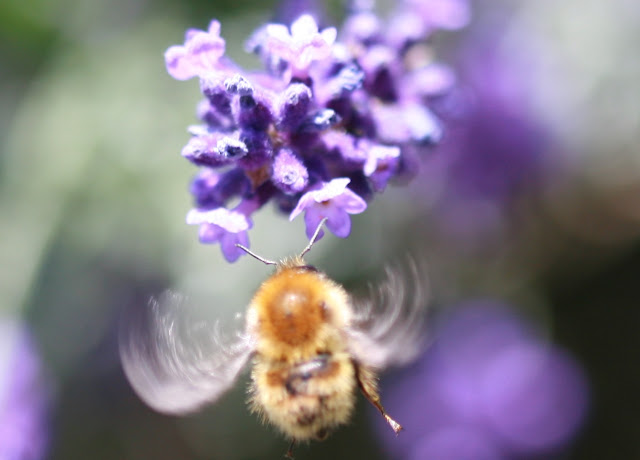 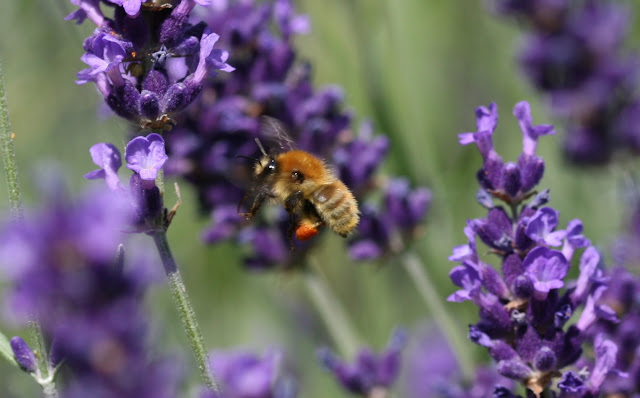 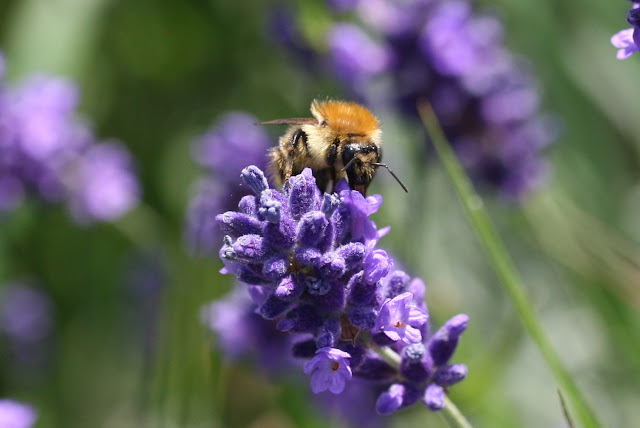 Then a few Shrill Carder Bees, an Emerald Damselfly in the Cordite area that I am told is a Willow Emerald, and some more common stuff - the Hornet Mimic Volucella Zonaria which I now see more often than I see Hornet.


Then with David today to Stansted Airport Lagoons for waders followed by another trip to Hatfield Forest to see Purple Emperors. Needless to say this did not go as planned. There was a lone Lapwing at a very full lagoons, but there were up to ten damselflies on algae pads on one of the lagoons. David was sure these were Small Red-eyed Damselflies and having looked at photos the step on the end of the abdomen does match the photos and is quite distinctively different from Red-Eyed. A flicker in the foliage turned out to be another Willow Emerald.  We left the lagoons quite happy with our haul and went to the Forest. We walked round the NW corner of Hatfield Forest finding little new in the way of Butterflies, and no sign of the Emperors but did see plenty of Ringlets and Gatekeepers sunning themselves. We paused from looking down long enough to see a Raven fly over which is a good record for the forest.


Finally a reminder that wildlife is exploding all over. David's eagle eyes spotted a freshly emerged Six-Spotted Burnet Moth. Quite fantastic it is too, with its damp wings still creased. 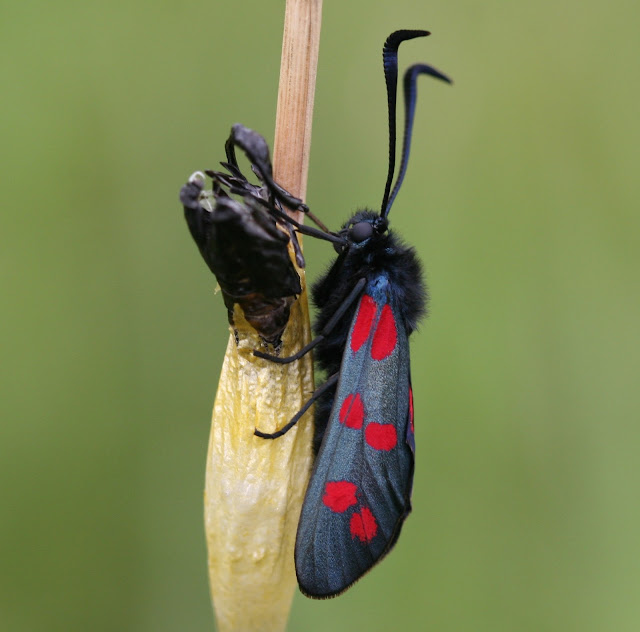 A mid-day mid-summer walk round the patch. It's Groundhog Day. Everything that was here yesterday is here today, and will be tomorrow. So not much of note today? Well, that depends on your perspective.

Bird-wise it was hard. Reed Warbler, Sedge Warbler, Lesser Whitethroat all present singing away, but unseen. Reed Bunting and Greenfinch a bit more obvious. A Herring Gull over was noteworthy for the patch. Buzzard and a pair of kestrels less so. Plenty of young birds - family partiers of Chaffinch and Long-Tailed Tit, and a Little Owl in its usual tree was on its own, although I am told a pair fledged young here this year.

There were plenty of odonata by the river as well, but nothing new; Emperor, Brown Hawker, lots of Banded Demoiselle, and from the Damselflies there were Red-eyed, Azure and Blue-tailed. The canal had lots of vertical blue damselflies I guess ovipositing on vegetation - quite a sight.

There were butterflies too - a Marbled White, plenty of Meadow Brown, Ringlet, a Small Tortoiseshell, and Essex Skipper and Gatekeeper were new for the patch for the year.

There were bees too. My favourite the male Red-Tailed was out for the first time this year, and there was a hairless bee as well. I can see some tufts on the body so it may be a bumble-bee that has lost its hairs, or it may be a mining bee of some description. I'm thinking the latter, as I don't see too many semi-hairless bumble bees, just fluffy bees and these hairless ones, so I'm thinking they are a separate genus altogether.

then by the bridge over the canal some freshly dug holes, and some insects using them! There was a black-and-yellow wasp-like thing going in and out. Very hard to photograph but miraculously I got one hovering, and also one digging out the entrance to the burrow.

I think these are some kind of Field Digger-Wasp. They drag paralysed flies into the burrow for the young to feed on. I didn't see anything being dragged in to day, but I did see some smaller wasp-like things with reddish bodies. The closes I can find is a kind of Sawfly. Again I think these are parasitic.

UPDATE: having posted this I'm now not so sure about the ID. Field Diger Wasp has yellow on the thorax just behind the neck and at the base, but this has a completely black thorax.
SECOND UPDATE: tweeted the picture and got a great response back from Ian Beavis at @TWBC_Museum - Ornate Tailed Digger Cerceris rybyensis - isolated all-yellow segment is distinctive