It's that time of the year when the winter specialities are departing and nothing new has come in, so it gets a bit desperate. A couple of year ticks and more were up in Suffolk, so Friday saw me and David at Minsmere, Mike being unavailable.

David's foot injury has been taking a time to heal, so I promised I wouldn't thrash round the reserve, but ... we did the adder spot on the sand martin bank. Nothing. North Hide. Nothing. Adders again. Nothing. Island Mere. Nothing. Obviously there wasn't literally nothing, there was a year tick in the form of a Coal Tit, I missed a Bittern at Island Mere, and there were a lot of Marsh Harriers. We finally got the Adders around mid-day on the Sand Martin bank, two males slowly waking up before they slithered off.

If you go, walk round the north side of the dragonfly pool, and in the middle of the bank right by you is a grey pipe. They were about a metre above that, slightly right. Fantastic.

Then down the marsh side of the scrapes. It was nice in the sunshine, with plenty of Wigeon, Shoveler, Avocets, and handfuls of Black-Tailed Godwit, Dunlin, Curlew, Ringed Plover, Turnstone, and Pintail. So very nice. But no Smew which was our target. I popped down to the Sluice to see if the Lesser Yellowlegs was around, and it was! Fantastic views, a grey washed out Wood Sandpiper-type bird. And those legs, so bright yellow. I went back to collect David who was resting his injured foot in a hide, and dragged him round just in time to see it flying off. Sorry David.

From there it was back along the seaward side. Stonechat flycatching in the sunshine, two female Common Scoter on the sea. And a long sit on the bench to enjoy the afternoon sunshine. And that was it.

Except not quite. As we were leaving we mentioned to the staff we hadn't seen the Smew, and they pointed us towards the pool by the viewpoint, about as close to the centre as you could get, and there was the pair. a male is a tricky bird these days, and this one was fantastic. Thanks you RSPB staff.

Then as we were leaving, a herd of Red Deer on the Heath. 32, all hinds from what I could see. Just huge beasts. Scope filling views. Fantastic.

So in the end, a very decent list. And David got his adder photos. Fantastic they are too They are on his blog, and a bonus three from David below. 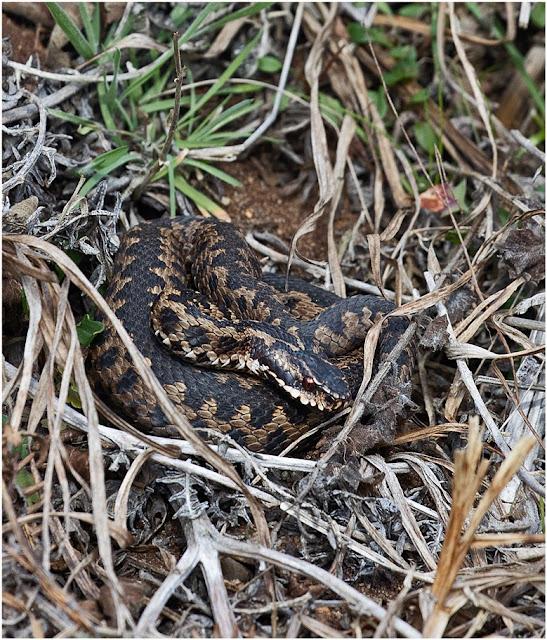 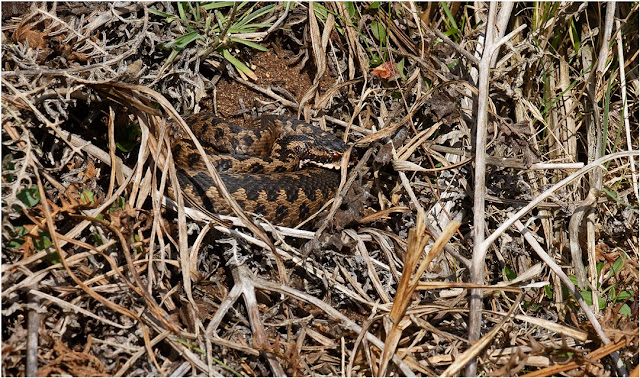 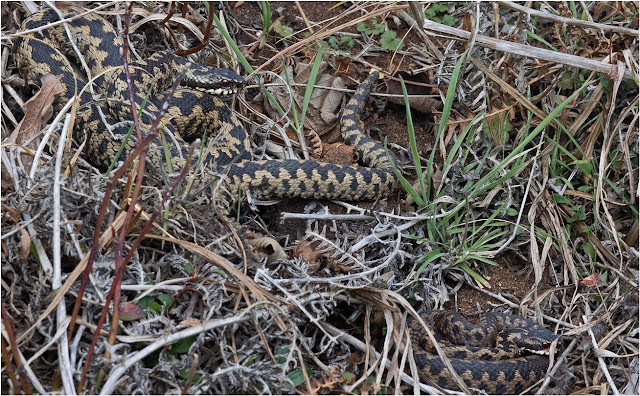 Red Necked Grebe can be a difficult bird to get on the year list, but over the last couple of years Abberton has delivered. I saw one towards the end of last year but this year so far the resident bird has been a bit elusive, with just the occasional record from Abberton church. So this Saturday morning I dropped Mrs D off at her usual morning session at the library and went straight there.

I thought it was going to be hard particularly when I saw the wind roughing up the surface, but I scanned across and there it was, nonchalantly bobbing around like butter wouldn't melt in its beak. Difficult? Moi? It was mid-distance, but in the scope clear enough for me to think the vertical stripe on the face near the ears made it a bird hatched last year. Fantastic. Hadn't expected it to be that straightforward or such decent views.

And with that I did a quick couple of stops at the causeways before heading back. I saw Long-Tailed Duck, Scaup, Goosander, Smew, White Fronted Goose (now down to 16) Pink Footed Goose, Black Tailed Godwit, Ruff, Golden Plover. And I wasn't even trying. Most of these birds were ridiculously close.

I was asked, when chatting with a fellow birder in Kent on Monday (Excellent. Couldn't miss, again. Shorelark, Hen Harrier, Merlin, Glossy Ibis, Black Throated Diver, Greenshank) whether I went much to Amwell given it is in my area, and the answer is no. Its hard to explain but I think if I'm going to get in my car and go out of my immediate area, it is hard to resist the pull of Abberton. It's like having a three-star Michelin restaurant in the neighbouring town. Why would you go anywhere else?

Email ThisBlogThis!Share to TwitterShare to FacebookShare to Pinterest
Labels: Abberton

Lack of posts does not mean lack of birding. I've been reasonably busy year-listing.

I'm not a great one for listing for the sake of it, But for me it gives me a target, a place to go, a plan for the day, and as a well known non-birder might have said, good birding is what happens whilst you were busy making other birding plans.

Mike and I had an owl day. Long-Eared, Little, at you-know where, and then Short-Eared Owl at Eldernell with a couple of distant Cranes. We were drawing a blank with the Shorties until a local birder pointed us to the relevant field, and in particular a small bush in the middle with a distinctive set of logs and branches and a very distinctive roosting owl. Of course, of course, how could we not have noticed the giveaway trampled grass round the edge of the field. Doh. And if I had a pound for every photo of that stump and that owl that has been in my twitter feed, I could afford my next fuel bill.

Then Old Hall Marshes. The full version. Blimey that's a long way. I had a 'doesn't seem that far' moment, and then realised the bend was not the start of the way back, but half way along the way out. Anyway, we had a couple of Merlins perched up, the second looking quite small with, on full zoom, light feather edgings on all its back feathers, so an imm male for me.

A young (in comparison) couple, looking like they had just stepped out of an outdoors clothing catalogue, came the other day, he with rubbish binoculars. We said hello and offered them a view of the Merlin down the scope. They were thrilled, in awe of this tiny falcon, and then excitedly telling us of the Bearded Tit they had seen. It is easy to get cynical about the quality of the birds we see on our trips, dryly exchanging lists of scarce birds with other equally laconic and weary old birders, but there, in that reaction, of those two young folk probably on one of their first wildlife expeditions, is the emotional truth of our pastime. The thrill and excitement of seeing a hoped-for bird doesn't diminish over the years, even if our reactions may. We added Ruff, then Great Northern Diver off the end, but the recently reported White Fronted Geese had given us the slip.

Then the annual visit, that 'will it be worth it?' trip to WWT Welney. We paid up, paused at the cafe view over Lady Fen where a lone lady asked if we were experts? Well, modesty forbids! But I'll have a go. That pipit over there? Scope up and yes, madam, you were right to point that one out, and thank you for adding Water Pipit to the year list.

Onwards to the Main Observatory and the day's target couldn't have been easier. Nine Tundra Bean Geese, asleep right in front. The darkish heads and give-away broad white edges to the flight feathers marked them out, and soon enough they got up and wandered round. Surely the best ever view of wild geese.

At the next hide a flock of distant Swans turned out to be Bewick's Swans. I find these hard to see on an annual basis, relying on Abberton bringing in a couple each winter, but this flock was thirty strong, with a couple of juveniles, and made excellent if somewhat distant viewing. I find a view of winter geese and swans isn't really complete unless you hear them call and see them in flight, and a small group obliged by calling loudly and flying off, their slightly faster wing-beats being clear in comparison to a pair of Whoopers passing.

Finally, the key Welney Species, the one all the birders come for. It took a while, but eventually there it was, on the feeders, Tree Sparrow.

Then yesterday a small window of opportunity and it was back to Abberton. firstly Layer-Breton causeway, and a ridiculously close flock of wildfowl-collection tame White Fronted Geese. 31, plus a Pink-footed Goose. They flapped a bit showing off their barred bellies - they seemed to be mainly adults - then obliged by flying off to feed on a field, and then flew back, calling, flying around. Surely the best ever view of wild geese.

I got Smew here too. A redhead, sitting comfortably at close range in front of its usual reed bed. I watched the geese for a while, then mentioned to a couple of birders the really easy Smew on the other side of the road, we crossed back over, and of the Smew there was absolutely no sign.

Finally, Lodge Lane on the eastern side. This is a difficult access point due to lack of parking, but top Essex Birder Darryl had recently posted a request to park in Peldon Community Centre car park and walk up, so I did. It's a non-trivial walk, but easily doable, and the views were excellent. Lots of Wigeon, a few Goosander, about 30 Dunlin, nice views of a male Marsh Harrier, and then in the distance amongst the many Great Crested Grebe, something smaller. Clearly a Grebe, more black and white and without the distinctive silhouette of Red-Necked, probably one the Slavonian that has been seen on and off over the winter. The silhouette lacked the peaked-forehead of Black-Necked but could I be sure, at this range? It was one of those moments where I have to ask what kind of birder am I? Am I  birder of integrity, who's list only contains cast iron certainties? Or am I the kind of birder who will bump up their list on the flimsiest of view? Well, there's only one answer to that. 131. Slavonian Grebe.