Climate change from the last ice age to the present day

The last ice age ended around 11,000 years ago. The temperature rose by several degrees over a period of around a thousand years to produce a climate we recognise as being similar to our own. Since that time the climate has been roughly constant with some notable periods of variation. Within the time period of recorded history there was a warm period around 0 AD, again from 950-1250 AD (the Medieval Warm Period) and between them cooler periods such as the Little Ice Age (1250-1650). It is instructive to note here that temperature changes are under a degree. 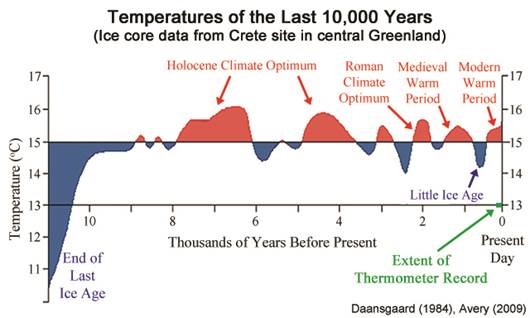 The causes of these events are unclear. There are cycles between ice ages such as the Dansgaard-Oeschger cycle that occurs every 1500 years (called Bond events in the Holcene [1]). This cycle may be oscillatory in nature shuttling heat between the north and southern hemispheres; warmth flows from one hemisphere to the other, causes melting which disrupts flows of warmth between hemispheres, resulting in cooling happening again. The two warm periods noted above only occurred in the northern hemisphere so may have been due to these Bond events.

Solar cycles have been identified as being a forcing event for the climate [2,3,4]. Periods of sun-spot activity have an eleven year cycle and show some correlation with recorded temperature.

When reading about these periodic variations some issues become apparent. Firstly, the temperature changes are small. It is worth noting that an El Nino can raise the global temperature by a few tenths of a degree [5], so these periods are within the natural variation of global temperatures. Secondly the periodic cycles that occur in the sun and earth’s rotation are not set to clockwork and there is still lots of debate about when these events happen. Thirdly a big volcano can fill the atmosphere with dust particles that reflect back sunlight and reduce the temperature, so it is believed that a massive explosion from Krakatoa caused diminished sunlight and crop failure from AD 535-536 [6]. The lack of clarity round past climate variations and events has two consequences for the global warming debate; it enables frequent re-interpretation of data to retrofit cyclic factors, and it means there is no clear prediction from cyclic solar or orbital effects  that allow refutable predictions.

This brings us to the modern day and the issue of whether the warming we have recently experienced is due to human activities.

Up until recently the observed temperature changes have been around a degree in size. This, as we have seen, is within the limits of much historically observed variation. The hiatus observed since 1998 gave rise to debate as to whether anthropogenic CO2 was the cause particularly given some of the alarmist extrapolations that had been made following the El Nino of 1998 [7]. However the last two years have seen a resurgence of temperature rises taking the observed rise to just over 1.0C from the minima earlier last century. This is at the top end of what was observed in previous warm periods, and even allowing for a temporary spike due to El Nino this rise is going toward new territories.

On top of this the rise in CO2 is marked, although even the amount of CO2 and role is open to some dispute [8 - 10]. Nevertheless, for many scientists the CO2 level is the really scarey bit that is clearly going into new territory rather than the current temperature. The excess CO2 will continue to trap more heat even if we do not add to it.

Its time to make a decision and come down on one side of the argument or other. As someone with a background in physics I find the lack of accuracy and consistency in the data, the lack of experimental evidence that clearly distinguishes between competing views and the poor track record of climate predictions are all frustrating. The basic physics is clear however: CO2 is a known greenhouse gas. There has been a clear increase in atmospheric CO2 to a level not seen since the last ice age. The amount of the increase is about half the total amount emitted by human activity so is consistent with the notion that human activity has caused this increase. The temperature increase is consistent with what would be observed by this increase in CO2, but the relationship is a very broad one. The retained energy is quite small – equivalent to half a days sunlight per year [12], hence the slow growth in temperature we see.

The two main argument against anthropogenic CO2 are a “not proven” case and a “cyclical climate change” case. The “not proven” case is that the scientific evidence is not strong enough. There is endless querying of measurements, picking out anomalies, and pointing out the failure to predict the next few years in particular the inaccuracy of the more alarmist predictions [7]. Personally I think this case was not without merit until the last couple of years, but the latest uptick in temperatures add to the trend and take it beyond historical limits and into new areas. The balance of probability is that given the unprecedented CO2 levels and the associated greenhouse physics, the long-term trend is in line with what we would expect.

The “cyclical climate change” argument as promoted by people such as Christopher Monckton [13] lacks credibility. There is no clear candidate causative cycle to promote an alternative explanation. Instead we have a quasi-religious argument (see last Climate change post) in that the argument makes no predictions because everything is possible, and any variation of the size we are seeing can be explained after the event as natural variation. Proponents of cyclic variation fail to have any convincing explanation for the massive increase in CO2 levels, and have no explanation why the temperature increase was caused by this cycle and why the increase in CO2 has no effect on global temperatures despite the physics which says it should and has thought the earth's climate history.

I suspect these arguments will not go away. It is quite likely in my opinion that we will see a drop in temperature next year as La Nina replaces El Nino and no real rise over the next ten years [see 14 for measurements of the temperature dropping now from the peak earlier this year], but then there will be another El Nino and another notch up in the temperature. It is possible that the temperature keeps going up from here on and I will cover how that could happen in future posts. What is very unlikely is that the temperature will head back down to the historic average. No-one on the planet has a convincing mechanism that explains how that would happen.

So, with the discussion about man-made global warming having reached a conclusion, I’ll put this to one side and start to look at some of the possible consequences in future posts.

Posted by DorsetDipper at 9:48 PM

Where does the dansgaard 1984 graph come from? After a 30minute search on Google I find many referring to it, but I can't find the source. I need to be able to back up its authenticity before using it myself.