Dashed up to Hatfield Forest to see the Silver-Washed Fritillaries that are on the wing here in Lodge Coppice. There were a few records a couple of years ago that have mushroomed into people seeing ten plus butterflies. 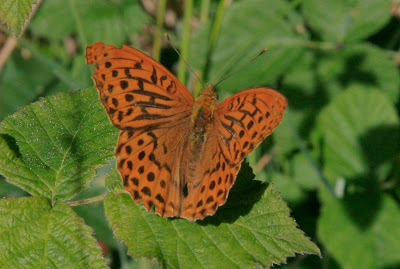 I got a decent photo of a tatty male out of it, and if you were to look at my shot and some other folks visits then you might think the bushes of Lodge Coppice are festooned with SWF's sitting out in the sun waiting to be photographed. But they aren't. They were easy to see, but are strong fliers and seemed loath to settle. And I had the wrong lens - just a usual one, and my 100-300 mght have done the job better. Other butterflies - Peacock, Red Admiral, Brimstone, Ringlet, Gatekeeper, a blue, Meadow Brown, Large White, were out and some settled, but not so as I could get any decent shots.
at July 25, 2010 2 comments:

As its midsummer and the days are long, I figure I should get out after work and see some birds. So despite the heatwave (mid 30s plus humidity) I get the subway to Davisville, walk a block south, and uncharacteristically for me find an entrance to Mount Pleasant Cemetery immediately. The cemetery is a beautiful, peaceful place. It’s like a large arboretum, with manicured lawns, tarmac walkways and some very lavish memorials. Its well used by joggers, cyclists, and dog-walkers, but being Canada they have the world’s politest dogs that trot by without fuss.

Its obvious from the outset that this will be hard work. The lawns are no good for birds, so they will be up in the trees. Being in North America the subconscious filter that in the UK means I don’t bother following up most bird calls doesn’t work, so I have to follow everything, and as soon as I see something I have my nose in Sibley instead of on the bird. Nevertheless, there are Black Squirrels, Grey Squirrels, and Chipmunks running over the lawns, and a handsome Robin allows close approach. This is very exciting until I realise that just about every bird that sits out on a tree-top, flies between trees, or bounds across the lawn is a Robin. By contrast a pair of Blue Jay’s come over to have a look at this curious visitor.

Following my birder’s instinct I head for an area with overgrown banks, and a ravine with a stream. However, I see nothing but a pair of Mourning Doves, a Red Admiral butterfly, some streaky finchey things in a tree and above Chimney Swifts whizzing round the sky and Ring-Billed Gulls drifting down to the lake front. I give up and head towards the centre of the cemetery and things pick up. Eventually I realise that the over-size chicken sat in a tree is in fact a Red-Tailed Hawk. Then on to the Eaton Mausoleum and at last I find a tree chock full with birds. There’s nine Robins, and a reddish bird that is a House Finch. There are two birds chasing each other through the tree, and I get a clear sight of it and it’s a slate blue back with an all white underside – White Breasted Nuthatch. A familiar type of call and a party of Black-Capped Chickadees move through. Back to the tree and picking through the various birds there’s a stunning Male Baltimore Oriole. The Nuthatch is back, but its got a deep rufous breast and a stonking eye-stripe – Red Breasted Nuthatch. I try to get a better view, lose it, and then find it again, but now its got a black back with fine white barring; Downy Woodpecker.

Its getting late, and as I don’t fancy spending the night alone in a park with a few thousand dead people I leave and get the subway back to Union Station, walk across Front Street and go and sit at the Sushi Bar in Benihana in the Royal York hotel. I have a couple of Asahi beers some Sashimi and Sushi, and write this.
at July 10, 2010 1 comment:

Elvis, normally a quiet well behaved dog, has recently taken to standing in various corners of the garden barking his head off. It took a while for the penny to drop - we have a hedgehog! Its only a small one - less than six inches long, and is normally to be seen curled up 6 inches from the snout of a barking dog, but once Elvis is removed he uncurls and waddles off.

The children were very excited to see a real live hedghog in their garden. The only other ones they had seen were on a road, and I think they had thought a hedghog was a flat dinner-plate shaped creature.

The excitment didn't last. They decided, strangely, that the hedgehog needed a name, whereupon the standard arguments started. D#2 decided it should be called Arthur. D#3 said no it was called Spike. D#1 said no I've already called it Reggie the Hedgie. D#2 said no that was stupid and it has to be Arthur. Meanwhile the hedghog had quietly waddled off into the undergrowth ..
at July 01, 2010 No comments: