Back in The Dales

My birding developed during my teenage years when I lived in NW Leeds. As my interest developed I became aware that some of those birds in my Hamlyn Field Guide that I used to spend my evening studying spent the summer not far away. So on 30th May 1978 I made my way to Ilkley and Heber's Ghyll Wood. There I found my first Wood Warblers, immediately entranced by that descending trill and shivering song - what a performance! And that bright yellow throat! I saw three males in total.

Over the years I heard that song in more and more places locally, until the notion of going all the way to Ilkley seemed ridiculous. But time, relocation, and the degradation of the natural environment has led to Wood Warblers becoming much scarcer in The Dales and certainly much scarcer on my list.

The first thing I heard on getting out of the car was that shivering song. I found the bird courtesy of a photographer carefully positioned nearby, and watched this gem for about half an hour. What a great bird. I climbed the path towards the moor - I'd forgotten what a beautiful wood it is - and came across two more singing males. Just the same as 1978. 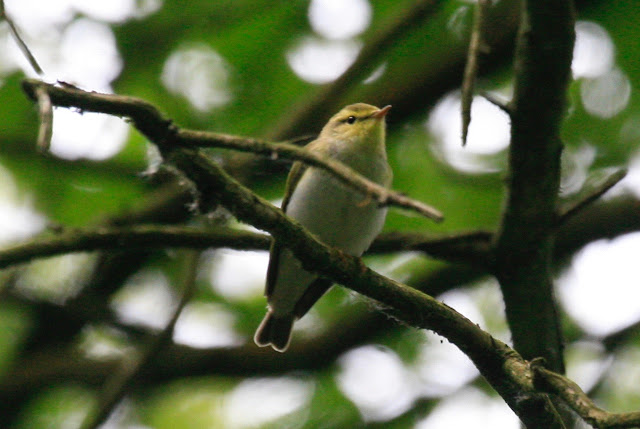 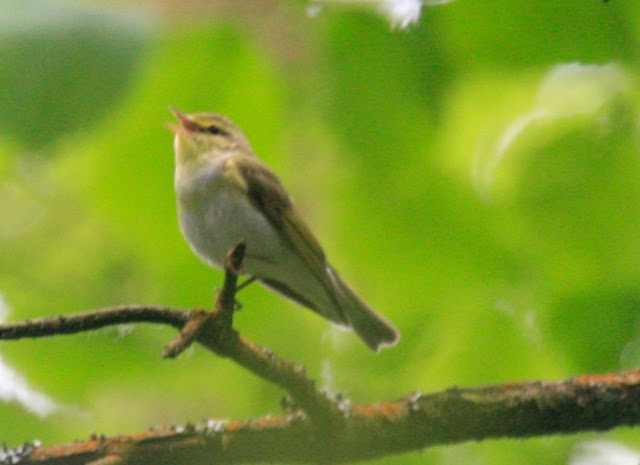 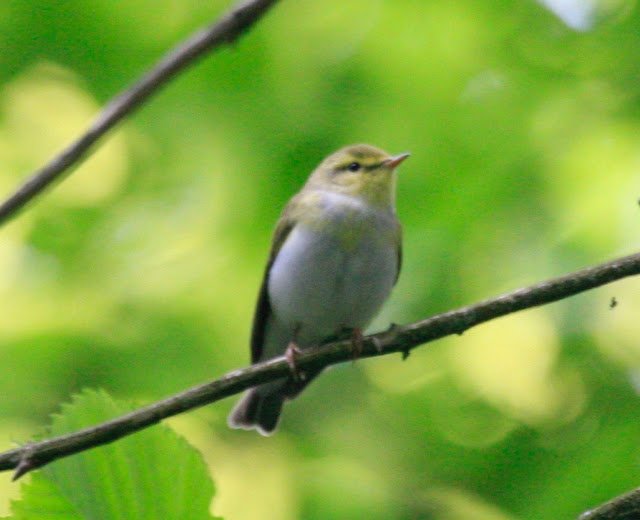 So then up to the moor itself, and again some changes from when I was last here - mainly for the better. Plentiful Meadow Pipits, Willow Warblers, Two pairs of Stonechat with singing males, Reed Bunting, and Red Grouse - I didn't think these would be so close to the town.

With the passing of the years my wildlife interest has expanded so I was particularly keen to see Bilberry Bumble Bee Bombus Monticola. Well, there was lots of Bilberry, and lots of a likely looking bee. So I spent a happy half hour snapping my first Bilberry Bees, although I did think that the raspberry-tail was meant to cover over half the abdomen? Needless to say, when I got back and checked, I'd spent my half hour snapping Early Bumble Bees. Well, I suppose we learn one mistake at a time, and I will at some time get to enjoy the thrill of seeing my first Bilberry Bees all over again!

Then finishing the day at the usual place - Strid Woods. The weather was closing in - one thing that hasn't changed in Yorkshire - so just a few Pied Flycatchers, Redstart only heard, Spotted Flycatchers, Nuthatch, Common Sandpiper, Siskin, Oystercatcher, Redshank. The usual. 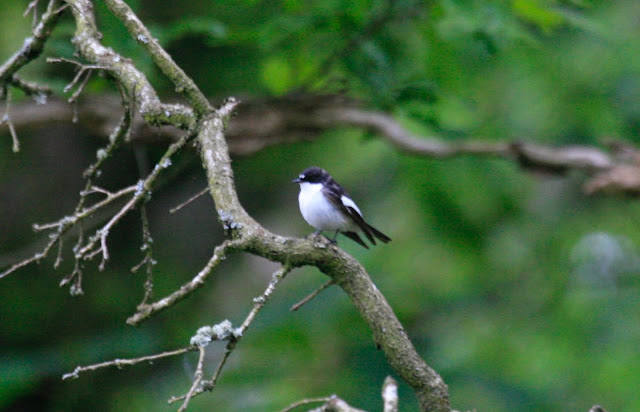 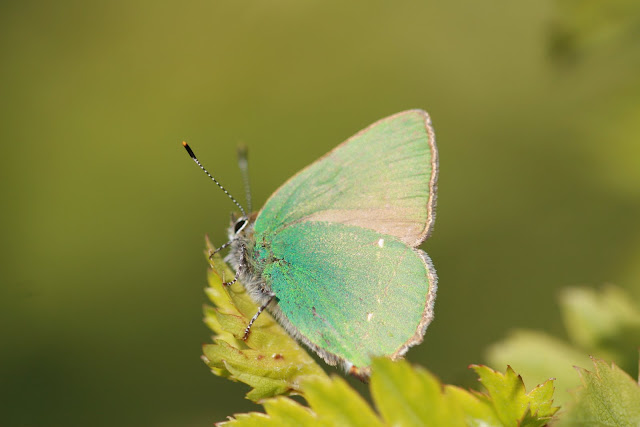 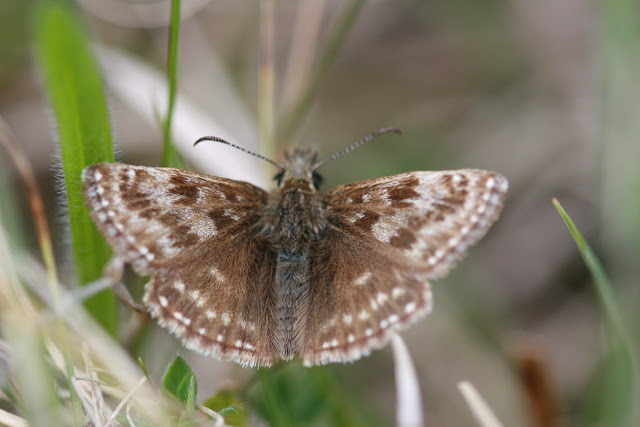 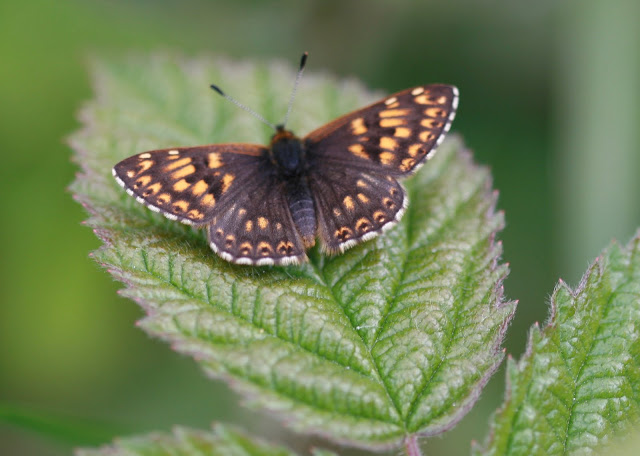 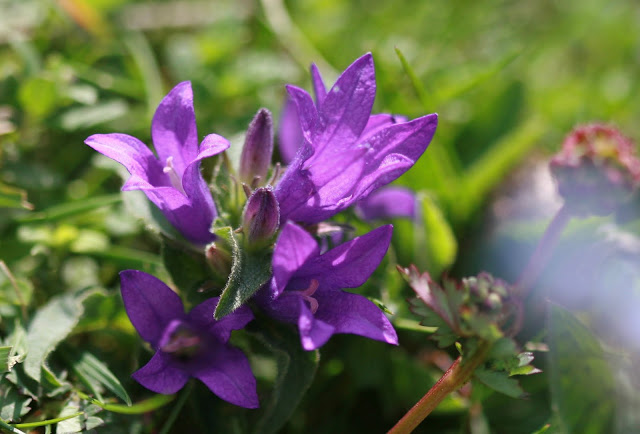 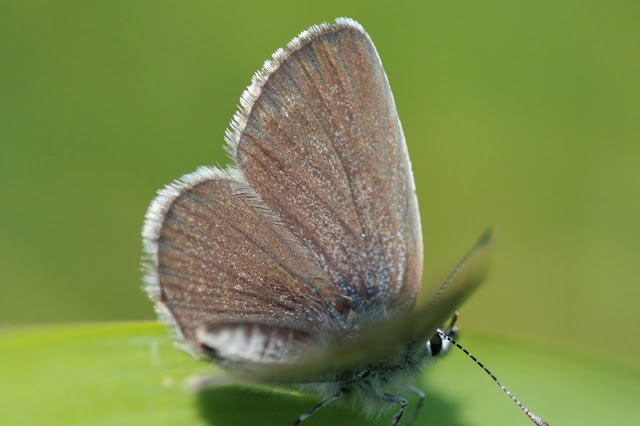 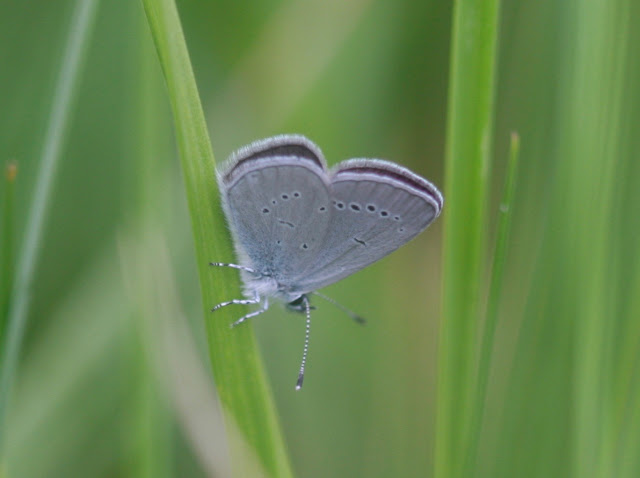 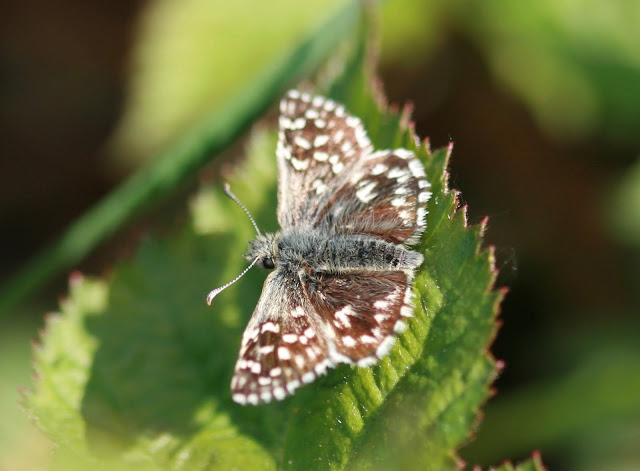 Email ThisBlogThis!Share to TwitterShare to FacebookShare to Pinterest
Labels: Butterflies

Firstly, and most obviously, top wildlife. Minsmere has this. It gets rare stuff (I've seen the Purple Chicken, Citrine Wagtail, and Semi-Palmated Sandpiper in recent years), but also has a variety and quantity of nature that means even when there is 'nothing here' there is still lots to see.

Secondly, you need to be able to see it. Minsmere has a network of walks and hides that means just about everything is accessible to the public.

Thirdly, you need knowledgeable and enthusiastic staff. Minsmere has a number of people who fit this bill. From roving wardens in the hides to staff in the centre there is all the information and guidance you need to get the most out of the day.

I was meeting up with a friend who has an interest in wildlife so Minsmere was a suitable place. the day got off to a good start with a Little Owl perched on a sign post just off the A12, and then on the access road (taking care park by the watchpoint and not on the road as it is a criminal offence to do this on this stretch and cameras are positioned), 2 Stone Curlew and a small herd of 8 Red Deer.

Garden Warbler singing by the car park, then to the centre. Savis Warbler singing from the bushes left/opposite Island Mere hide. Little Terns on the south scrape. Friend arrived so we set off for Island Mere, and had the bird singing easy enough. And then eventually the bird itself in a bush exactly here the staff said it would be, distant but clearly a darkish locustella.

Then round the scrapes. Little Gull, several Little Terns, a few Knot, 2 Whimbrel flew off calling from south scrape. along the beach two Stonechat in gorse, so we looked for accomplices and found a pair of Dartford Warblers once again showing very well.

At this stage we looked inland and saw from our lofty sunlit point a thunderous (literally) dark grey cloud with a mass of swifts, martins and gulls feeding frantically in front. We thought we saw a couple of hobbies too. The clouds appeared to be getting nearer so we headed to the centre for a coffee, and as we were there the heavens opened.

Finally, friend having departed, the centre staff said a few hobbies had been sent from Bittern Hide, so a quick pre-departure visit and there were not just three hobbies hunting over the reed bed, but a Bittern sat just on the edge of the reeds.

Once again an excellent visit. Non-stop wildlife spectacle. Must be the best place in England for wildlife.
at May 16, 2019 No comments:

Email ThisBlogThis!Share to TwitterShare to FacebookShare to Pinterest
Labels: Minsmere

Mike and Dave were in the car by not long after seven, and the Last of the Summer Wine Year-Listing trip to Norfolk was on.

We pitched up at Wells around 9;30ish and parked in a lay-by opposite the holiday camp just beyond the railway and walked down to a likely-looking wetland. We soon found the Wood Sandpipers (168), as always the epitome of avian elegance, People soon started to arrive and a couple pointed out  Whinchat (169), freshly arrived and working their way along a fence. Lesser Whitethroat - the first of many - sang, Swallows swopped around, and distantly a Spoonbill (170) flew east although David failed to pick this one up. also lots of Avocets and a Wigeon.

Then on to Burnham Overy for the Purple Heron. As we were walking down to the crowd all looking determinedly into the marsh, David interrupted a long spiel about how he doesn't seem to pick up or see birds these days to point out a Bittern (171) on a reed. We duly watched this for a while until it flew off and dropped into the reeds. We arrived at the crowd to find them annoyingly and frustratingly blasé about the Purple Heron. Yes over there somewhere, been showing well, not showing at the moment, will no doubt be out soon. We scanned for a while, got distracted by a couple of Spoonbills very distantly circling, two Marsh Harriers and a Red Kite, and then it was out (172). Literally it climbed out of the ditch and wandered around. What a bird, even at a couple of hundred yards. All neck, and an enormous bill. Check out the photo at the top - yes its in there. David said it was like an Anhinga, and it was.

Duly relaxed we started looking around and had 3 Whimbrels in a field, a Little Egret and a Great White Egret, a Grey Heron making 6 heron species including the Spoonbills. The mewing/cawing of Mediterranean Gulls drew our attention, and then on the way out a pair of Grey Partridges (173). We bumped into some birders determinedly heading down to the Heron. Was it around?  Yes. Over there somewhere, been showing well, not showing at the moment, will no doubt be out soon.

On to Titchwell for some lunch. Mike thought he heard Turtle Dove purring briefly round the car park. We went on to the reserve proper - a few Bearded Tits, lots more Avocets, a few (hundred) Brent Geese still, a single Little Ringed Plover, another Whimbrel, 19 Blackwits, a couple of Grey Plovers, a few Barwits and Sanderling on the beach and then on the Tidal Pool two feeding Spoonbills and nine Turnstone. Med Gulls everywhere, calling all the time. We walked through the fen trail and got our first dragon of the year - a single Large Red Damselfly, then 3 male Red Crested Pochard (174) in very fine plumage pursuing a single female, and another Lesser Whitethroat flying around, Mike thought he herd that Dove again,  and then in the centre someone saying they'd had Turtle Dove walking round the car park at 6am.

To finish, Snettisham. We parked at the beach car park and walked north toward Heacham. My first trip to this open scrub and reed habitat - impressive. There were lots of warblers, many Whitethroat and several Lesser Whitethroat including one doing a song flight - we had no idea this species did this. A coupe of Willow Warblers and a Sedge Warbler. Also my first Speckled Wood and Small Copper of the year. Then Mike found a single female Wheatear, and a pair of Stonechats clearly feeding young. We got to the end, scanned the field north - there more Whimbrel and two more Grey Partridge, then walked back along the dyke - hunting Marsh Harrier being harried by Lapwings and a Red Kite, another Spoonbill, our sixth for the day at four sites, and two more Whimbrel bring the total to 9. Finally another pair of Grey Partridge and we were done for the day, heading back home via our regular stop at Sainsbury's cafe in King's Lynn to go through the list.

Final total just over 90. Another splendid day in Norfolk - good weather, great birds, great company.
at May 02, 2019 No comments: