A couple of walks out the door between deluges. Some sizeable mixed flocks of warblers, tits, and finches around at the moment. Highlights:

25th - 2 Bullfinch at least with one very chatty juv. Lesser Whitethroat, lots of Whitethroats and Blackcaps, Willow Warblers including 1 singing, Spotted Flycatcher, First Skylark of the autumn flushed from a field, Nuthatch heard from the park.

27th - A Hobby at last! Spectacular views of one with prey in its feet. As often with this species, the House Martins alerted me to its presence. Whinchat 1 in the same place as lat Octobers Stonechat (just up from Feakes Lock). A few Willow Warblers, c30 Linnet, 3 Common Buzzard.

A trip to Hanningfield Res in the rain. I had a hunch the rain might deliver some black terns, but no. There were some decent waders (3 Green Sandpiper, 3 Greenshank, 8 Common Sandpiper, 2 Ruff, 2 Ringed Plover, 1 Knot, 1 Blackwit), and lots of hirundines (100+ Swallow, 30+ House Martin, 1 Sand Martin, + 4 Swift) low over the reservoir.

At one point I noticed a flock of swallows heading over a wood. When I checked back on the res there was not a single hirundine. Where there had been swallows and martins swarming over the surface there was now just open water. The reason became clear when a falcon appeared. Dark blue, with something in its claws. It disappeared behind some bushes and came out the other side going like a train low over the ground. A moment of falcon magic as it tore up the water's edge.

I had thought Hobby but why would a hobby charge up the ground? Peregrine occur here so I guess this was it, and the reason why every hirundine scarpered.
at August 24, 2015 No comments:

Email ThisBlogThis!Share to TwitterShare to FacebookShare to Pinterest
Labels: Hanningfield

The usual figure of 8 circuit round South Sawbo, in warm afternoon sunshine after the deluges of the last couple of days. The last weeks of summer are ebbing away. Head-high vegetation all over the uncultivated areas, fields all cut or ploughed. Birds were scarce, again preumably quietly stoking up carbs for winter or migration.

After spectacular beginnnings in 2007-8, SLRS has settled into a pattern as an overgrown shallow pond. There is generally too much vegetation for waders to be happy, and the main bird interest is winter wildfowl. Today, however, there was water over half the pond, and a Green Sandpiper was warily picking its way along the edge.The first for the year for what was a regular species at this spot.

I took a shortcut across the field and in so doing stumbled across a whole series of ants nests. I accidentally stumbled into one taking a side out, exposing a mass of grubs.I think these are black ants but honestly have no expertise in this area. 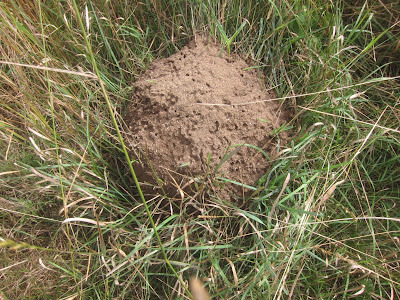 other noteable birds were c30 Linnet, 2 Yellowhammer, juvenile Green Woodpecker, and 2 Common Buzzards. As is usual a few frustrations - distant circling birds may have been hobbies but I made the cardinbal mistake of taking my eyes off them and then being unable to find them again not once but twice, and a sharp call from a bean field may have been a Yellow Wagtail which would have been a first for this area this year. Finally a shrill series of calls was, courtesy of Xeno-Canto, probably a juvenile Sparrowhawk.

Finally a couple of Commas confirmed that the butterfly I saw last week was not one of these. 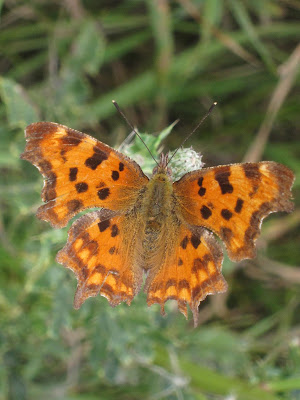 A dash out in the rain yesterday to twitch Little Stint at Amwell. I took a photo. I'm working on getting the Panasonic P60 to take decent shots down a Kowa 883. Measurements have been taken, emails have been sent. Fingers crossed you will not have to suffer many more of these. 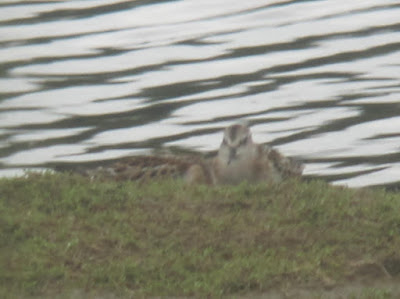 the extra time has paid dividends. Not just in more time in the field, but a more relaxed approach, more time to stop and observe, not just tick and move on.

In reverse order ... I returned to the house after a walk in Pishiobury Park to find this on the buddleia 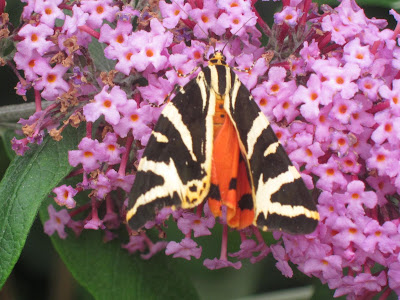 Its a Jersey Tiger, which I believe is spreading out of its South London stronghold, and with a 2011 record for Herts being the first for a while this is still a good find, but should be less scarce in a few years.

I had just returned from a leisurely stroll round Pishiobury Park. It was hot, mid afternoon, and windy, so anything with wings was staying put. It was a day of missed opportunities; a large orange butterfly shot past, too big for a comma. Silver Washed Fritillary? I hung round to try for another glimpse, but it had gone. And then a falcon between the trees. Small, direct, surely a Hobby? But it moved on out of site without a clinching view.

The definate items were predictable. Butterflies - a large number (18) of large whites, a small number (1) of small coppers, 4 "blues", Ringlet, many Gatekeepers, some Speckled Woods and a Red Admiral. There were some bees, a surprising number of queens - what are they doing out now? 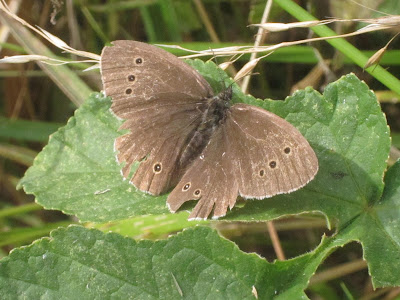 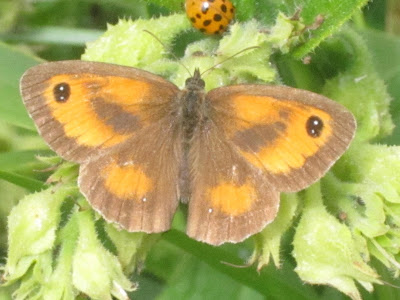 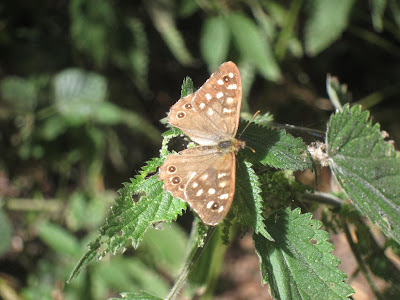 Magpie was the commonest bird, but there was a Willow Chiff, two Kestrels, and three Common Buzzards talon grappling.There was also these, doing what they do best.

Earlier in the morning I had popped into Pincey Brook on my way top Stortford. Back in the spring there was some decent mud, and I had birds such as Wood Sandpiper, 200 Golden Plover, Shelduck, and Little Egret, quite an impressive list for a flooded inland brook. My heart sank when I saw the field was heavily flooded and the mud gone, but I my worries disappeared when a Creamcrown (prob juv) Marsh Harrier rose from the flood and quartered the area, even diving toward the ground at one stage. A Red Kite appeared and the Harrier flew off toward a neighbouring field, but in its brief time airborne it had put up c50 Lapwing, 2 Teal, and caused some consternation amongst the c40 Greylag Geese.

Yesterday was Rye Meads, an RSPB that has benefited from some recent effort to atrract intersting birds. There were 2 Green Sandpipers at thge Draper Hide, and at the Gadwall Hide a local had identified a juvenile Meditrerranean Gull amongst the 50-100 Black Headed Gulls. He offered to direct me but I took the challenge and ended up finding 2. Here is a very poor shot of one of them. It's the one on the right. Clearly. 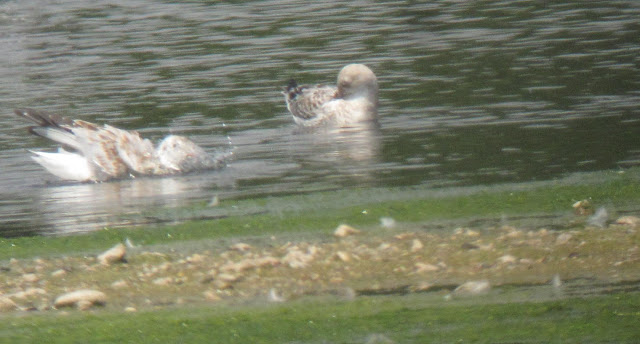