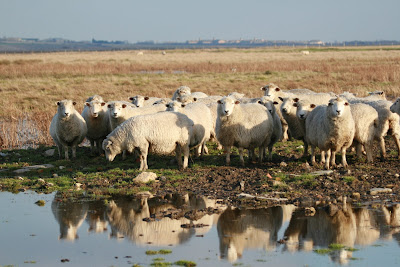 This time last year Kevin, Steve and myself spent a day watching raptors on Sheppey. We enjoyed it so much we decided to do it again this year. On Tuesday 27, we revisited, hoping to break last year’s records of 65 species and 8 species of birds of prey, but given the dismal weather forecast and last year’s luck thought we’d do well to match it.

The SE part of the island of Sheppey is mile after mile of wet farmland. It attracts huge numbers of waders and wildfowl, and numbers of raptors to prey on them, making it possibly the best place in Britain to see raptors. We started and finished at the Capel Fleet View Point, a raised platform from which the whole of the central plain can be seen. In between we parked at Harty Church and walked down to the Swale National Nature Reserve – a piece of marsh just over the sea wall from the saltmarsh and estuary, and stopped for lunch at the excellent Ferry Inn. We also went to the Elmley RSPB reserve – a mistake as its closed on Tuesday, but we thought the road may turn up some Short-Eared Owls.

Well, what a glorious day it turned out to be. Bright sunshine, warm in the sun, and 70 species with 9 birds of prey. It started as soon as we got out of the car with an adult Mediterranean Gull next to the watchpoint, then scanning westward towards the prison we had a Rough-Legged Buzzard in flight, looking slightly bigger and bulkier than adjacent Common Buzzards, and then found one sat in a bush at a distance of around half a mile. With the scope on max we could clearly see a white streaked head, and as it balanced in a bush we saw the all white tail with a clear thick black terminal band. Steve had a Merlin amongst the Fieldfares – our only Merlin sight of the day, although we did have a lot of candidates on posts and on bushes that all turned out to be Kestrels – and as we left the site a Ringtail Hen Harrier flew across the road. At the Swale reserve we had the Hooded Crow amongst 70 odd Carrion Crows, Reed Buntings galore, and Curlews, Wigeon, and Brent Goose on the freshwater marsh, and out on the estuary 30 Avocet, a mass of Grey Plover, Bar-Tailed Godwit, Dunlin, and a single Black-Tailed Godwit flew in.

At Harty Ferry a ringtail Hen-Harrier floated by – how often does that happen when you’re sat outside a pub having lunch? The trip to Elmley added Little Egret and Gadwall to the list, and a Green Woodpecker by the roadside at Eastchurch produced load cheers as we broke the previous year’s record. Finally back at the watch point it was raptor bedlam – they were everywhere. A Short Eared-Owl was patrolling along the nearby dyke, but we didn’t have time to look at that as two Peregrines were in the flat field by the watchpoint, and in the sloping field behind there was two Barn Owls and a Hen Harrier. There were silly numbers of Marsh Harriers – 6 sat in a field, 3 fighting over the marsh, etc. It was fantastic stuff – we were grinning from ear to ear as bird after bird performed in full scope view. In between we heard Cetti’s Warbler, and saw a flock of 20 Corn Buntings, and good numbers of Stonechats. A deafening Pheasant chorus as the light deteriorated signalled time to go.

70 species – a stiff target for next year. Clearly RLB will be no trouble, but does anyone know a site for Great Tit and Song Thrush? 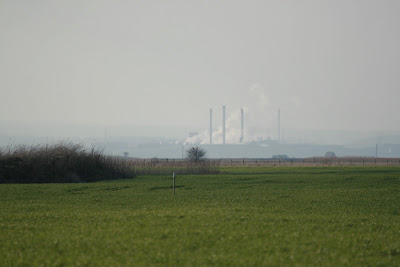 Looking SW - is that an RLB in the bush? 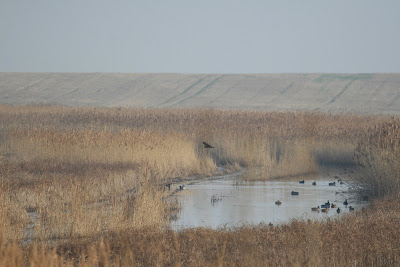 E from the watch point. 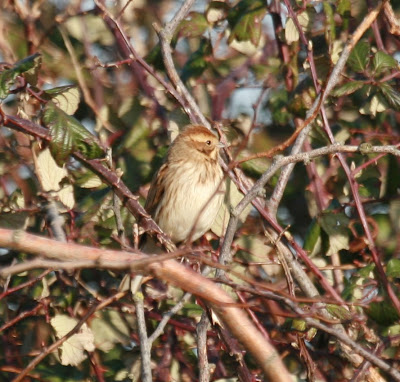 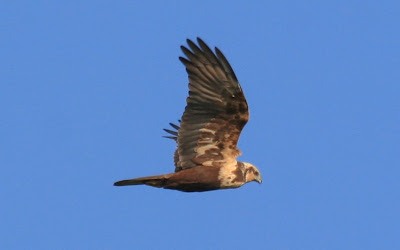 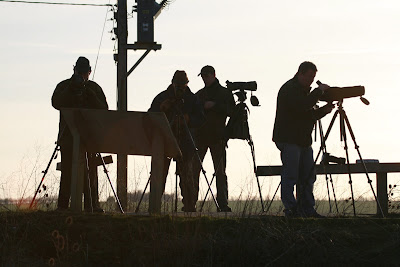 A Tale of Three Roosts

Roost One. I went to Sawbridgeworth Marsh on Saturday where Mike was already present. Its been quiet recently, and today was no different, but we had some good variety. A couple of Sparrowhawks, a Common Buzzard, more Fieldfares than of late - there seems to have been an influx - a good number of Stock Doves, and the usual Woodpeckers, Corvids, and Buntings.

Roost Two. D#4 had a bowling party in Bishops Stortford on Sunday, so whilst he was there myself and D#1, D#2 went round Hatfield Forest Lake. there were three Pochard, and small numbers of Gadwall, Shoveler, Mallard, Teal, and Tufted Duck. Finaly, we caught up with Graeme's Tawny Owl. Graeme found one last winter at the North end of the lake, and its taken to roosting there during the day again this winter. Its a while since I've seen one in daylight, and its rich reddish brown feathers stood out well. 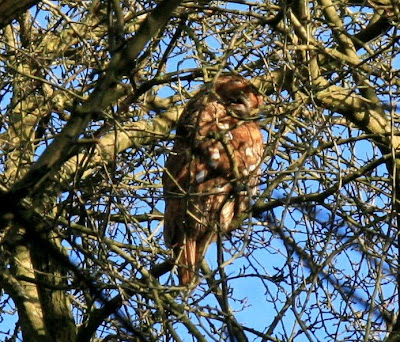 Roost Three. This blog will be going back to its winter roost for a few weeks while the short daylight hours and family stuff squeeze out birding trips. Fingers crossed there may be the odd day-trip or visit to Weymouth, in which case I'll post.
at January 18, 2009 No comments: 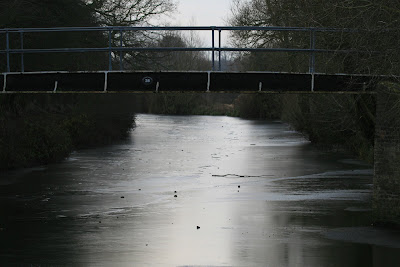 Took my first walk of the year round SLRS and South Sawbridgeworth today. The scrape and much of the river were frozen solid, and the ground was frozen underfoot too. I got the impression the birds are suffering. there were no large flocks of any birds; I saw two flocks of Long-tailed tits but they mustered only 7 birds between them, and the flock of 50 mixed buntings and finches at Feakes Lock pre-Christmas has shrunk to a handful of birds. The only large total was a record number of Cormorants (10) which I assume is because they are having trouble finding open water elsewhere. 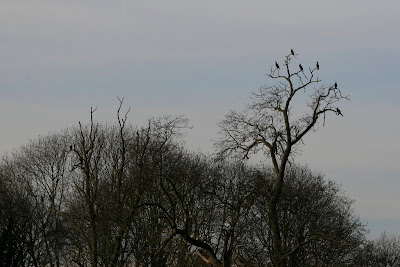 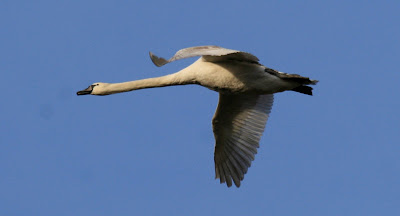 The full total, for posterity.

A Great Grey Shrike has turned up in Cuffley. Its half an hour away, so with D#4's football being cancelled due to a frozen pitch I sneaked off to see it.

As this was the first Saturday it was available the twitch was well attended. The bird has taken up residence in some bushes and trees round the railway embankment, and didn't show particularly well when I was there. Nevertheless we got some reasonable views, and had the usual pleasant birding chat with the assembled locals.

It was too far away for a photo, unlike a Little Owl on my way back. One flew into a tree at High Wych as I was driving past, so I quickly pulled in to the school entrance opposite, grabbed the camera and clicked away. I crossed the road to get closer but it disappeared. The habitat is ideal for Little Owl, so I may be back to look again at a later date. 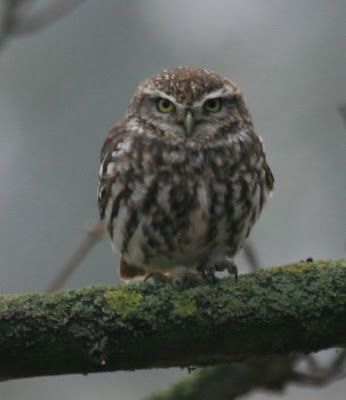 At last some local waxwings, hiding amongst the packed housing estates of Bishop's Stortford. I got the e-mail with directions and immediately left. The 10 birds were being flighty and difficult, and eventually flew off just as Tony arrived. Fingers crossed they will be re-found later.

Returned pm when they were happier to feed on the white Rowan berries - got a few more shots from the van, although on occasion the birds were too close! 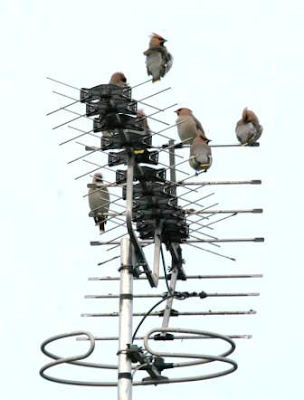 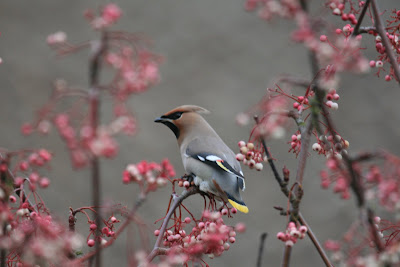 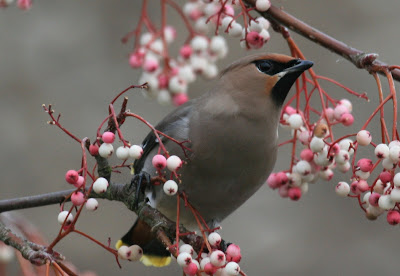 Went to Amwell first thing this morning. Freezing cold, and mainly ice-bound with just a few open spots all crammed with wildlife.

I thought I had a male Scaup, but something wasn’t quite right; mainly the bloke next to me saying that a hybrid had been seen in the area recently. It didn’t have that “Pochard in Tufted Clothing” appearance, and the head seemed to have an abruptness at the back of the crown. Further correspondence on the Herts Yahoo group suggested a Tufted/Pochard cross that had a Lesser Scaup appearance. That fitted, so not even a bit if Scaup in it. Just Scaupish.

I always feel slightly sick with envy walking round Amwell. Lots of really good habitat of all kinds. Over in the Stort Valley we don’t have anything like the range and variety of habitat, particularly the amount of open water. There was lots of quite good stuff. Numbers of dabbling duck, a Red-Crested Pochard, several Goldeneye, a Water Rail out in the open, a Stonechat, a Kingfisher, a party of Siskin, and even a Fox out on the ice. The site speciality - Smew - was missing.

But today Hatfield Forest Lake was the place to be for the diligent few (so not me); two Bewick’s Swans turned up. Photos are on the Stort Valley Wild site, and we await the results of the inquiry on the rings on the legs.
at January 04, 2009 No comments:

I ventured deeep into enemy territory today, drifting incognito amongst The Gentleman Birders of Essex.

Star birds were the two Penduline Tits. If only all birds were as confiding as these two. They moved around the north part of the reserve, but were happy to feed in the open in front of massed ranks of birders. A lifer for me, I was expecting something like a masked Bearded tit, but they were more Great Tit or finch like in general shape and demeanour to my eyes. Here's the best I could do with the hand-held lens plus converter. 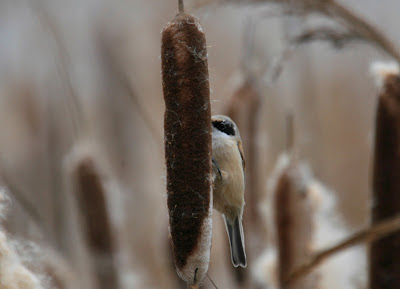 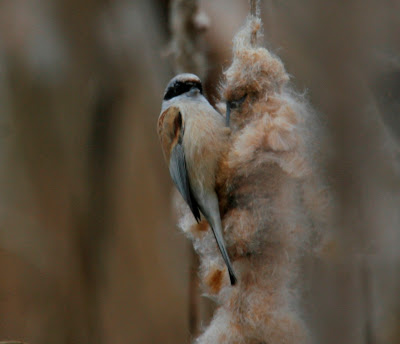 Otherwise I underperformed against the list in the centre;no SEO, Peregrine or Water Pipit, and the Serin hadn't been seen when I left. Nevertheless, in the Reeds there were Chiffchaff, Goldcrest, calling Cetti's Warbler and Water Rail, and a Kingfisher. On Aveley Lagoon there was about 20 Pintail, a Golden Plover, a Snipe, and lots of Lapwing, Wigeon, Gadwall and Shoveler.

On the marsh were Reed Bunting, 4 pairs of Stonechat, Meadow Pipits and Pied Wagtail, and on the foreshore were 3 Black-Tailed Godwits, about 10 Redshank, some Dunlin, Teal, Shelduck, and some dabbling ducks from the reserve. Around the centre were Goldfinch in number and various other typical garden birds. so a good start to 2009. 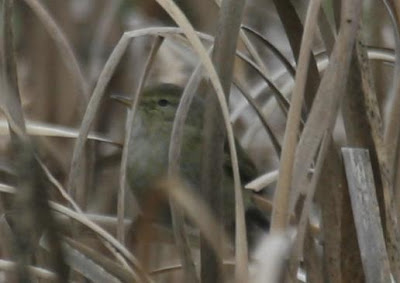 There's lots of work still going on out on the reserve. Much of it to do with chldren and education, but no doubt some of it will produce more good birds. 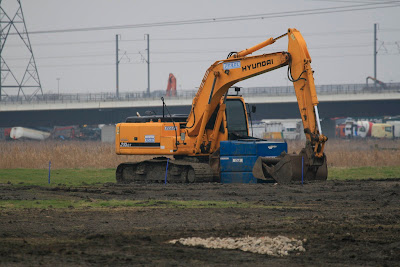