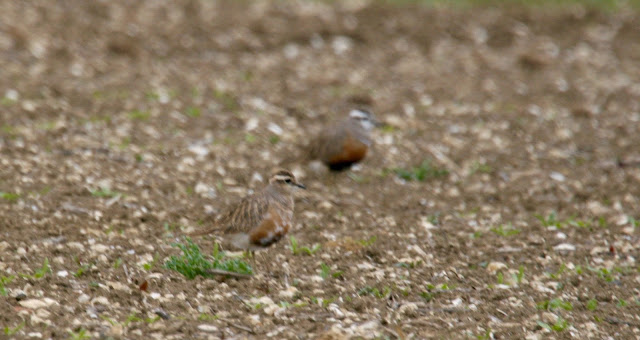 I had arranged to go to Norfolk with David, but with northerly winds bringing rain and hail to the coast and nothing of particular note being reported there was only one realistic option on the table; Dotterel at Therfield. We spent over an hour with these gorgeous birds - 2 males, 2 females, which came quite close in the end. as always my excellent photography skills suffered due to unavoidable issues such as heat haze and poor light, but hopefully this gives a flavour. A pleasure to bump into some birders from Wolverhampton too.

Otherwise a female Wheatear and local finches and Yellowhammers.

Here's a few of the female: 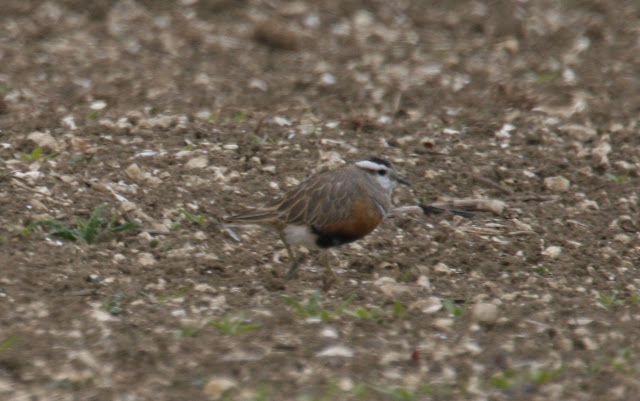 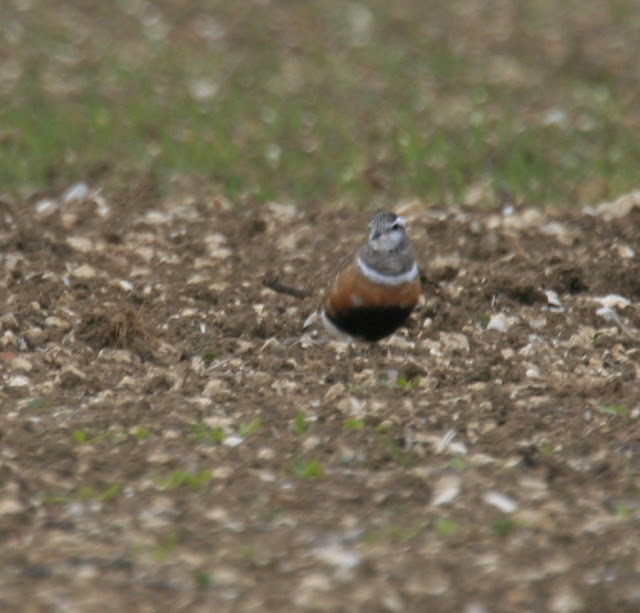 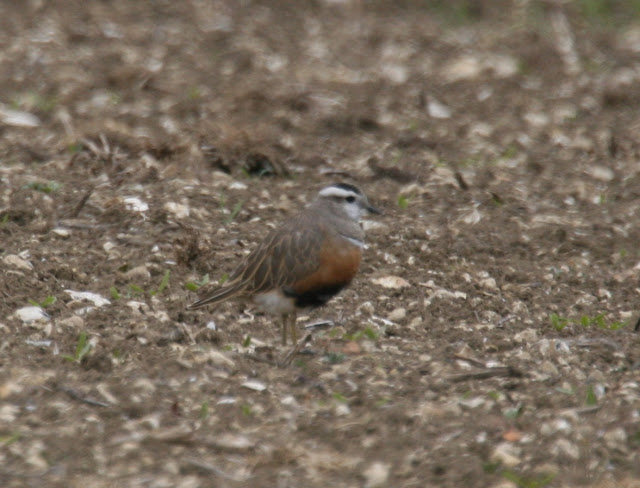 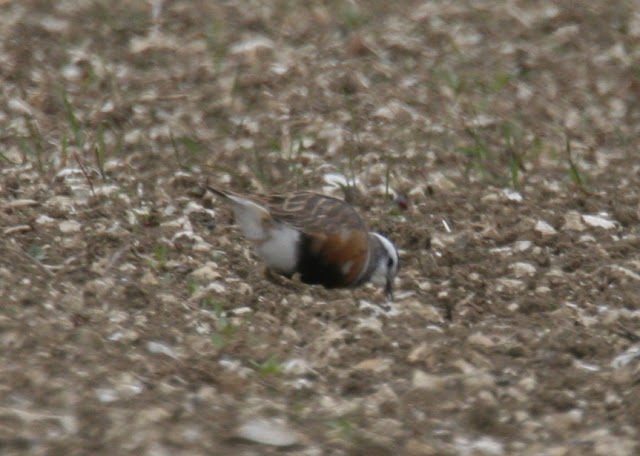 nice to get a good look at the males too today. 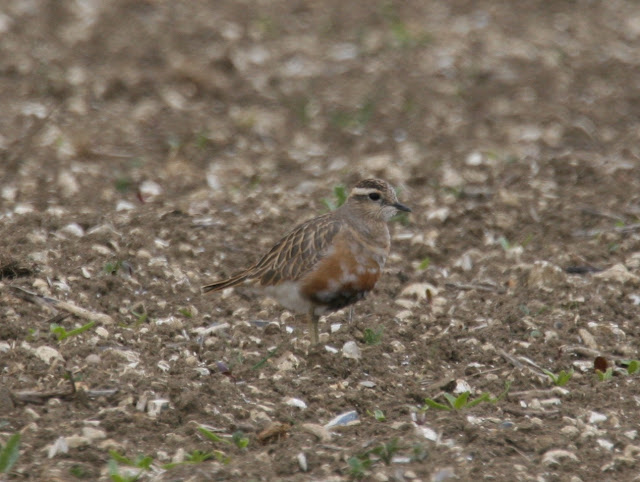 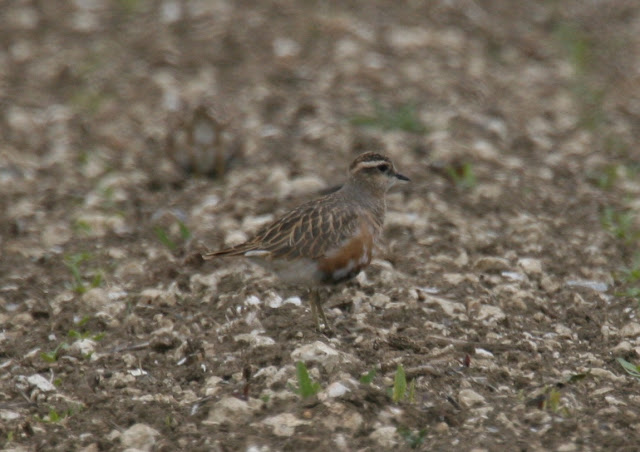 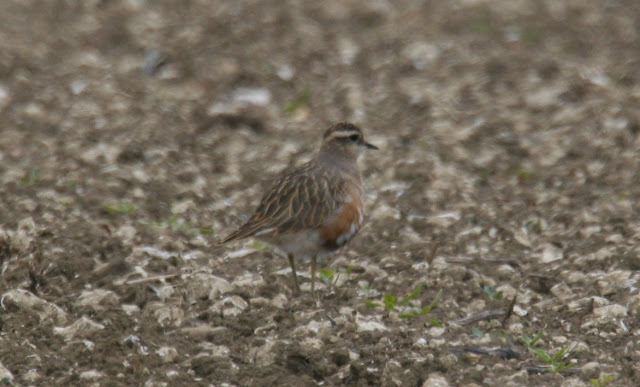 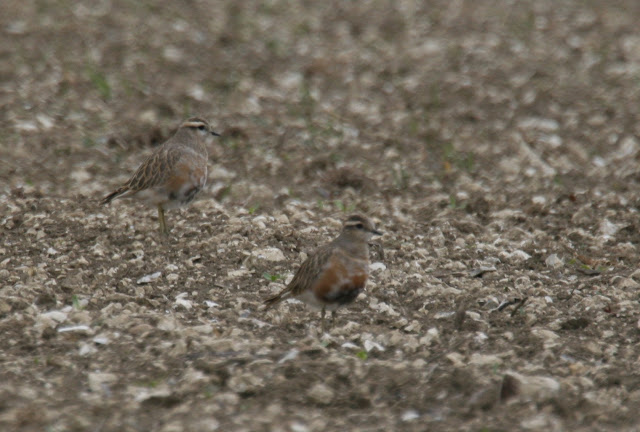 Email ThisBlogThis!Share to TwitterShare to FacebookShare to Pinterest
Labels: Dotterel

Birdguides had one last night so I dropped in this morning to see if it was still there. And there it was, a stunning bird. Surely even someone of my limited photographic skills couldn't cock this one up... 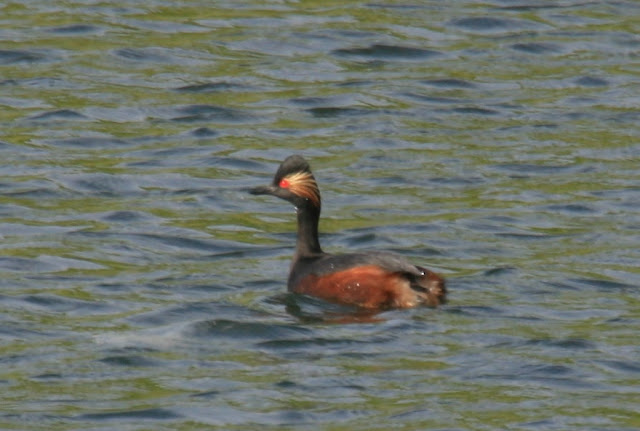 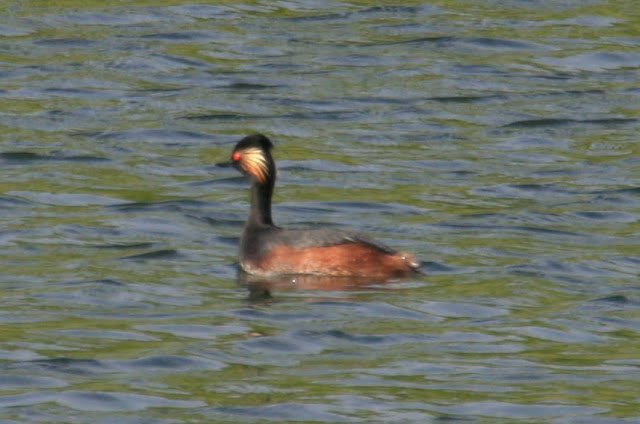 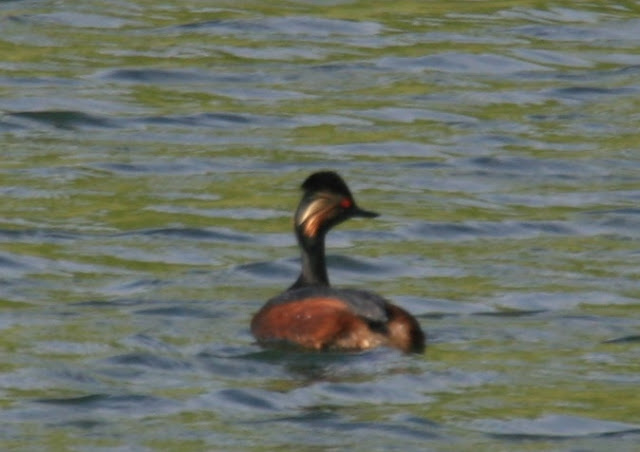 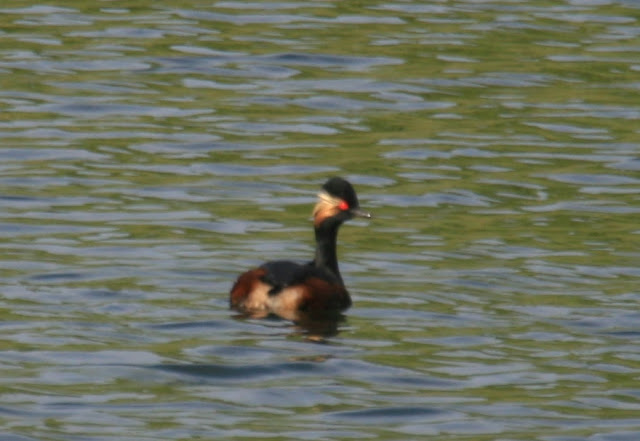 Email ThisBlogThis!Share to TwitterShare to FacebookShare to Pinterest
Labels: Stansted

With spring migrants now being seen all over the place I headed for the high ground west of Sawbridgeworth. A beautiful sunny day which meant I seemed to be on the wrong side of a lot of birds for photography

It was a quiet start with not much of note until I hit the big open field near Shingle Hall Farm. There was 10+ Yellowhammers in the bush by the chaff dump, and a pair of Red-Legged Partridges flew up. Then on the old airfield perimeter a male Wheatear. I spent a good half hour trying to get a decent photo, but distance and my continuing crapness with a camera resulted in these apologies for photos. 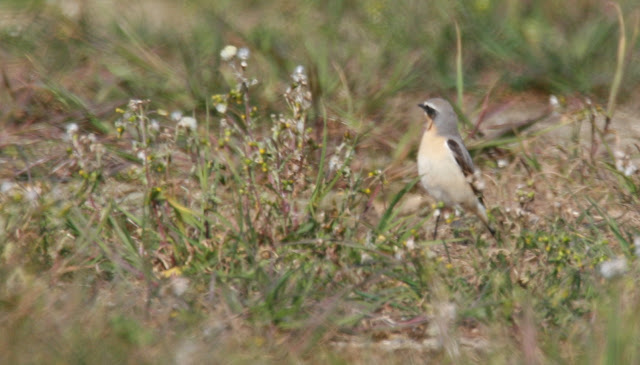 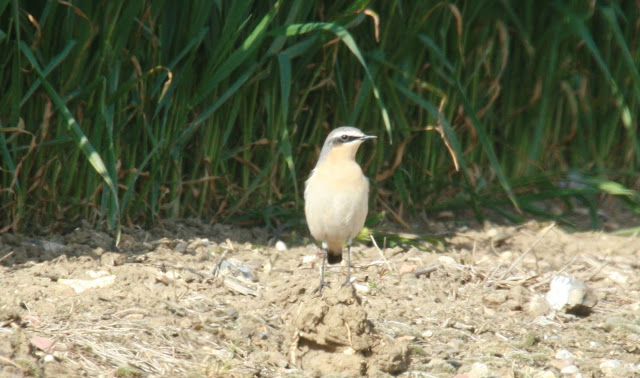 Walking a little further and I got to the top of a field by local farm Tharbies.  A Red Kite flew over, a couple of Grey Partridge flew out of the field, and on rounding the end of a hedge I found a small paddock with 4 Wheatears in it. I searched for more but never mind - Four spring Wheatears is a cracking local record.

and that was nearly that. One of the pleasures of going off birding is bumping into people along the way. A highly entertaining and informative encounter with a nature-lover/shooter/photographer today was one-such. Now I know how to shoot a deer so it dies instantly, and how to avoid the possibility of a wounding and a lingering death, as well as some more detail on the local birds of prey.
at April 19, 2017 2 comments:

Goodbye to all that

Way back in 2003, when D#4 was but a small crawling baby, Mrs D's parents moved to Weymouth. Or more precisely, back to Weymouth. We started visiting regularly; there is no better place for small children, and there were grandparents too. I got to sneak off on occasion to birdwatch the local sites with the results you've seen here.

Roll forward 14 years, and things have changed. D#4 is a teenager worried about his trainers and playing computer games with his mates. D#1 has moved into the world of work, and the others don't find a long golden beach the attraction it once was. More significantly, Mrs D's father sadly departed this life a couple of years ago, and Mrs D's mother has moved away. So this weekend Mrs D and I  came down to tidy up some loose ends and close the door on a long and happy chapter.

Birdwise, its been good. Its not been as good as some have had down here, but the reality of birding Portland and Weymouth is that the birds come to those who put the hours in. Lots of stuff comes through for a day or two only, so if you are not down here when it turns up, you miss it. Nevertheless with such a variety of habitats as Portland bill, the top fields, Ferrybridge, Radipole, Lodmoor, Portland Harbour, and the fleet the standard bird list on any one day is really impressive.

I only really got to appreciate the place when I stopped worrying about the rarities. If you worry about the birds you miss it will eat into you in a big way. If you accept that you can't be everywhere all the time, and that wherever you are the birds in front of you are the ones you need to be looking at, then its a great place. Marsh Harriers, Bearded Tits, Water Rails, Peregrines, Auks, Terns, waders, passage migrants, they are all here.

The local birders have all been very welcoming and informative. I've not detected any of the suppression of some places and most are only too happy to tell you what's around and where to see it. Special mention to Martin Cade, warden at Portland Bird Obs. It goes without saying he knows his birds, but he knows most of the other island wildlife too. His generosity of time and explanation and warmth of welcome goes beyond the call of duty. Portland is lucky to have him.

But its time for different places and different birds. I can still come back, obviously, but its a three and a half hour trip so there and back in a day is difficult, and given I can get to just about the whole Norfolk coast and most of the Kent and Sussex coast in 2 hours I can't see why I wouldn't do that instead. And all that time in Weymouth has been time not in other places so I feel it is time for other places to get a visit.

So that's that for a while. Thank you Weymouth and Portland, and time for some new places and new birds.

Weymouth and Portland - the last time?

Last Thursday may have been the last time I go to Portland Bill, the last walk round Lodmoor. And the last visit to Radipole may have already happened. Circumstances, more of which in a later post, mean that coming here again will take a particular effort, and given the effort, it is likely I will spend that effort going somewhere else that I haven't yet been to, or haven't visited in a while.

So, first off, park at Portland Obs, walk on to the patio, and there is Martin Cade with a fantastic male Redstart perched on his closed fist, calm as you like. Always a cracking bird, they really are better at the range of a few feet. A smashing start. A brief sea-watch has two Red-Throated Divers and 3 Common Scoter up-channel, two Wheatears in-off over our heads, and a Willow Warbler singing in the garden. I head off to the bill to get closer to the movement, but there isn't any in the conventional sense, just Gannets, Fulmars, a fly-by Shag, and on the sea small rafts of Guillemots and Razorbills. The Razorbills are the stars of the show, good scope views with the sun shining on them, just spectacular birds in brilliant white and glistening deep blue and not birds you see too often from a land-locked county like Herts. For me, its this kind of birding that makes Portland a special place.

A brief stop at Reap Lane. A scan has a probable Wheatear on a bush, so I set up my scope and go slowly through a large field. A total of 13 Wheatears, some movement in a generally NE direction with a couple of gorgeous males sat briefly on a nearby wire.

Later in the day a walk round Lodmoor. Nothing too much here. There's a warbler singing from the reed bed. Its a sedge/reed, and i'm always rusty when I her them for the first time in spring, but with no chuck-chuck-char-chars and lots of whistling I'm confident its a sedge-warbler. There's some movement in the reeds, and a brief view confirms the uniform brown plumage of my first Reed Warbler of the year. Oh well, back to Xeno-Canto to brush up on my warbler songs.

About half way round I bump into a couple of birders. They ask me if I've seen much. Not really. There's a Dunlin on the pool where you come in, two cream crown Marsh Harriers doing their tumbling flight over the reed bed, up high there are about 20 Swallows and Sand Martins, there's been a Raven flying round the reserve for the last few minutes rolling over a couple of times and groncking away, but that's just flown off, and there have been a couple of Bearded Tits flying around just now. Judging from there crest-fallen look on their faces this is a good list, and indeed it is, a sign of what passes for normal at Lodmoor. They have "only" seen two Wheaters by the mound which I get later along with two-pairs of Oystercatcher.  Back to the car, turn out of the car park and into Weymouth, and that, Lodmoor, is that.
at April 14, 2017 1 comment:

A walk round in the sun. Bird-wise it is fairly quite. Just a Red Kite soaring around a long way up, and a Kestrel a Sparrowhawk and several Buzzards all enjoying the sun and the heat. Closer to the ground there was a male Bullfinch, several singing Blackcaps and Chiffchaffs, a Shoveler and a Little Grebe on the pond, and down at Feakes Lock I could see Little Owl and Grey Wagtail whilst at the same time a Cetti's Warbler sang. Otherwise a male Reed Bunting looking quite spectacular, a Meadow Pipit over, and Green and Great-Spotted Woodpecker so once again a nothing-kind-of-day turns out to have quite decent list.

My first Speckled Wood Butterfly of the year, a number of Orange-tips, a few Small Tortoiseshells and a couple of Peacocks gave a decent butterfly list, and some Buff-tailed Bumblebee queens were flying around. I think I saw my first worker of the year (white/buff-tailed) and there was a Tawny Mining Bee on the hawthorn.

There were a few sites with lots of small piles of fine soil with holes in the middle. Generally these were in bare parts of the field on a slight slope. I watched for a while and saw no creatures come out of these. I wonder if they are Tawny Mining Bee nests that the adults have emerged from so they are no longer using them. Here's a typical one. 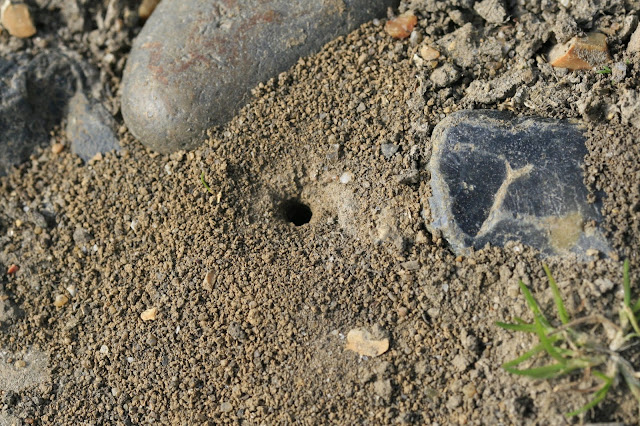