took D#3 and D#4 to Linton Zoo today. Here's a picture of a charming family of South American Tapirs. 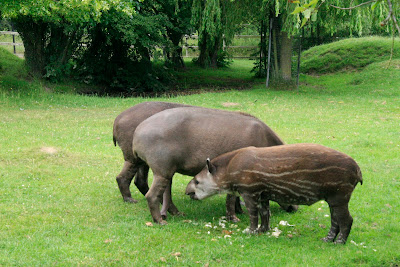 Entries welcome for what the young one on the right is saying.
at June 26, 2009 1 comment:

There's been a Marsh Warbler at Amwell, showing really well. I went over late this afternoon with a firm 5:30 deadline. On arrival a small group was standing idly chatting, and sure enough it hadn't been seen or heard for over an hour.

We all know how this is going to end. But No!! With just 5 minutes to go, there's some wobbling in the thistle bushes, and there it is, out in the open, looking like Marsh Warblers do in the photos, and then its off in the bush with a burst of song weirdness. And I'm heading for home with a lifer.

Is it churlish to complain about that other places get exotic waders and terns, but the Lee Valley's speciality is dull brown Warblers?
at June 21, 2009 10 comments:

My current work is near the Thames, between London Bridge and Tower Bridge. For the most parts the only birds on the Thames are Feral Pigeons, Cormorants, Coots, LBB Gulls and Herring Gulls. Occasionally other birds appear, such as Grey Wagtail, and Mallards and Canada Goose flying up the river. Last week there was a distant falcon I am pretty sure was a Peregrine, and yesterday a pair of Terns, probably Common Terns, belted high up the river.

We get BHG's too. Normally passing by on their way somewhere. We haven't had any for a while until this week when a couple have been around. Post breeding presumably.
at June 19, 2009 No comments:

there's a pair of Baillon's Crake's nesting in the Netherlands. I came across a link to a site with some excellent pictures and this text.

so I did the obvious and put it through BabelFish ...

"All the complete week a paartje smallest moorhen is seen in the green nobleman, Hogenveen, Zuid-Holland. This rare ralletje that spoken normally does not leave itself see it catches to this differently. For the eyes of a lot of bird arse ordinary its pace goes. Really a must."