Just a quick visit to SAL today. I couldn't find Mike's Lesser Emperor today, but as always absence of evidence should not be taken as evidence of absence.

A few shots of the odonata bonanza. First up Red-Veined Darter again. 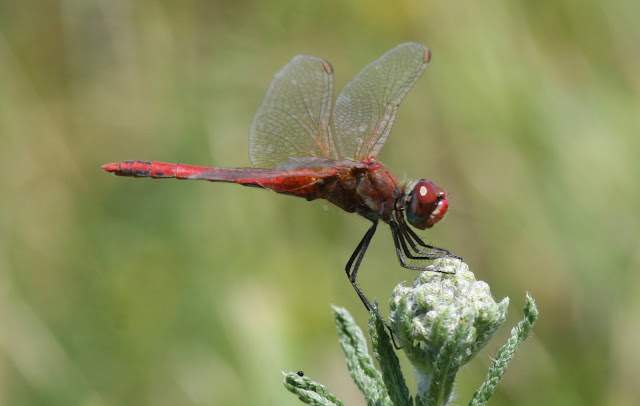 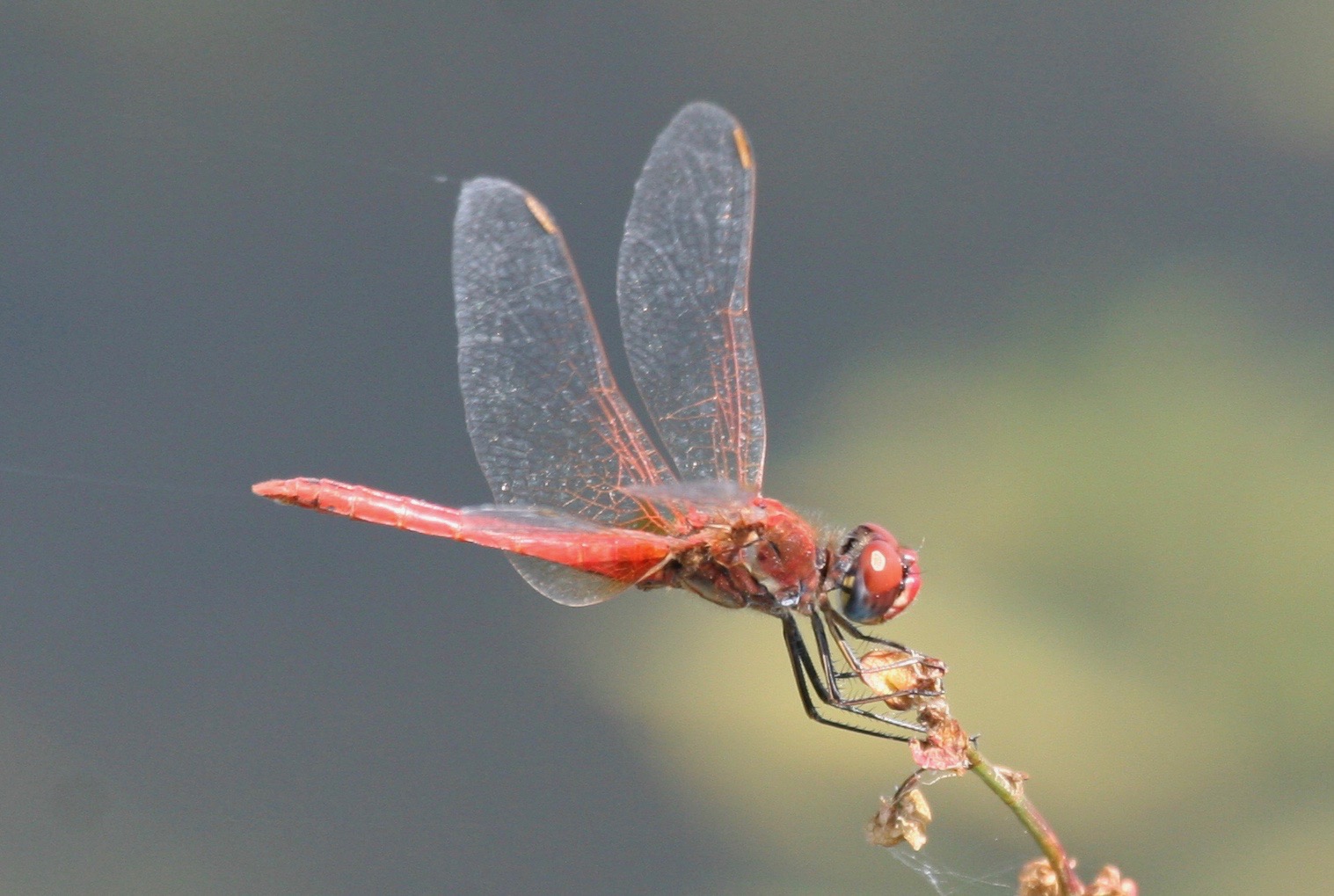 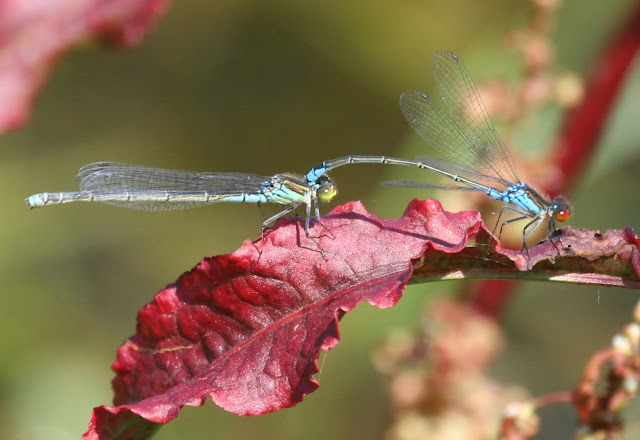 This last pair are Small Red-eyed Damselfly. You can see the 'complete antehumeral stripe' on the female!
at July 23, 2019 No comments:

In search of dragons

A couple of local trips: Firstly to Canvey Island, where we spent time in a ditch. You know the one.

Male Blue-Eyed Hawkers (normally Southern Migrant Hawkers, but I like the new name) were regularly spaced. Mainly in flight, but one did perch up. This is heavily cropped etc etc but those eyes ... 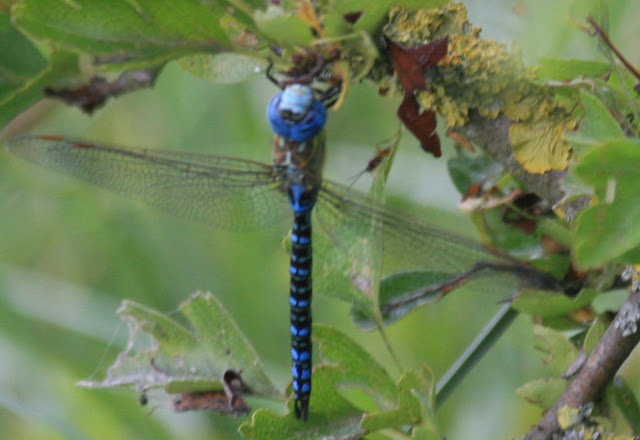 Lots of Scarce Emeralds. Mainly deep in the ditch vegetation but one kindly flew up to be photographed. 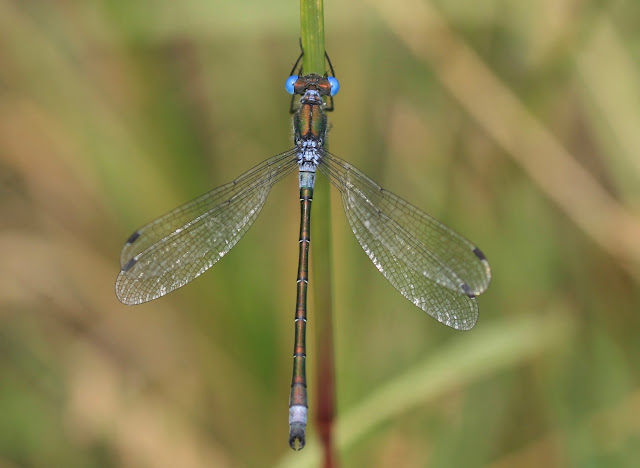 Then onto Hatfield Forest in each of Emperors. I was too late in the day, but a few compensations. Our local White-legged Damselfly population still going. The width of those eyes makes it look like a mini hammer-head shark. 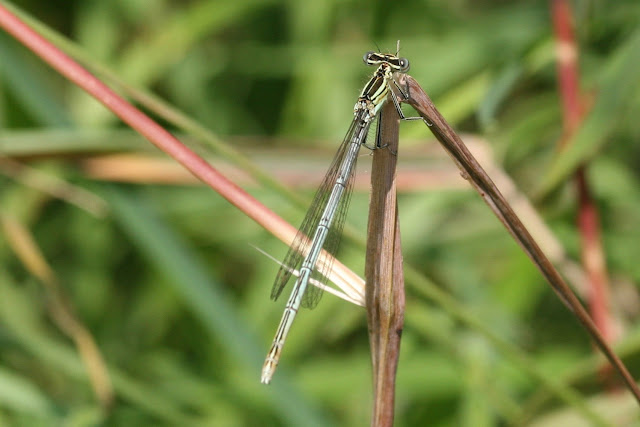 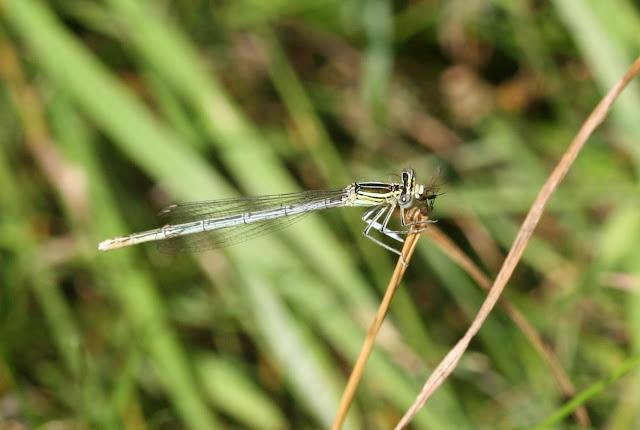 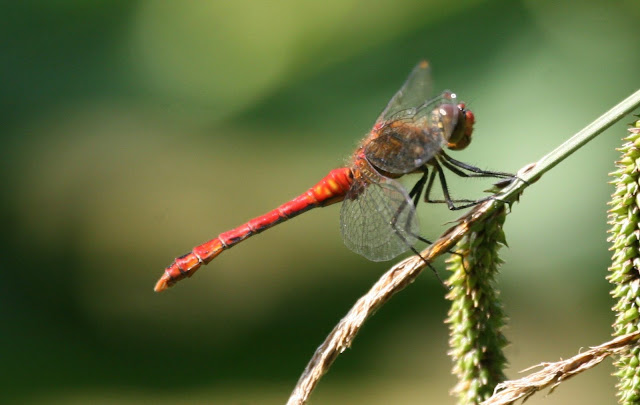 On the trail of the Red-Veined Darter.

With lots of people seeing Red-Veined Darters it seemed to be a good idea to visit Stansted Airport Lagoons, a traditional site for this species in invasion years and a top spot for local odonata, so when Mike gave me a call it was a no brainer to join him to try and find what for me would be a lifer.

We got to the lagoons, now carefully manicured to remove practically all vegetation, and started the search. It was all quiet until we got to the corner out of the wind in the NW when the mayhem started.

Several Emperors, lots of Black-Tailed Skimmer, a few four-Spotted Chasers and two Broad-bodied chasers. Lots off azure/common, a few blue tailed, and a couple of large-red-eyed damselflies, were all whizzing around in the corner, and in the midst of these several bright red darters. We spent a while looking at these, but it was hard. They were territorial on the edge of the water, but were constantly chasing away larger dragons so getting a good view was difficult. One alighted on the grass with better views, but it didn't have much red in the wings - was it a Common Darter? I got a few shots of a few of them, got excited by some reddish on the wings and list fever was beginning to set in. Mike was as always the voice of calmness and sense so we carefully looked for the evidence, but much was dependent on the quality of my photos, taken with a long lens hand-held. Regular readers could be forgiven for having some scepticism as to the outcome at this point.

It was evident as soon as I downloaded them and checked the photos against my new copy of Dijkstra that we had the Darter! here's some photos. they show the key features, a reddish hue at the base of the wings, pale pterostigma, and on a couple a blue colour to the lower eyes. Fantastic! And that bright red colour will remain in my memory for a while.


Overall there were about five darters of red colour of which we are happy with the identification of three as red-veined.

Whilst all this was happening a Banded Demoiselle flew by and we saw a couple of Small Red-Eyed Damselflies on some vegetation. A Common Tern spent some time, and also 15 Lapwings, Tufted Duck, Little Grebe and a family of Greylag Geese. We had several Marbled Whites on the fields, as well as Ringlet , Essex and Small Skipper, Small Heath, Meadow Browns, a couple of feeding huddles of mainly Large whites but also small and green-veined whites, a Small tortoiseshell and as no list is currently complete without a Painted Lady we had one of those, and also two forms of Latticed Heath Moths.

Minsmere in mid summer. No better place to be. Back in the depths of winter we had promised ourselves this trip with a particular purpose in mind, and weather and opportunity was just right so Mike David and I set off on another magical mystery tour.

Arrived just after 11, straight down to the dragonfly pool where we duly got the first few of many Norfolk Hawkers, a couple of early Willow Emeralds, and Broad Bodied and Four-Spotted Chasers. Then on to digger alley, and Bee Wolfs and Pantaloon Bees. I assume these are not particularly scarce, and I know digger wasps occur in all sorts of paces, but the good folk of the RSPB have got information boards here so it makes appreciating the creatures so much easier. 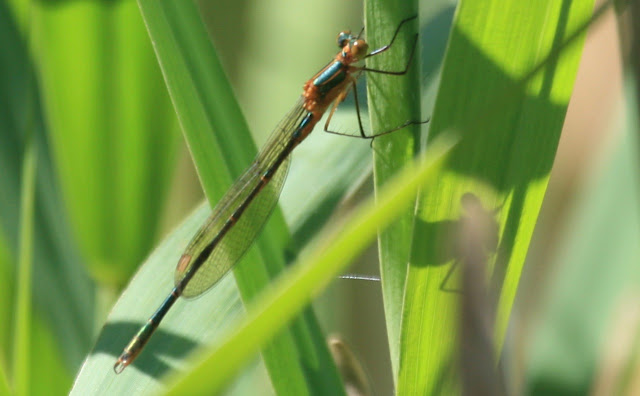 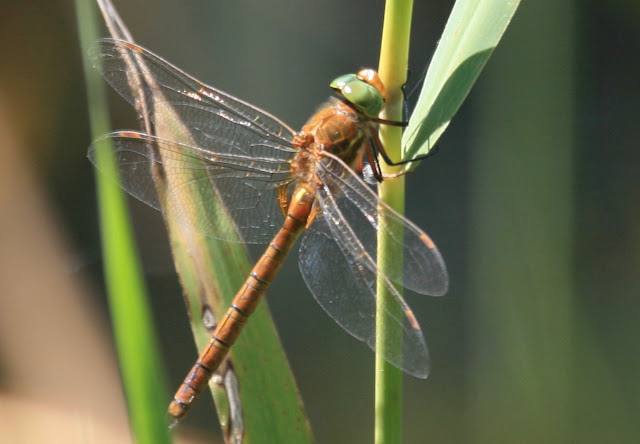 Then onto the North Wall, and following reading the RSPB blog, we looked for and found Six-Banded Clearwing. a small digger-wasp-like moth. As the blog said, you had to get your eye in, and realise that the small yellow-and-black thing flying around was not a wasp. The method of flying was distinctive, and  when it settled the moth-nature was apparent. There are some great photo's here, and here's mine which is crummy but is mine. Next time I find a mass of birds-foot trefoil I'll know what to look for. 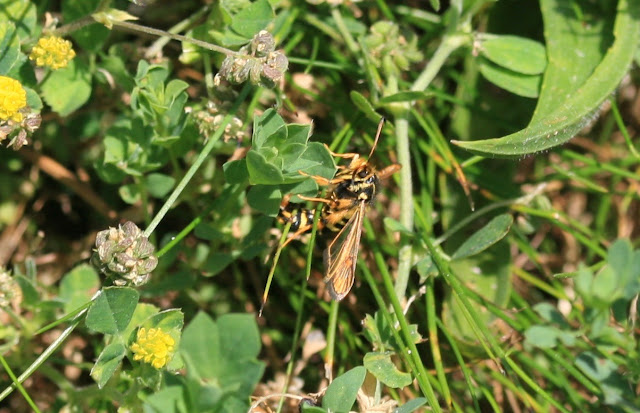 A Bittern flew over, then from the scrape hides 6 Spotted Redshank, 3 Green Sandpipers, 2 moulting male ruff, 6 Little Gulls, and a few Little Terns, Avocets, Mediterranean Gulls, 2 Stonechat families then back to the centre with a Marsh Harrier on the way, and lunch.

Then the woodland walk. An early quiet and shaded walk, we had 6 White Admirals, 2 Silver Washed Fritillaries, 3 Purple Hairstreak, lots of Norfolk Hawkers and Ruddy Darters, Ringlets, and a pair of Marsh Tits.

Despite an excellent list across all wildlife classes, we weren't finished. Our two main objectives were yet to come. I enquired in the centre where we might see these, and a very helpful ranger got a large scale map, and marked two areas with a pen. We went to the first, Westleton Common. I thought the late hour may be against us, but soon David was frantically waving, and on coming over we saw he had some Silver-Studded Blues. The underwings were much in evidence, and a tatty male with lead-blue and brown upper wing was showing. (for better photos see David's blog) Also amongst the heather was a large Queen bee. It was huge, over an inch long. It clambered slowly round the heather as if it had all the time in the world, which in a sense it had, its life cycle being the epitome of free-riding. The shiny back, and yellow fur edgings on the tail indicted cuckoo bee, and I assume, as it is the commonest in my area, Vestal Cuckoo Bee.