The science of Greenhouse gases – The physics is simple

The physics of greenhouse gases is well known. The sun radiates energy, mainly in the visible spectrum, which falls on earth. The earth radiates it back, but because it is cooler than the sun it is radiated back at a lower frequency in the infra-red spectrum. Some gases, (mainly ones that are not diatomic) absorb this radiation so reducing its radiation back into space. Without these gases the earth would be colder than it is with much larger day/night temperature variation. Increasing the amount of these gases should increase the temperature of the earth. For an excellent account see [1]

A table of greenhouse gases generated by human economic activity is shown below[2]. The main ones are Carbon dioxide (CO2), Methane (CH4) and Nitrous Oxide (N2O). There are then a whole raft of CFC’s and other entirely non-natural gases which occur in trace amounts but are highly greenhouse-causing shown below. I have included just one(CCl2F2) The table has a column of “warming potential (100year)”. This is the contribution to global warming from a molecule of gas over 100 years based against that of carbon dioxide. For carbon dioxide and nitrous oxide these do not break down by themselves, but methane reacts with ozone to create water vapour and carbon dioxide, so over time will disappear. The warming effect of a molecule of methane is, by itself, higher than the 21 shown here.

So the basic physics is indeed simple. We have generated greenhouse gases which have gone into the atmosphere and have resulted in the previous balance of energy being disrupted, and the earth is slowly heating up as we have seen in the previous posts.

Science is about numbers, and a key number in the science of global warming is the Climate Change Sensitivity. This is “broadly defined as the equilibrium global mean surface temperature change following a doubling of atmospheric carbon dioxide concentration”[3]. There is considerable dispute as to what this number is, for instance a widely quoted letter to Nature in 2004 [] states “We estimate a probability density function for the sensitivity of climate to a doubling of atmospheric carbon dioxide levels, and obtain a 5–95 per cent probability range of 2.4–5.4 °C.”. Well for something where the physics is simple, that’s an enormous range, and the reasons for this range illustrate many of the difficulties at the heart of the science of climate change and the debate about global warming.

The reason for the range is primarily around the changes in the concentration of water vapour which is a greenhouse gas, and the extent to which consequent changes impact the temperature. It is not clear how much additional water vapour will be present in the atmosphere due to warming, or how much the reflection back of light from clouds offsets the additional warming.

One aspect of warming is that temperature change is not equally distributed. The loss of ice, for instance increases warming in arctic regions. This can be seen most clearly in the chart shown below [4] which shows the UK as having a 2C increase in temperature but the high arctic having an increase of over 4C. Here Antarctica is not warming, but Antarctica is different – it is surrounded by sea which acts as a means of drawing heat away from Antarctica. Some use the lack of warming or melting in Antarctica as a piece of contrary evidence for warming taking place, but there is no basis for thinking that everywhere warms at the same pace, so that criticism is not a valid one.  One feature is a blue blob south of Greenland – this is believed to be due to melting ice producing a flow of cold water into the north atlantic, so is no source of comfort. 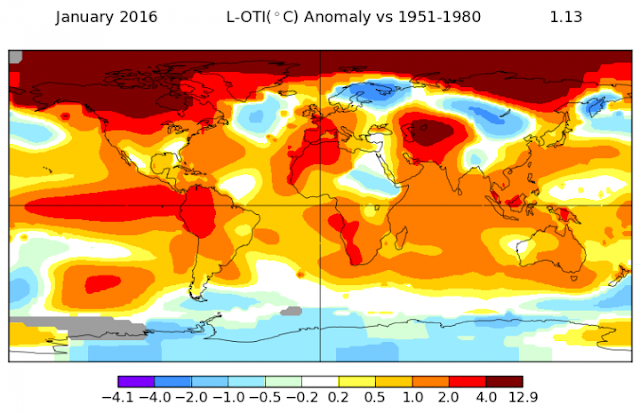 Reflection back of sunlight is one of the main contributors to determining whether and how much the earth warms. Events such as volcanoes, or even forest fires, can increase the aerosol effect [5], whereby particles in the atmosphere reflect back light, and so reduce the heating effect of greenhouse gases. Melting of glaciers, snow, and ice also decreases reflection back of sunlight. Climate changes often have offsetting effects, so the increased greening of arctic regions due to warming and ice-melt has the effect of lowering warming due to increased absorbtion of carbon dioxide by plants, and of increasing warming due to loss of reflectivity. It seems that losing snow and gaining plants is generally warming is the loss in reflection outweighs the reduction in carbon dioxide.

There are a range of feedback effects that occur, some positive and some negative. Increased carbon dioxide increases temperature which increases the amount of water vapour that increase the greenhouse effect that increases the carbon dioxide in the atmosphere, and ice and snow melt reducing the reflection of light back to space increasing the greenhouse effect. There is a clear difficulty in evaluating theories where an input can become its own output, so Climate science uses the term “forcing variable” to identify which quantity is being independently changed.

Next post I will look at some of the history of global temperature and composition of the atmosphere and try and see how this informs the current debate.

Update. So that bit about the pacific ocean cycles causing the hiatus post 1998? turns out it might have been the aerosol effect from burning fossil fuels  (http://www.skepticalscience.com/aerosols-key-to-slowdown.html). Or not.

Posted by DorsetDipper at 3:21 PM