What could be better than a hot sunny Monday in May on the Norfolk coast? Well the previous day would have been better, but such is birding.

Early doors at Pat'sPool. A distant Temminck's Stint, but well lit and good views, then a selection of waders - Greenshank, Ruff, Little Ringed Plover, Black Tailed Godwit, Dunlin, Common Sandpiper, and of course Avocet and Redshank but those pass unnoticed now. A White Wagtail in the corner, and a spectacular Marsh Harrier over. Then everything went up, or off, as a Peregrine came over. Later a Hobby had a similar effect.

On to Titchwell and a packed Parinder Hide. Both stints are here today hidden on the far bank of the near island. One emerges, but which is it? We almost take a vote, but the consensus is Little Stint; black legs, rufous in the back, slightly tatty breast patterning. Then someone points out that the Temminck's Stints are sat in front of us, and indeed they are; like mini Common Sandpipers, dull grey-green. Fantastic views. Less than fantastic photos below. 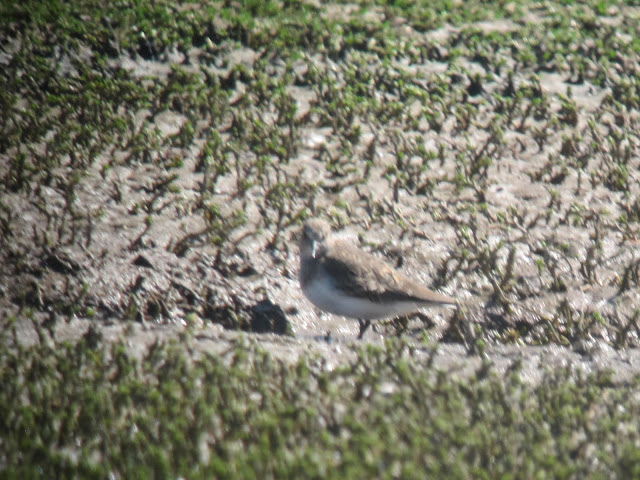 Just time for Red Crested Pochard from the screen by the Fen hide, and then onto Cholesely Drying Barns. There are some other birders, and we peer through the hedge. A Dotterel, barely visible in the dip of a ploughed field. Then another, and as our eye gets in we get to 13 Dotterel. Great views, less than great photos. 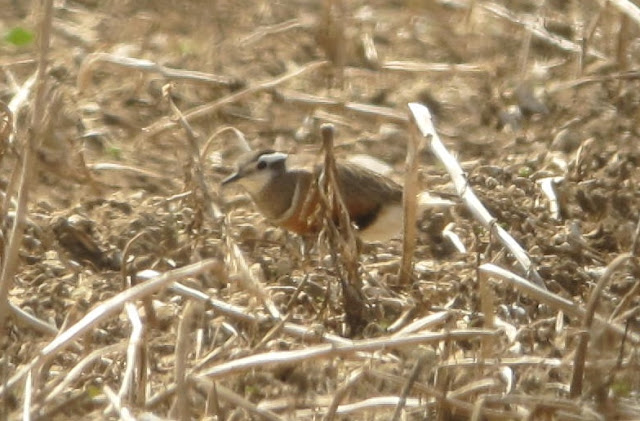 The stand out birds of the day were the Ruff. About 6 males in total plus one Reeve. The males all in spectacular breeding plumage. On return I dug out my copy of "The Ruff" by Johan G Van Rhijn, one of the Poyser series. I recall something about the colours of the ruffs signifying social status; that the black ruffs are dominant at leks, that the white ones are pages to the dominant males, and the more pages a dominant male has the more successful it is at breeding, and there are a third group of males who go from lek to lek challenging the dominant males. However on re-reading it is not as clear as this. The colour combinations of ruff and ear coverts are not fixed or limited, and social position is not fixed. Some pages can step up to be dominant if the dominant male disappears, for instance. This seems to be a current theme of sociology; that we had a phase when we were able to identify rules of behaviour for certain species, but now we find increasingly that, as in humans, social rules of the animal kingdom are there to be broken. Nevertheless, whatever the actual details of the lek, to see the males in that brief period when they have the full mating regalia is really something special. 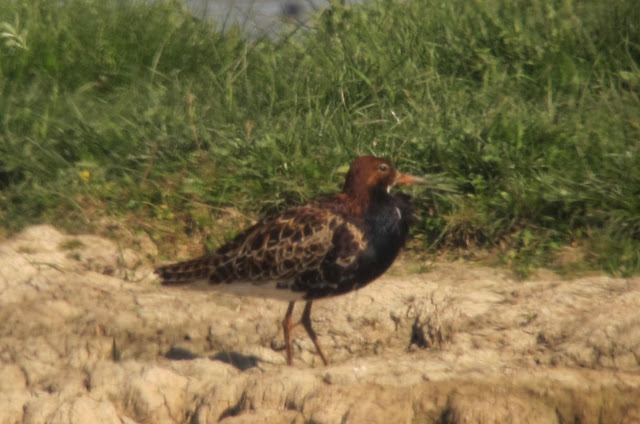 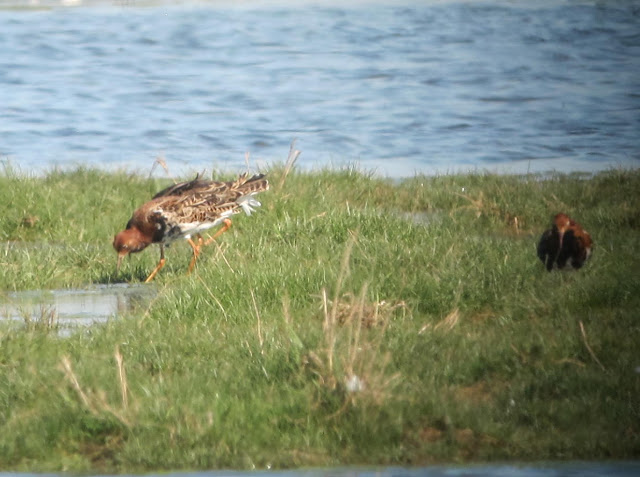 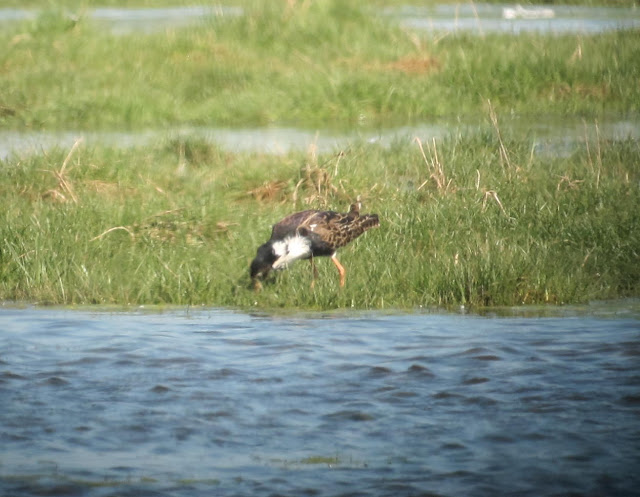 Posted by DorsetDipper at 3:41 PM No comments:

7am and I am in prime position by the Obelisk, looking west towards Pulpit rock, a prominent tower of rock on the end of a short spit. To the right is a gap (known as "the gap") which looks west toward the North Devon coast. I am joined by one other person. And so it begins.

Gannets are in evidence drifting by in small numbers, there are a few Manx Shearwaters, lots of auks (the settled birds are mainly Guillemots but there are a few Razorbills), and Fulmars and Kittiwakes in low numbers, Larger gulls, Cormorants and an occasional Shag make up the supporting cast.

7:15 is that an owl? In the distance a large pale bird with round wings is flopping along low over the water. No its not an Owl, its a male Hen Harrier which slowly makes its way east. A group of regulars turn up from the Obs just in time to get their eyes on what is a Portland rarity.

8:25 Little Gull called in from the Obs, and we pick up a first winter steaming west. It latches onto a small party of feeding Commic terns and feeds. The less experienced of us (i.e. me) get the opportunity to see why this is not a Kittiwake which has similar plumage in its first year. Its all in the flight.

9:00. This is officially the start of Skua Hour. Anticipation is high. 20 Commic Terns E in two flocks.

9:10. A tight bunch of waders coming in from SW at medium height. 8 Grey Plover, easy to pick out with their resplendent black bellies, and 12 waders which it is eventually agreed are Barwits (Bar-tailed Godwits) on account of their medium size, straight bills, and general browny-grey featurelessness.

9:30 20 Barwits east, and a Whimbrel by the Pulpit playing with its food.

10:00 am. Skua hour has finished with none of the hoped for Poms. Some of the regulars head back to the Obs and we remaining few are concentrating extra hard as departing birders normally mean a good bird is about to appear! A tern drifts by from the east close by, a Commic Tern. I have a brief look, call it out, and return to scanning the distance for that elusive rarity. One birder notices long streamers - is it an Arctic Tern? The bird turns ands comes back. It has an all black bill, and a local makes the call on what should have been obvious the moment it came past; its a Roseate Tern. It disappears through the gap, but fortunately remerges more distantly with two commic terns and fishes for a while. We get to see the smaller size, the paler more uniform plumage, and those never-ending tail streamers. It feeds, and we see the faster wingbeats, the more buoyant bouncy flight and the dipping down to the surface. and whilst we are enjoying the sight of this rare bird gracing our sea watch I am thinking of the patch Black Redstart , and that this is the second time in about as many weeks when I have screwed up the id of a scarce bird, on both occasions because I did not expect that bird, there, at that time and I identified on the basis of my preconceptions, not the evidence in front of me. As a wise man once said, the hardest lessons to learn in life are those you thought you had already learnt.

10:45 a summer-plumage Black Throated Diver emerges from behind the Pulpit and steams east. The throat patch and sparkled back are clearly evident. A fantastic bird to effectively end our sea watch. A few more Common Scoter come through, but there are just a handful of us left, and the tourists have arrived and one after another they come up and ask the time-honoured question "what on earth are you idiots doing?" "what are you looking at?" It is time to go.

The top fields are empty apart from a Sedge Warbler, a few Whitethroats, and a handful of Swifts and Swallows over-head. I have a large Full-English breakfast in Weymouth, even though its mid-afternoon, then take a walk round a sun-drenched Lodmoor. It is rubbish, with just a Ringed Plover and a Common Sandpiper, but the Marsh Harrier does a fantastic leisurely circuit of the reserve and a pinging Bearded Tit flies past, so its just a nice way to end the two-days. Then its the 180 miles to East Herts. I set the cruise control, and sit back with the incomparable Richard Hawley on the cd player and the early evening sun behind me lighting up the beautiful spring countryside and the by-now clear roads.

Here's a appropriate song for the trip.


Posted by DorsetDipper at 8:20 AM No comments:

A leisurely trip down to Weymouth. Departure delayed to post 9am to avoid the M25, then detour through Bournemouth, Sandbanks, and the Chain ferry to Swanage. Poole Harbour and the Purbeck Hills looking fantastic in the bright spring sunshine.

And so to Durlston Country Park where I spend a couple of hours in search of Early Spider Orchids. eventually I find a couple of assistants in the shop who tell me, contrary to my experience, that they are all over the place, particularly in the Lighthouse field and in the top fields. Once you get your eye in of course ... so back I go and eventually I find a few by a pit. Little gems they are too, and close up quite scary little gems. Anywhere here's a few pics with my super new Sigma Macro lens. 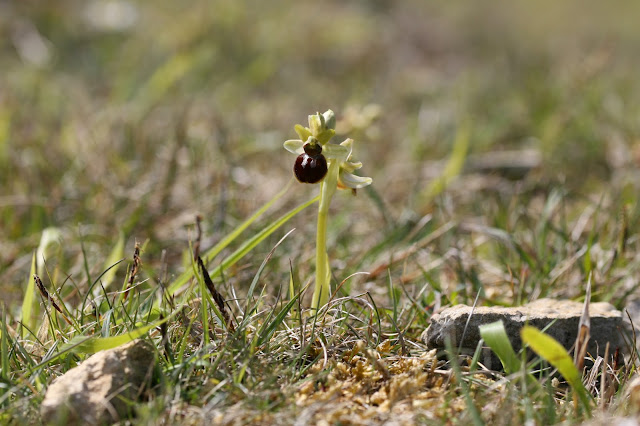 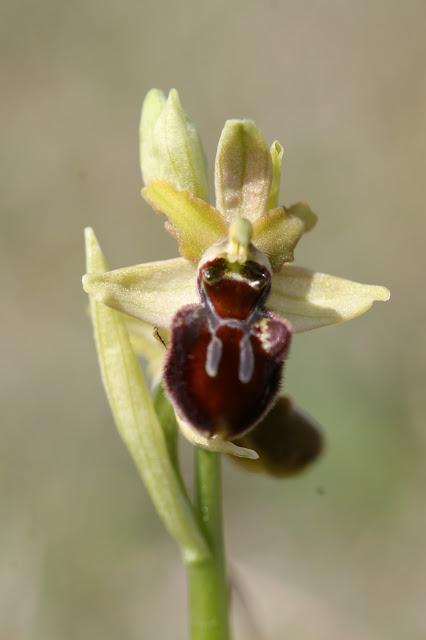 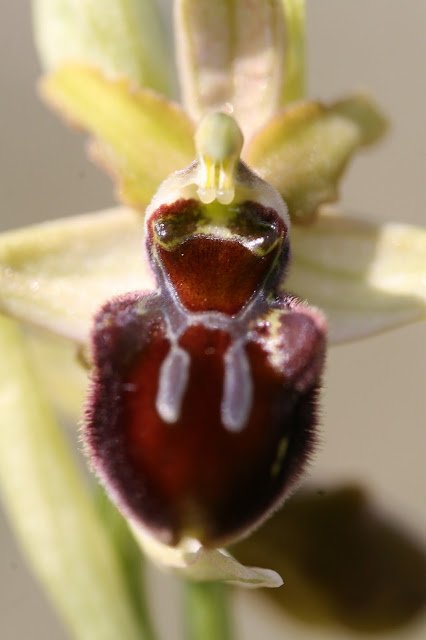 Other orchids were not hard to find. Early Purple Orchids were widespread with their longish purple spikes all over the site. 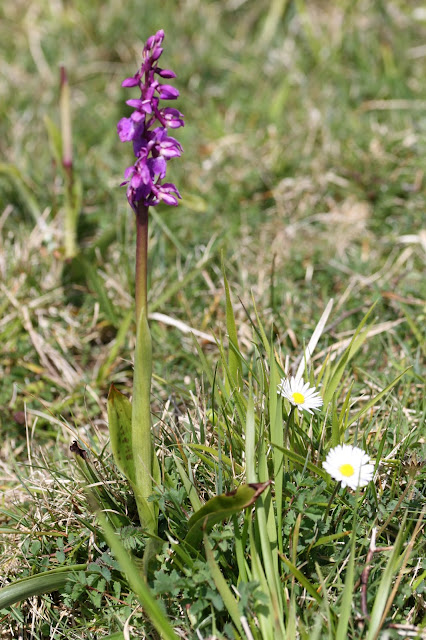 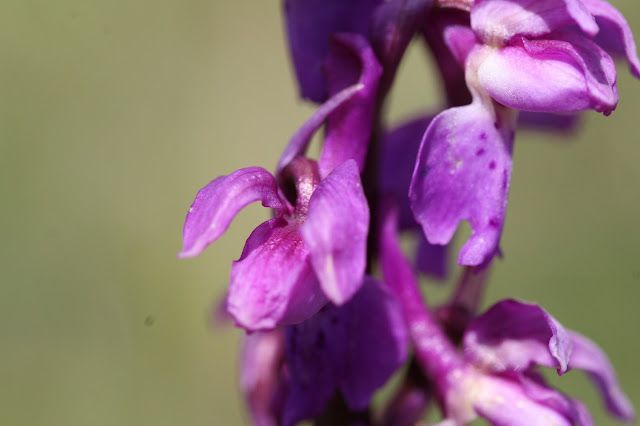 I found a couple of orchids without spots on the leaves and more clustered flowers, and subsequent reading confirmed these as Green-Winged Orchids. Needless to say, it appears not to be a cast-iron rule that Early Purples have spotted leaves and Green-winged have unspotted leaves, just a general case with exceptions. But those wings with the veins are really something! 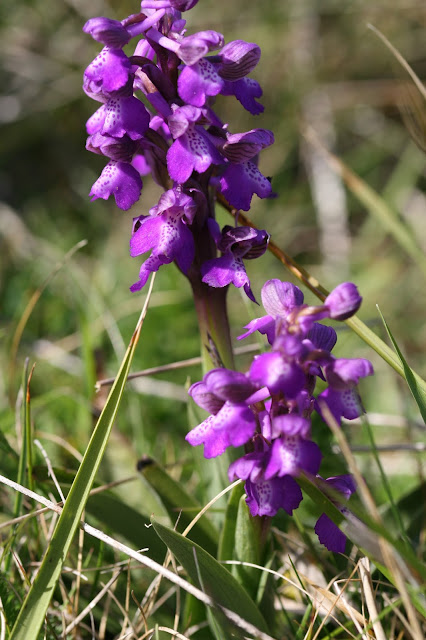 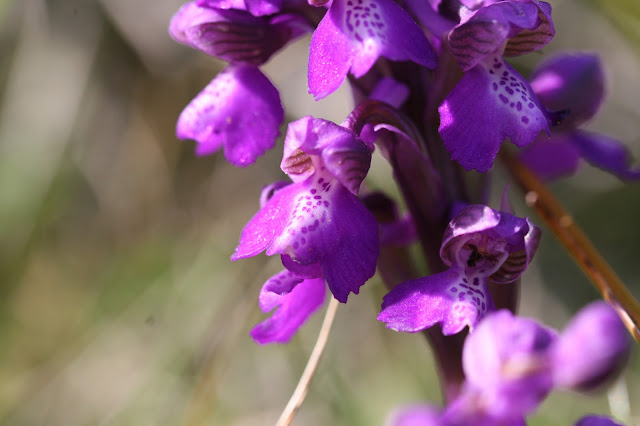 There were lots of Cowslips, in fact fields full of them, and some bees buzzing round. Photographing bees is proving to be quite a challenge as they are either whizzing round or else are deep in a flower with only their lower halves sticking out. Here's one, and I'm thinking Carder Bee but am open to suggestions. 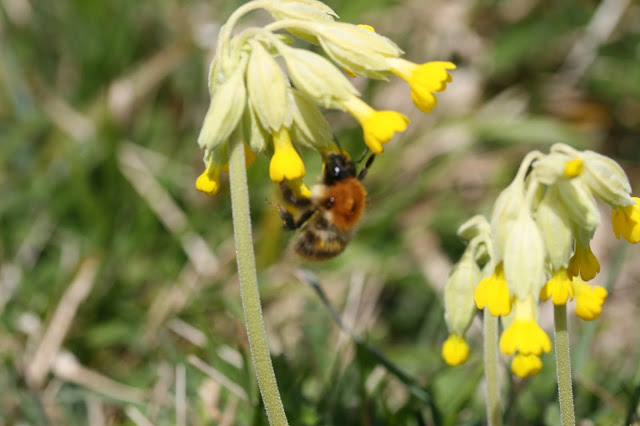 Then off to Arne. at this time of year it is full of fantastic wildlife, but late on a windy spring day most of it is hiding. A few deer (I assume Sika Deer) at ease in the presence of people, and then in the car park a Fox. I stood still hoping it wouldn't notice me and run off, but inevitably it saw me. It looked at me, came over and stood two yards away looking impatiently at me as if to say "where's the food?". And so I met Derek the fox, famous resident of the Arne car park. Needless to say in this metro-sexual world, Derek is a vixen. 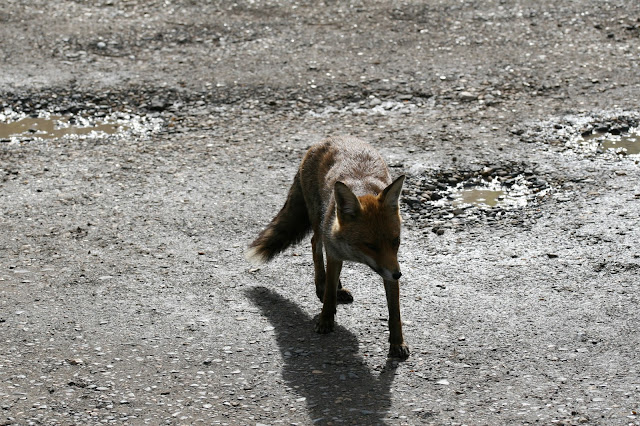 Finally I rolled into Ferrybridge in the early evening and in the low sun had 9 Wheatear, 6 Sanderling, 2 Whimbrel, 3 Little Tern on the mud with more flying around and lots of Dunlin and Ringed Plover. The Wheatears were looking quite soft-toned and plump, so I'm guessing Greenland Wheatear? 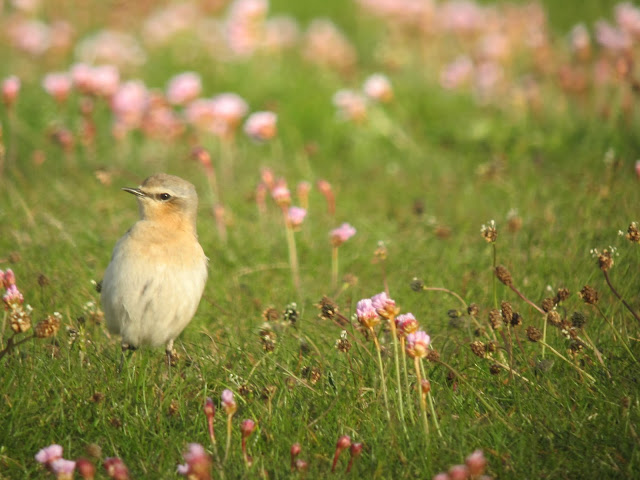 So overall not much of a bird list, but a cracking day overall. The main reason for coming down is that overnight the wind swings to the south. Migrants will pour onto Portland, seabirds will stream past, and from dawn tomorrow I will be in place and surely will absolutely clean up.
Posted by DorsetDipper at 10:42 AM No comments: