A freezing cold day but a clear blue sky, so off to Rye Meads to give the camera a go.

Quiet, initially, with no sign of the water Pipit. Off to the Gadwall hide where there is a Shelduck amongst a mass of Shoveler and Gadwall. Then back to the Draper hide and a fly over Green Sandpiper, a Grey Wagtail, and a Snipe in the corner. The light is good and as always the birds are not too distant, so I fill up on Wigeon and Shoveler. 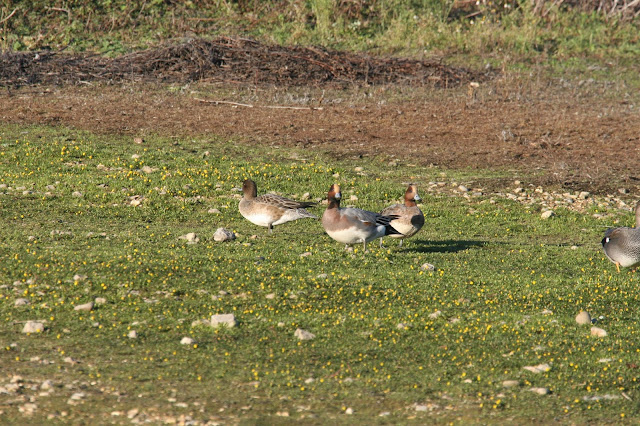 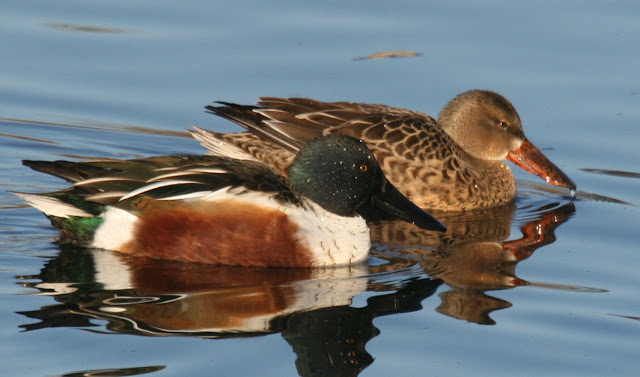 The chap next to me starts clicking away with his camera and I realise he's found the Water Pipit. Its right in front of us on a spit. We get a half hour of fantastic views, seeing every feature. Which would be great if it were any other bird, but this is, at least in winter plumage, possibly the dullest bird known to man. 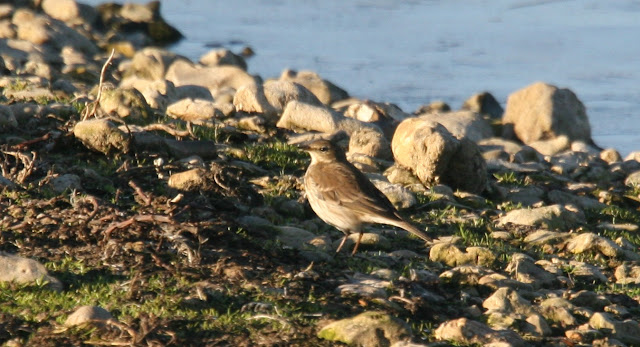 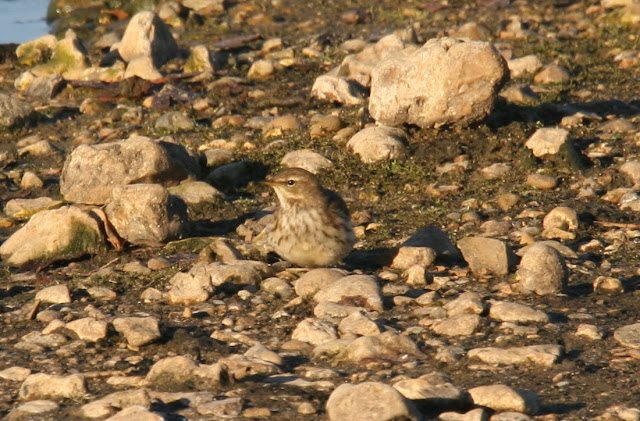 Posted by DorsetDipper at 10:28 PM No comments:

Chauffeur for D#2 who was spending a day in Hampshire, so some free time round Poole Harbour. First stop Lytchett Bay (20 Oct). I've screwed up the tides (again!) and the water is lapping at the bay edge as I join two regulars. "Are you here for the Whooper?" Well no but I'll take it. "Its only the second record  of Whooper Swan for the harbour". I tactlessly mention that round where I live there are fields full of them in winter. But look at this deer! There are a group of Sika Deer including a male with a fine set of antlers. The locals' response indicates this is equivalent to seeing a squirrel for them, and fewer deer would be a good thing.

On to Durlston. Lots of Chiffchaffs, Stonechats, Meadow Pipits, Swallows, nothing else. Then on to Arne, rapidly becoming a favourite reserve. There's movement going on, and a brief Lesser Redpoll amongst some Chiffchaffs and Goldcrests. Three Fieldfares in a tree, and back in the car park a Firecrest doing its thing in a holly bush. A really nice way to end the day.

A couple of weeks later (Sunday 13th Nov) and I'm back again. I go to Arne but it is packed with groups of folks to see where Autumnwatch was filmed. Nothing wrong with lots of people out enjoying the countryside, but Mr Grumpy decided this was an opportune moment to head for Hartland Moor and the Avocet hide at Middlebere Farm.

Wow, what a place Hartland Moor is, particularly on a crisp autumn afternoon. A vision of purple and orange, and quite wild. I got to the Avocet hide, and there is just one other person. I was there from 2pm to 4pm during which time a few couples and individuals came by, but there was always seating space.

The hide looks over the Wareham channel to Arne reserve, and with the sun behind its a fantastic view. for a while there isn't much to see, so I admire the view. At 3pm a ringtail Hen Harrier appeared over the far bank, it quartered a marsh, then headed over the channel towards us, and kept coming until it flew across the front of the hide at a distance of about 10 yards. Then a flurry of birds from behind us, Lapwings, Brents, a few Black Tailed Godwits, and a female Merlin gliding over and heading off towards Wareham. Just as we were basking in the glow of these raptors a Swan flew in and sat on the mud. A Whooper. The other occupants were very excited. Only the third record for the harbour. I tactlessly mention that round where I live there are fields full of them in winter. An Avocet comes out of a gully to admire the new arrival.

at 4pm its a bit quiet, the sun is setting, just a few Starlings flying into the reeds to roost so I think its time to go. But a quick scan shows 3 female Goosander flying over, and the log book says male Merlin has been seen in the adjacent hedge so I give it a scan and there it is. A great view, in fact, precisely this view.

I head off back down the path to the car. Another Ringtail slips by, then a Barn Owl appears briefly, and finally three doe Sika Deer stop just forty yards away and look me up and down for a while before casually wandering off.

What a place. Possibly one of the best sites in England for wildlife. If you look through this blog from Aidan Brown you will see many fantastic examples of photos and wildlife wisdom that showcase the wildlife of this corner of England much better than my account here.
Posted by DorsetDipper at 5:41 PM No comments:

Note - login problems mean this is somewhat overdue, but here it is anyway.

A couple more visits to Norfolk, this time in the excellent company of local birder and outstanding photographer David.

First was Titchwell on 3rd. We got out the car and immediately had a flock of Starlings going through the car park with a high pitched trilling - Waxwings! We had a look around but could not relocate them. Next stop was the feeders and my first Brambling for the winter, a sombre female. then out on the freshmarsh and plenty of Ruff, a few Avocets, and assorted waders and ducks. David picked out a Merlin flying over the marsh and disappearing westwards - first for this year (and a few more) for me. The beach had been productive for some but we saw only standard stuff - Common Scoter, Goldeneye, Merganser, Red-Throated Diver.

Back to the centre and we were tipped off that the Waxwings had gathered round the entrance, so we joined a small crowd and had a fantastic half an hour surrounded by birds voraciously feeding. They ignored us to settle just a few feet away in bushes picking off berries and trilling to each other. Fantastic!

Then Monday 7th and the winds were strong from the North East. We pitched up at Cley beach car park later than ideal due to my family commitments but still in time to see some movement. It was high tide and the waves were pounding the beach. Ducks were moving steadily westwards. Several flocks of Eiders moved west confusing me initially with the contrasting white and black of the drakes. A few hundred must have moved through during the day. We quickly had success with a Little Auk belting west close to the shoreline. I had seen Little Auk briefly once many years before, although in all honestly it might have been a Starling, so it was nice to get a proper view of this enigmatic northern bird whizzing along. There were a few more at different distances during the watch, and we soon had 3 distant Little Gulls and then 2 even more distant Pomarine Skuas going west. One of the watchers was pointing out the pale rump indicated Pom, although to be honest I thought I was doing well just to see them at all.

More ducks went west - Common Scoter, Wigeon, Brent Geese, a male Pintail and a Red-Breasted Merganser. For a moment I thought a horse was swimming through the surf, but it was an enormous bull Grey Seal.

A quick stop at the reserve centre for coffee and lone Waxwing, then Holkham Gap for a flock of Shore Larks. They were flighty but often ended up nearer us than when they took up, and on one occasion flew round our heads calling away. Fantastic views of about 80 birds against a dramatic but darkening autumn sky.

At this point I normally post some distant grainy shots, but no need today. I can just send you to David's blog for some excellent photos of the Waxwing and Shore Larks. A couple of days seeing some fantastic birds with good company - who could want for more.
Posted by DorsetDipper at 8:43 PM 2 comments: