The Colne estuary is well known for attracting large numbers of waders and other water birds. The problem is that its quite large, difficult to watch, and for a visitor with little knowledge of the habitats and tides, its a bit hit and miss.

What would be really useful is a specially excavated wetland that can take large numbers of birds as the tide rises and falls, ideally with a suitable hide with large windows and arm chairs where you can sit in comfort and calmly search through flocks of waders. And, as if by magic, here it is, the newly opened intertidal area at Fingringhoe Wick.

A visit on Wednesday on arising tide had spectacular numbers of waders. Rough numbers only but many hundreds of Black-Tailed Godwit, low hundreds of Avocet,  many tens of Dunlin, Ringed Plover, Grey Plover, Knot, Redshank, add in some Bar-Tailed Godwit, Curlew, Oystercatcher, Lapwing, then at least 10 Greenshank, a Common Sandpiper, and well picked out by another birder 2 Curlew Sandpiper, and that's quite a wader list. About 20 Wigeon, some Little Egret, and an obliging Kingfisher made for a cracking list.

The fields by the hide had Meadow Pipit and some common finches, and there were some willow Chiffs hoetting in the bushes. The reserve had lots of hornets around too, so a good visit.

An excellent addition to the list Essex birding sites. I think a return visit may happen in the near future. 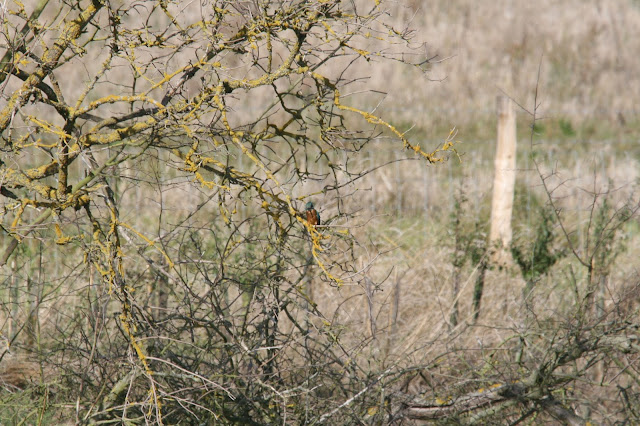 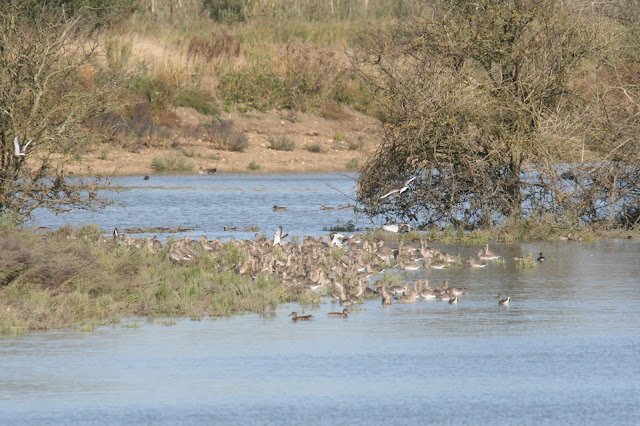 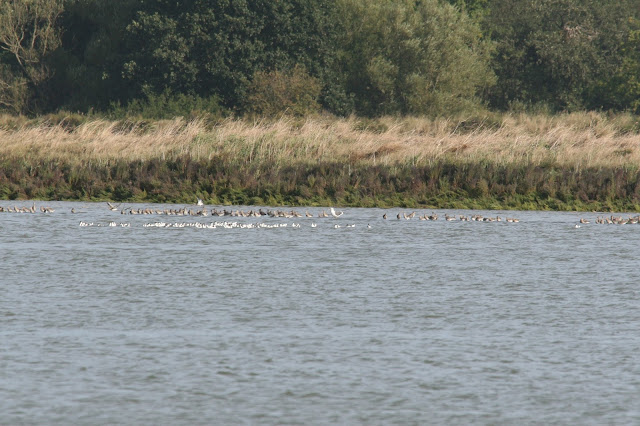 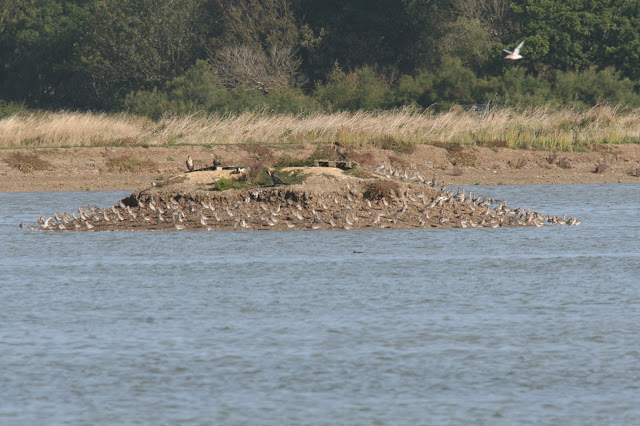 Posted by DorsetDipper at 10:23 AM No comments:

So, a scorching September day with a SE wind. Migration mayhem or Summer birding doldrums? I headed to the Thames Estuary to find out, first stop Canvey Point.

A row of empty benches meant I had clearly got this wrong, as at even slightly productive times there are a few locals set up here. I sat and admired the expanse of calm estuary that high-tide had brought. Slowly some birds appeared - a small party of Teal upstream, a few Swallows from over my shoulder, some adult Mediterranean Gulls flying around easily picked out by their plump appearance and translucent primaries. Then a distant Black Tern, juvenile presumably from the darkness of the plumage, flying strongly out then back up the estuary. Most intriguing was a bird the size of a very small skua flying rapidly but gracefully low over the river. Uniform brown, I realised I had no idea what family it belonged to. Eventually it rose up and I could see an extended neck and head so I guess a wader of some description but honestly I have no idea. Moments like that make sea-watching fun.

There were 4 cetaceans mid stream, the curved backs and fins breaking the surface. Eventually one came far enough out to reveal a bullet head - Porpoise. Very nice too. Then a Clouded Yellow over the memorial lawn.

And so on to East Tilbury. It is over a decade since I last went so this was a trip of rediscovery. What a place! Titchwell on my doorstep! Masses of birds round Coalhouse Fort, mainly Starling and House Sparrow but a Blackcap and Willow Warbler, then Stonechat and Linnet on the way to across there grassy area along the sea wall to the estuary. The estuary is hard to watch as the grass hides the near mud, but the tide was falling so soon the mud became exposed a long way out. Some belting Grey Plover made the trip worthwhile just for their sparkling plumage alone. There were Bar-Tailed Godwit, some Knot, and Turnstone with them. A Hobby was hunting behind the sea wall then over the estuary, and a Marsh Harrier came over from Cliffe., and Kestrel and Sparrowhawk gave four raptors in as many minute. An adult Yellow-Legged Gull was feeding on the foreshore. A weasel ran out of the grass then back between my feet.

I walked back and round Coalhouse Fort to the structure due south of the fort. On the way there was juvenile Whinchat, and on the estuary upwards of 800 Avocet that all took off and flew further upstream. Just an awesome sight, the stuff of TV documentaries. A flock of 20 Commic Terns and 2 Sandwich Terns appeared and sat on the mud. Better birders than I would surely have picked up some Arctics but distance, heaths, blah blah. 3 Seals were hauled up on the mud - Common Seals? - Finally as I sat by the estuary I found 2 juvenile Curlew Sandpiper amongst the Dunlin and Ringed Plover and a late Common Swift barrelled over going E down the river.

The whole area was full of insect life too. There was what I am calling "Thames Bee" as I have seen this elsewhere in the estuary - blackish with a narrow white band top and bottom of thorax and a whitish tail. Possibly Shrill Carder but I need to see more of this one to have any idea. There were lots of Wall Butterflies, some Small Heath and a couple of Small Copper, and lots of odanata. I could spend all day here and still be seeing stuff. Expect more!
Posted by DorsetDipper at 5:49 PM No comments:

The Pec was back. An hour away, nice reserve, easy decision. When I got there it was clear a number of others had thought similarly and folks turned up all morning, consequently the hide was well populated but good natured throughout.

The Pec was not visible at first. A wader about 100 yards out looked promising; it was asleep and stood facing away, but a brief lift of the head gave encouragement - not a Snipe. An hour later and it had rotated slightly to show white on the flanks and underneath, and then about thirty minutes later it completed the rotation et Voila! An unbroken neat breast band. Pectoral Sandpiper on the year list. 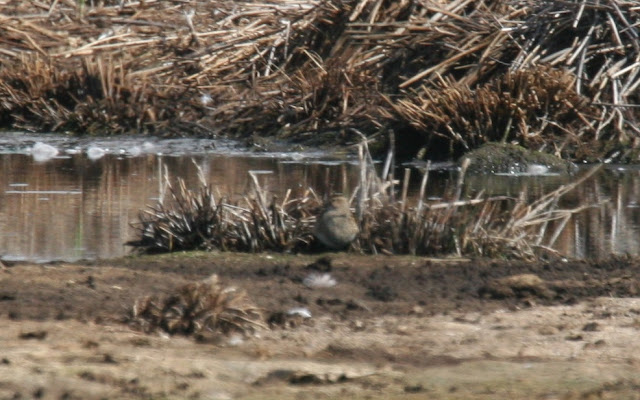 As is often the case when going see rarities, the star of the show was something different. In this case, a juvenile Curlew Sandpiper. It was consorting with two Ruff and came close under the hide. The three of them stood on a small island and the reflection of them in water as they stood bathed in direct sunlight from behind was something to behold. Needless to say my photo does not do justice. 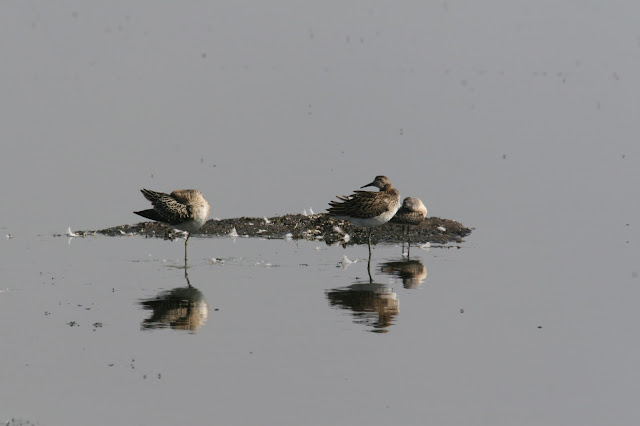 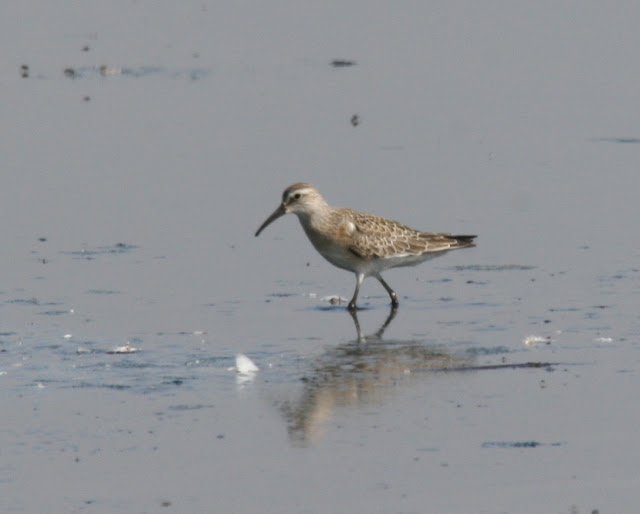 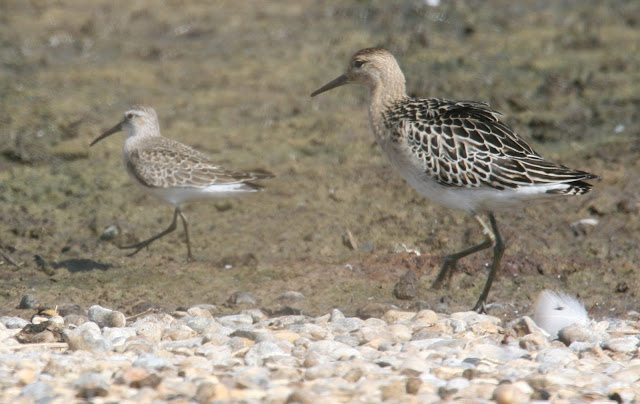 The chap next to me had some top gear - a prime 500mm lens with a 1.4x converter. He very kindly offered to let me put my camera base on his lens and soon I was clicking away. What a lens! Auto focussing, the lot. There's a couple of cropped photos below. the poor composition is my fault but the crispness of the birds is something to behold. A very generous offer to put thousands of pounds of gear in my hands, the kind of encounter that gives you a warm glow all day. 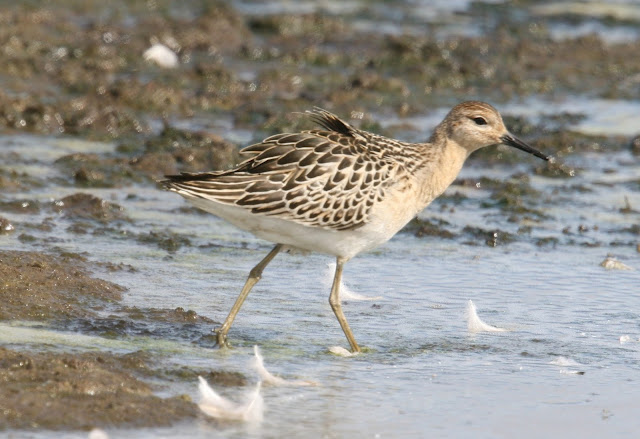 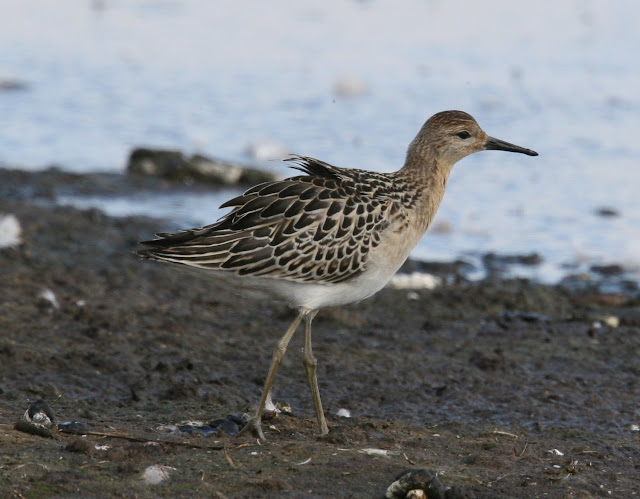 Hobby hunting over the marsh, adult Yellow Wagtail in front of the hide and 2 Lesser Whitethroat in the car park completed the list.

I had intended to go to East Tilbury on the rising afternoon tide to get waders plus maybe some sea birds on the SE wind, but with the Curlew Sand in the bag I was off to Canvey Point instead. There had been some action in the morning but there was nothing to be seen when I got there. We managed 20 Commic Terns upstream, a Hobby from across the river ended up flying right over our heads, and towards the end of the watch a distant Manx Shearwater was drifting out of the estuary. That just left the local birds to admire; several Mediterranean Gulls, hundreds of Oystercatchers, a small flock of sparkling Grey Plovers, and a few Sandwich Terns. With some excellent company and warm sunshine it was a cracking second part to the day's watching.

BirdGuides has WWBT, Pom Skua, sooty shearwater and several Black Terns in the estuary today, but these birds are generally the reward to locals for many hours watching, and its an achievement to see any of these if you just turn up for a couple of hours on the off chance. Today was just nice to sit in the sun and see what drifted past.
Posted by DorsetDipper at 7:31 PM No comments:

In search of a Pectoral Sandpiper. Needless to say it had gone. Despite this, or perhaps even because of this, a chance to enjoy the current glut of waders and other associated birdlife.

A juvenile Spotted Redshank was the star of the show, with a few Ruff, some Ringed Plover and Little Ringed Plover, Black-Tailed Godwit, 3 Greenshank, Green Sandpiper, Snipe, and Dunlin. Just about all giving good views (see some uncommonly non-rubbish photos by me below!) Otherwise there were several Yellow Wagtails, 4 separate Marsh Harriers, and a few other bits and pieces. Some excellent chat with a couple of reserve managers in the hide too as they discussed the challenges both bureaucratic and environmental of running the reserve. the current crop of waders is partly due to a brief flooding of sea water to help eradicate an invasive Tasmanian plant, so is unlikely to be repeated next year. All the money has historically come from the EU, so there are some challenges in the years ahead to persuade the UK government to continue this work.

A really nice reserve. And what a pleasure to be able to set my scope up in a hide and look through it without having to get into a back-crippling half-squat. 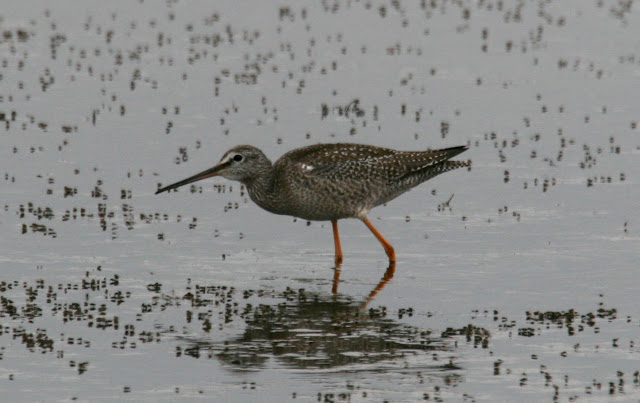 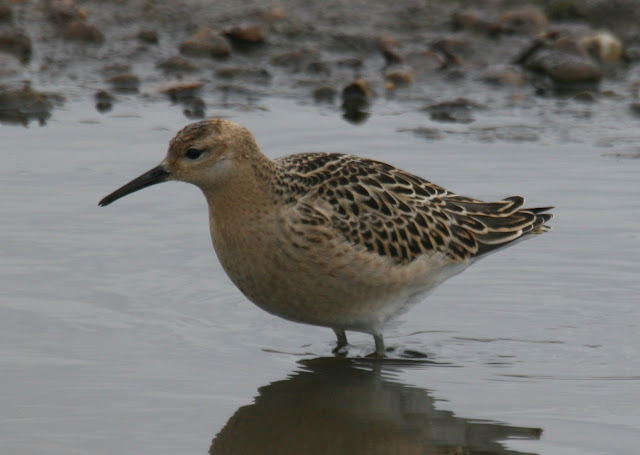 Posted by DorsetDipper at 2:01 PM No comments: