with D#1 on Weymouth beach on Monday night. Lots of Herring Gulls in various plumages. 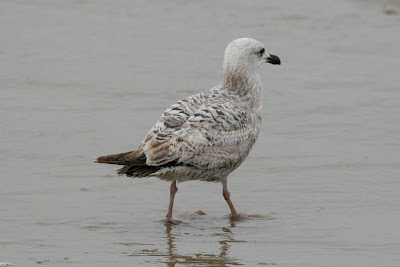 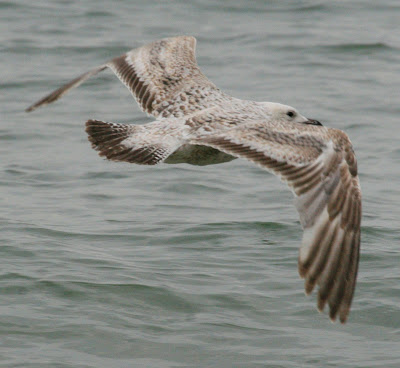 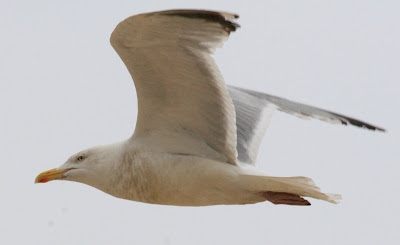 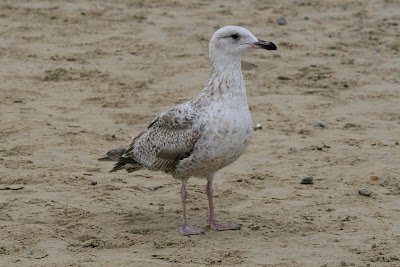 finally D#4 shooing the tide back. 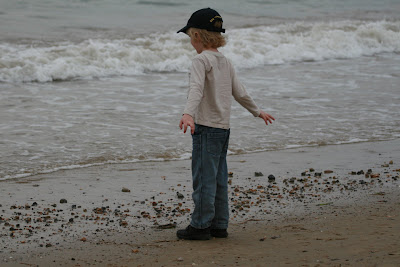 Posted by DorsetDipper at 6:55 PM No comments:

When the River Wey exits Radipole reserve it passes through the Boating Lake, then encounters a sluice system at Westham Bridge before exiting into the saline environment of the inner harbour. There's a footbridge just on the marina side of the bridge which provides a view of the sluice and the inner marina.

The footbridge has been adopted by a Common Tern. It sits on the handrail looking for tiny fish, and when it sees one dives down to catch it. It allows approaches of down to 5 feet - too close to focus. 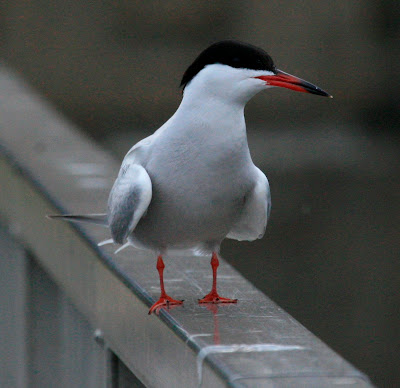 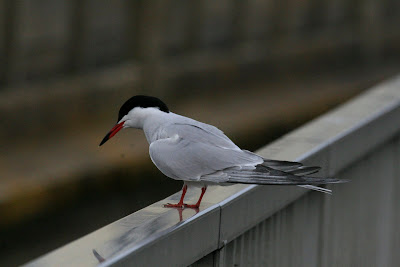 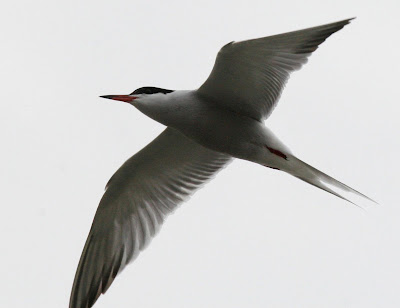 The inner marina is also home to a shoal of about 100 mullet of some description. 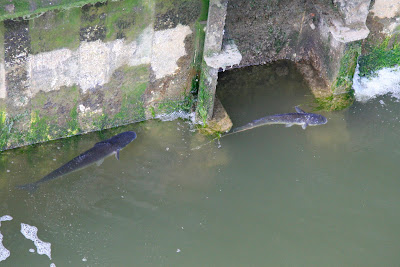 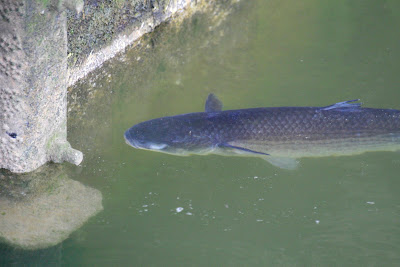 The Common Terns have taken up residence on one of the boats - second on the right I think, judging from the white stains! 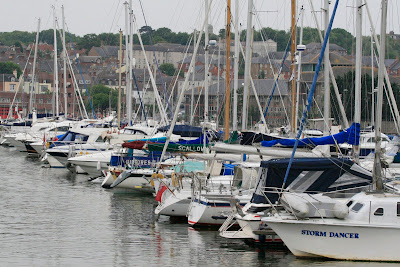 Posted by DorsetDipper at 7:48 PM 2 comments:

A few days in Weymouth. On the trip down on Sunday there was a Red Kite where the M3 and the A303 split. Then down in the centre of Weymouth a Hobby appeared over some flats.

An evening walk round Radipole had 3 Common Sandpipers, lots of Reed Warblers, a Bearded Tit whizzed past and as the sun set the Hooded Merganser swam past. There were 2 BHG's there as well; they are common enough in the fields round the Poole area, presumably on a day trip from the harbour colony, but they are scarce up this end of Dorset until mid July.

Elsewhere it was quiet; nothing at Rodden Hive on Monday apart from lots of Painted Ladies - but unless you've been living in a cave you know about them. Portland was a wash-out if you're a local, but if you come from a land-locked county like myself then lots of Gannets, Manx Shearwater, Kittiwakes, Fulmars, Guillemots, Razorbills, whizzing past in gale winds was quite a sight.
Posted by DorsetDipper at 7:35 PM No comments:

Spent the week in Toronto. It was solid work for just about all of it, but a few birds did make an appearance. The ubiquitous Ring-Billed Gulls, Starlings, House Sparrows and Feral Pigeons, but there were Chimney Swifts with their piercing call, and early one morning in a tree between the Union Station and the Royal York Hotel a warbler was singing bried but persistent birds. I could only see the lemon yellow underside, with a gorget of black markings, and a dark blue-grey upperside. I think it was a Canada Warbler.

I went down to the harbour terminal after work to try and get to the islands, but the service seemed a bit sporadic, the wind was howling, and I had visions of getting stuck on the islands. I added Barn Swallow, Mallard, and Cormorant ( I assume a double-crested one).

The place I really wanted to visit was the Leslie Street Spit/Tommy Thompson Park. This central-Toronto area is a magnet for birds in spring, but unfortunately is only open at weekends so I'm unlikely to get there.
Posted by DorsetDipper at 8:31 PM No comments:

Blink and you'll mis(identify) it.

"blink, The Power of Thinking without Thinking" by Malcolm Gladwell is a book of the moment. The base idea of the book is that many of our initial instincts are better than our considered thoughts. It's a compelling book, but early on he says this;

"The ornithologist Dave Sibley says that in Cap May he once spotted a bird in flight from two hundred yards away and knew instantly that it was a Ruff ... He had never seen a Ruff in flight before, nor was the moment long enough for him to make a careful identification, but he was able to capture what bird-watchers call the birds "giss" - its essence - and that was enough".

David Sibley is later quoted as saying "you know what it is at a glance".

Well ... yes and no. If you watch enough birds you can pick up that instinct. But in my experience the above is a recipe for mistakes. There are all sorts of circumstances when birds can depart from their normal behaviour; moulting affects the flight and general appearance, wind causes birds to fly differently, and I've found watching sea-birds in inland or quiet conditions completely useless for watching seabirds migrating. Birds on migration find themselves in strange places and behave in strange ways. And overseas, the light is different, birds behave differently, and they look completely different.

So yes, an instinct is useful, but most birders then get down to the serious business of watching properly and going logically and thoughtfully through the features until they are confident of the ID. This is the best way to do it, and its completely the opposite of what Malclom Gladwell says in his book.
Posted by DorsetDipper at 9:29 PM 1 comment:

Collared Flycatcher at Portland and a bank holiday! It's as good as ticked! Except D#1 has to do some revision for an upcoming GCSE exam, so we are staying in East Herts instead.

In the evening I manage to tear D#1 away from her revision - what subject is it exactly that requires extensive surfing of Stardoll.com? - and we go for a cycle ride in the Lee Valley Country Park. We get great views of 4 Hobbies over the reeds, lots of singing around the Electricity substation in which I'm pretty sure was a Nightingale, and of course opposite the Bittern Watch Point was a singing (but whilst I was there unseen) Savi's Warbler. Either that or there was a large crowd listening to a Baritone Gropper.
Posted by DorsetDipper at 8:40 PM 1 comment: