The patch is quite rewarding now with summer birds appearing, and insects increasingly part of the fauna. One particular area got my attention today. 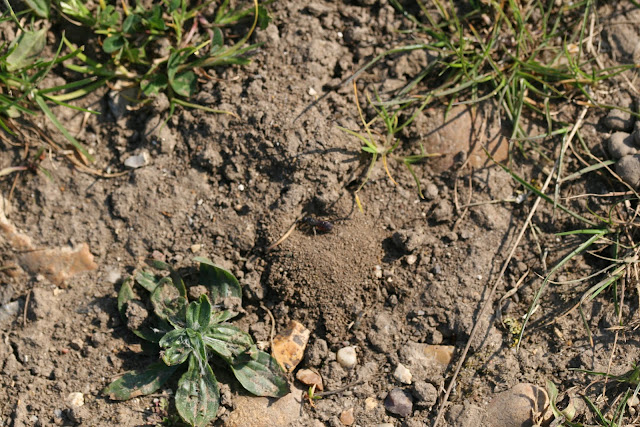 It's a common enough sight - a patch of bare earth with a mass of holes and piles of finely tilled earth. I've seen this for the last couple of years and decided to have a good look.

In the morning it was a mass of small bees. I went back in the afternoon with my camera, and saw other things. Firstly, the bees. Here's one forlornly trying to dig a hole 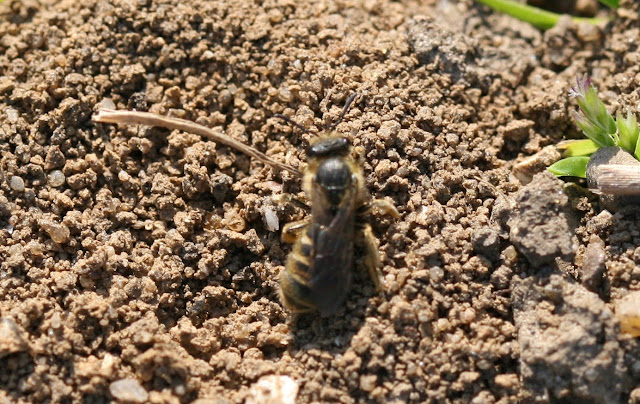 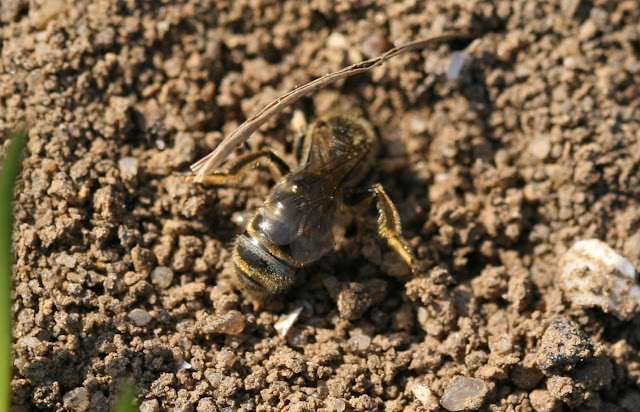 It's quite a tiny bee, and clearly a mining bee, so I think I'm on firmer ground than the bee when I suggest this is a mini-miner. I'm happy to say its probably Common Mining Bee, given that they are, well, common.

In the afternoon there were other different bees. These were even smaller, with bright red abdomens that were only clearly visible in flight. These look like Nomad bees. These are kleptoparasites, and I'm going for Little Nomad Bee, as it is common, and a parasite of Common Mining Bee. Here's a photo of one in flight. Pretty amazing photo too, if I'm honest. It's out of focus, but you try snapping a photo of a tiny bee in flight! 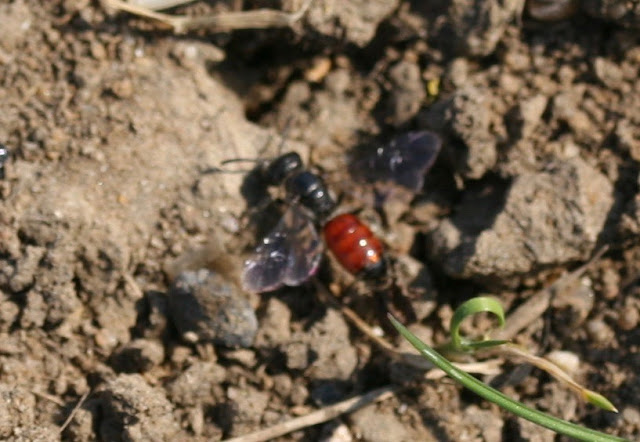 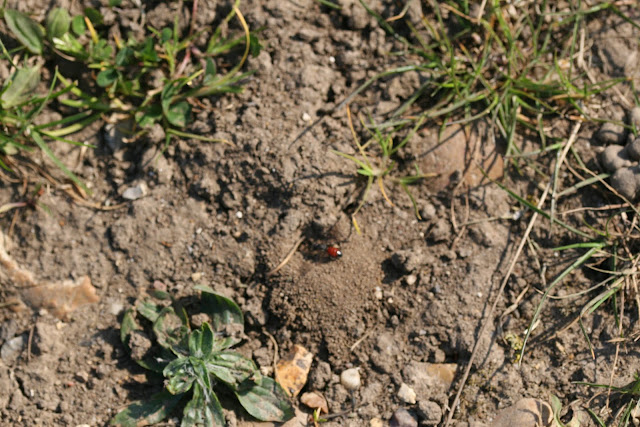 and here's a nomad bee doing what nomad bees do - disappearing down a mining bee nest hole. What goes on down there is, according to wikipedia, as follows "The female cuckoo bee will lay her eggs in the host’s nest and leave. Nomada are known to leave specialized egg structures in the host cell. These eggs are placed into the innermost wall of the host cell, yet there is a lot of diversity among Nomadinae regarding the manner of egg insertion. Some species are known to bury the egg at right angles into the cell wall, while some only partially insert the egg. Nomada may sometimes leave multiple eggs into one host cell, a frequent trait of kleptoparasitic bees. Using their unique mandibles, the parasite larvae kill the host offspring and the conspecific larvae until only one is alive. This larva then steals the host’s allocation of pollen or nectar. "

There were other creatures too - spiders, ants, which I'm thinking are in some way connected with this. It's a pretty amazing thing to think of the lifeforms gathering round this patch of bare earth, and the depths at which life is happening. A veritable insect city, underneath our feet.

Finally a Digger Wasp. We know about these, having had a colony of Ornate Digger Wasps on the patch a couple of years ago. More deep nesting insects, more gruesome life histories. It's all going on. 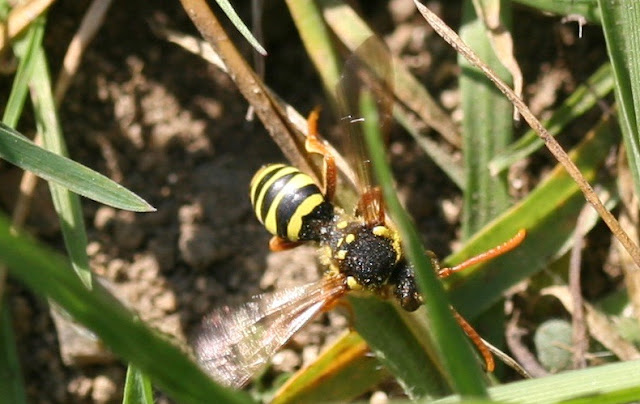 Posted by DorsetDipper at 4:06 PM No comments:

around Pishiobury Park. Birds have been decent, with yesterday a Peregrine, a Sparrowhawk, and a Red Kite before I even entered the park. Today it was bees.

This is, straightforwardly, I think, a female Tawny Mining Bee. 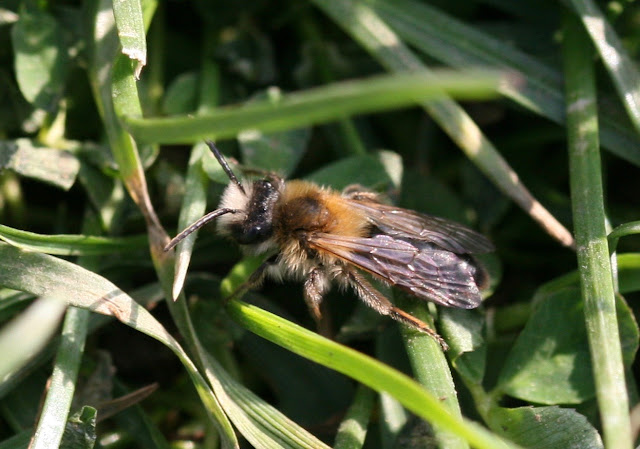 This is, less straightforwardly, a male Tawny Mining bee. 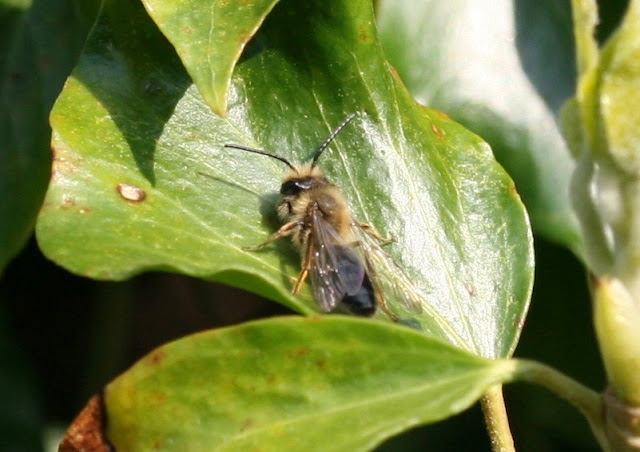 Quite a lot of these on the ivy in the garden. Small - I think these are Chocolate Mining Bee . 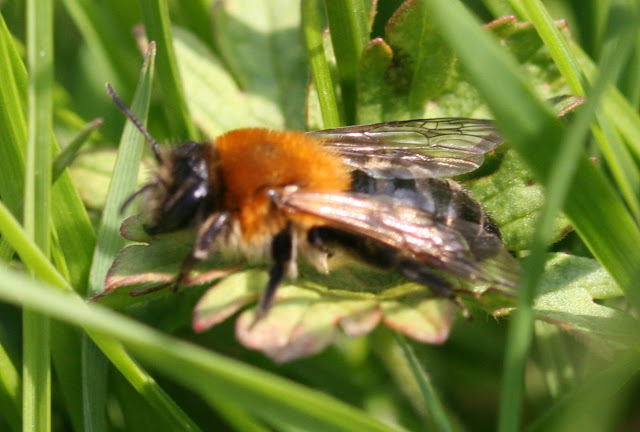 Now. With considerably less conviction, I think this might be female Gwynne's Mining Bee. Except it lacks the furry legs that Steven Falk's photos have.

Finally I have started looking for local Elms, making a note so I can go along later and look for you-know-whats. There are a few clusters locally, one in a place I've been told previously where 'they' occur, and a couple of clusters in the park. Quite easy to see now with these slightly incongruous clumps of red-centred green lollipops on bare branches. 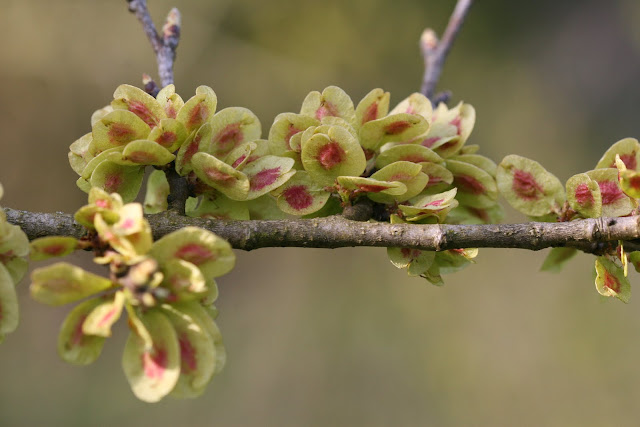 Very finally, because they are everywhere at the moment, some Wild cherry. 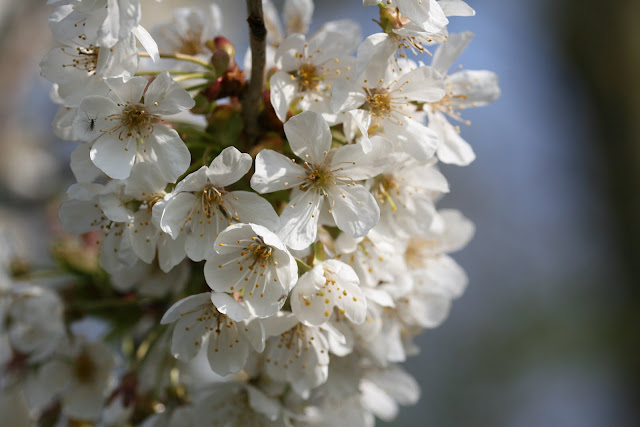 Posted by DorsetDipper at 9:02 PM No comments:

I have a thing about Ring Ouzels. More accurately I have a thing about not seeing them. I've seen enough over the decades, some quite well, and they never fail to excite. If I was to calculate the optimum migrant, the one that is not so rare you hardly ever come across them (think Hoopoe), nor so common you don't really rate them (think Yellow Wagtail or Wheatear), but the one with the best chance of giving you a memorable moment, it would be Ring Ouzel.

Recent Ring Ouzels at regular Herts hotspots gave me the impetus to trudge the intensively farmed and manicured fields of the local "high ground" centred round the Tharbies farm. 6 Fieldfare over as I parked up by the local cemetery, then really not much apart from a couple of Yellowhammers and Skylarks until I got to the top of the rise, and saw some promising brown clumps in a recently ploughed and levelled field. On arriving at a suitable roadside viewing position it was clear these were 21 Golden Plover. And what a sight. Always a neat bird, as they attain summer plumage they are spectacular. These were as close as you can reasonably get to such wary birds (ie the middle of the field from the edge) but nevertheless sparkled gold and solid intense black. Fantastic.

I went on up the road opposite to another high point, and had nothing on the ground but did have 4 Cormorant ploughing their way north through the patch, and a couple of Buzzards rode the thermals.

Back to the Goldies, and more time spent enjoying them. The Buzzards came closer with one over the field, then a raptor behind - Peregrine! It shouldn't be a surprise to see these here, I've seen them here before and they breed within a couple of hours flight, but it was a great sighting. For ten minutes it cruised around with a bit of rapid flight, eventually drifting over my head and away.

Well, after that I was well and truly in the zone; every bird seemed better. Two very charming Blue Tits low over a field to avoid the wind, and another pristine Yellowhammer. All now seemingly significant, not everyday sightings.

So a smashing local trip, with some great views of notable birds, and not a Ring Ouzel anywhere in sight. Next time.
Posted by DorsetDipper at 1:12 PM No comments: