My patch is the few fields just south of Sawbridgeworth. Helpfully labelled "The patch" on the Google Maps screenshot below.

The screenshot shows a few other areas for orientation. The most notable feature is not highlighted but its the river Stort that flows through Bishops Stortford in the top right south to Sawbridgewoerth and Lower Sheering and then swings west to cut across the north of Harlow and meet the River Lee around Roydon. The mass of gravel pits around the Lee provides the areas best known reserves Amwell and Rye Meads. Kings Meads is unmarked but is just west of Ware under the A10.

The Stort valley is fairly wet and frequently holds flood water. I believe this makes the whole area linked up as far as water birds are concerned, and we know of one bird - a Black-Tailed Godwit, that injured its leg on the patch and then turned up at Amwell later. The variety of some of the waterbirds seen on the patch makes sense if you link them with the larger flocks to the west at these reserves.

Finally two more local patches are marked; the high ground is around the old airfield at Allens Green to the north and west of Sawbridgeworth, and in the top right of the screenshot is Hatfield Forest. Just south of this is marked Pincey Brook which in fact runs all the way to join the Stort near Sawbridgeworth, but near Hatfield Broad Oak has an open area of marshland. 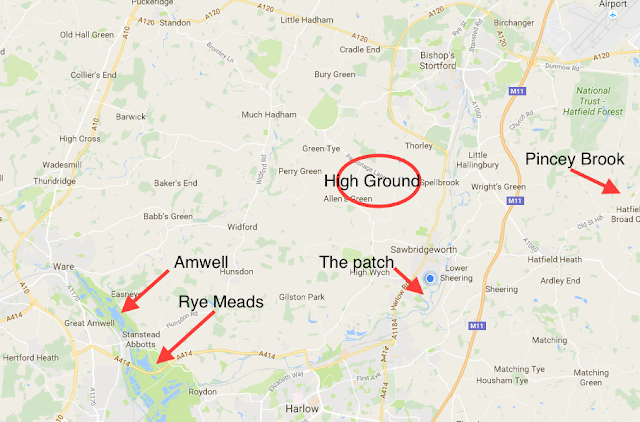 In close up below is that patch itself. I've labelled on some features that frequently occur in write-ups. My standard walking route is shown in white so I will take you on a quick walk. The Google Maps view is over 10 years old and the landscape has changed significantly. The main feature that makes this such a productive small area can already be seen; the land to the east of the railway line is farmed in a modern way, but the land to the west of the railway line up to the Park is used by the farmer for recreation and other projects and has largely been left to go wild.

Start off at the Northern point. From here one can walk into an overgrown field labelled The Impenetrable Forest. At the time of the screenshot this was a field but has been left its own devices and now is a dense mass of hawthorn and other bushes and trees. It is practically impossible to see into this field apart form the path through it.

Out of the forest take a left and walk down to the river. There are a choice of paths and one takes you through the small old woodland with some truly massive trees down to the Stort. The tallest of the trees by the boardwalk is where the Cuckoo usually sings from - hence the name.

The field opposite the river at this point is labelled the Pond. In 2006 this was a grassy meadow. The farmer blocked the drain in the SW corner and a flooded area developed which briefly produced a fantastic wader list. Over the years this has become overgrown and now is a pond with reeds round the edges and bushes all over.

Following the river downstream we come to an area known as Three Bridges, so called because there are three bridges. Two of these are over overflow streams from the river which is a canal at this point (and for the entire length through the patch) and one takes us over the river. I regularly stand by the bridge over the canal looking over the horse field up to the park. There are often horses in this field - hence the name - and there is a slight dip behind to another field and then the mass of trees that lead up to the park.

Crossing the bridge we have a choice. Straight on along the river to Feakes Lock, or through a bush and follow a public footpath up to the railway line. Along the river takes us along a bush and tree lined path to the Lock which is my usual end point. There is a large tree here with usually a Cormorant sat in it. It is possible to walk on about half a mile to overview Old Harlow Meads, but I usually turn back. On occasion I have cheekily walked up the tractor path along the edge of the field by the lock up to the railway line and then north to where the public footpath meets the railway line, but obviously this is private farmland and not a public right of way.

There is a stile and walk way over the railway line here. Check the signals, and don't cross if one of them is green. The Stansted express can come round the corner very quickly. It is possible to walk on up to Lower Sheering Road, and carry on for a field or so to look back and down over the patch.

Returning to the three bridges area my walk back to the village takes a public path along a small stream up towards the park. This is a damp area so boots or wellies are essential at most times of the year. We meet the park in the Eastern corner where there is a small but rich woodland called Nursery Wood. There is a bench here where you can sit and look over the patch, but usually I return walking the path along the back of the houses to the start.

The Park is a significant area but is mainly open grassland. I often walk here with Mrs D and the three dogs. Its a great park to meet other dog walkers and have a pleasant chat, but birds are scarcer here. There is a central line of tall trees along a high point, then down in a dip a tall overgrown hedgerow with a pond and some scrub at the SW end which is the best area for birds in the park. 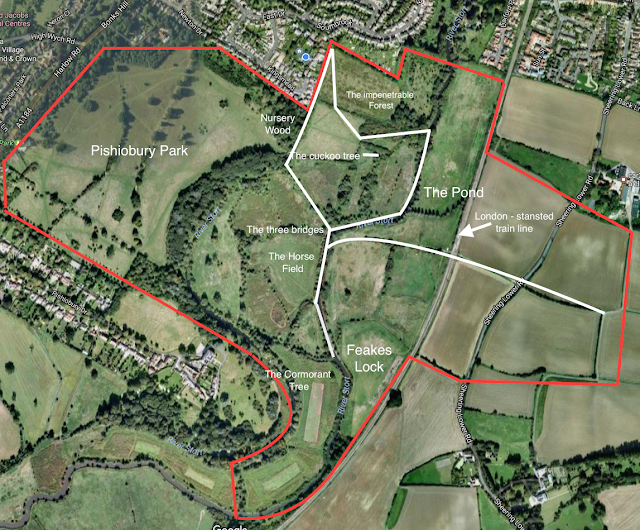 So that's the patch. I will in the next few posts revisit this walk with more detail in the birds seen here in 2016.
Posted by DorsetDipper at 8:28 AM

Well that's the 'starter course' post, now for the main meal... bring it on Dipper!