Day 1 (16th) . A bright, cool day with some SW breeze. Portland Harbour held a Great Northern Diver, a Slavonian Grebe, and 5 Black-Necked Grebes. There were fewer Red-Breasted Mergansers than in previous winters, and a Shag was new for the year.  At Ferrybridge there was 12 Dark Bellied Brent Geese, a few Mediterranean Gulls, and a Sandwich Tern. And absolutely no waders. Then Lodmoor which was fairly quiet although there were 4 Wigeon which I don't often see here, a Marsh Harrier, and offshore a male Common Scoter.

Portland Bill - Gannet, Fulmar, Guillemot and a single Kittiwake were all year ticks, onshore a flock of 10 Rock Pipits, the Obs quarry Little Owl, and up on the top fields a single Short-Eared Owl hunted the fields as the sun began to dip in the west.

Finally Raven. A bird of the wilderness, of the highest, remotest mountain tops, of sheer crags, and of tables at cafes.  I was quite taken aback to see a pair going through the detritus outside the cafe. If I had been sitting on a chair, I would have fallen off it. Close up, in the presence of Jackdaws, they were huge, great glossy black beasts. One flew off in that languid, relaxed way they have, as if they are making a point of it, but the other remained for some poor snaps. 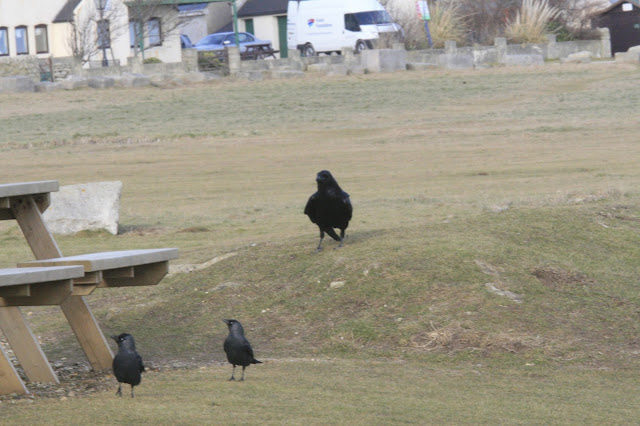 Day 2. Dull, wet. I was going for the GGS at Wareham Forest, but gave that up as a bad job due to the rain. On to RSPB Arne for my first visit, but not, I hope, my last. A smashing reserve with a mixture of scarce habitats. The weather was awful; every time I looked at a bird it was a black blob against a white background through misted-up optics. Nevertheless I got what is a first for me, a Spoonbill that wasn't asleep. It flew in, did that swish-swish feeding thing, throwing up a few morsels in its spatula beak, and then flew off over a party of 20 Avocets. Otherwise it was some woodland birds including a  pair of Treecreepers chasing each other through the trees. One stopped and I guess saw me, because it froze at an awkward angle against a branch, seemingly waiting for me to move on, which I duly did.

Lots added to the YL which now stands at 114. The crawl round the M25 was made more passable by some appropriate music, and what could be more appropriate in they year of rain than When The Levee Breaks?

Posted by DorsetDipper at 8:26 AM