A mid-day walk round the usual South Sawbo. It was quiet, possibly due to the prolonged deluge yesterday. Of bird note were c20 Stock Doves, 3 Linnet , 1 Yellowhammer, and a Common Tern amd a Kingfisher that were both seen over a field; the tern coming from distance and the kingfisher cutting a corner.

A number of butterflies and dragonflies were out as well as a variety of bees. I  saw the one below on the path by the park and took the usual out-of-focus close up, but I think it is Bombus Rupestris, common name either Hill Cuckoo Bee or Red-Tailed Cuckoo Bee. It was lounging around not doing much, which is apparently what Cuckoo bees do as they leave rearing the young to the host bee (hence the name). From an id point of view it has a shiny hairless back and dark wings that are apprently characteristic of cuckoo bees. 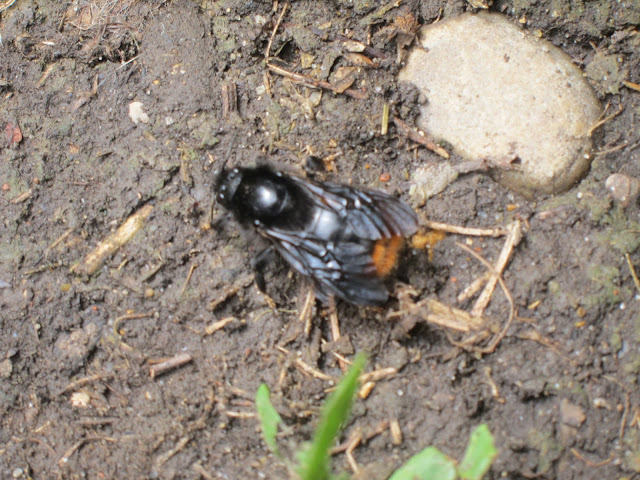 So what of the host? I reads that cuckoo bees lay their eggs in the nest of one species only, and for Rupestris this is Bombus Lapidarius the Red-Tailed Bumble Bee. This is a frequently seen bee, and we have a nest in the garden - its a hole in the ground under a bush. The bush itself has a number of bumblebees on it - mainly Tree Bumblebee and the other white and yellow banded ones, but not Red-Tailed. I had seen the workers coming and going for a few days, but on a visit last week found a queen staggering around the lawn near the nest not seeming to know where it was going. There were lots of white dots all over the back, and I thought this may be some kind of parasite. A quick look on the net and it would seem to be mites which I read may not be too harmful for the bee, so possibly not the reason fot the poor state of this creature. 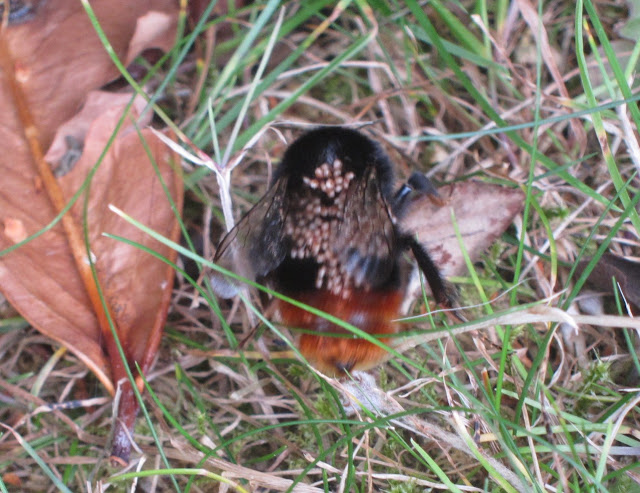 Bees are a recent addition to my list of wildlife interests, and its been like my first year or so of birdwatching, in that the books don't seem to describe what I am looking at, and there is lots of scope for variation not covered by a few pictures in a guide. Its fun to be back at the start of the learning process, and I will no doubt be making lots of mistakes.

Finally a tune in honour of yesterday's deluge.

Posted by DorsetDipper at 6:37 PM